NORTH SOUND, Antigua – West Indies batting was blown away by a devastating spell of fast bowling from Jasprit Bumrah and they slumped to a 318-run loss – their fifth heaviest Test defeat ever – against India in the first MyTeam11 Test co-sponsored by Skoda and KEI.

Chasing a highly improbable, if not impossible target of 419 to win after India declared their second innings on 343 for seven, the #MenInMaroon were dismissed for exactly 100 about 20 minutes before the scheduled close on the penultimate day of the contest at the Vivian Richards Cricket Ground here.

Kemar Roach, batting at nine, hit the top score of 38, but no other passed 20, as Bumrah captured 5-7 from eight overs to destroy the home team’s batting to hand India a 1-0 lead in the two-Test series, but more importantly, full 60 points in the newly-minted ICC World Test Championship. 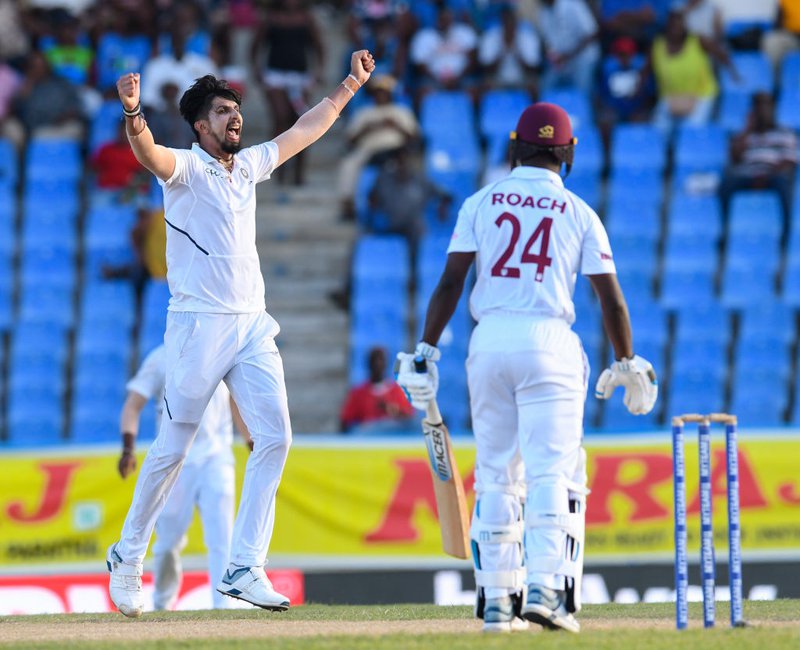 The match came to a close, when Roach was caught at backward square leg by wicketkeeper Rishabh Pant from a miscued hook off Ishant Sharma, who ended with 3-31 from 9.5 overs to finish the match with eight scalps.

The second Test between the two sides starts on Friday at Sabina Park in the Jamaica capital of Kingston.

This followed a hard grind for West Indies, as Ajinkya Rahane gathered his 10th Test hundred of 102 and Hanuma Vihari hit a career-best 93, sharing 135 for the fifth wicket to extend India’s lead before they declared their second innings about an hour and five minutes after lunch.

West Indies chased started disastrously, as they crumbled to 15 for five at tea with the cream of their batting out of the way, as Bumrah and Sharma carved up their top order.

Kraigg Brathwaite was caught behind for one off Bumrah in the second over of the innings, after he was squared up and touched a delivery outside the off-stump.

John Campbell was bowled seven in Bumrah’s second over, playing a loose drive at a full-length delivery. 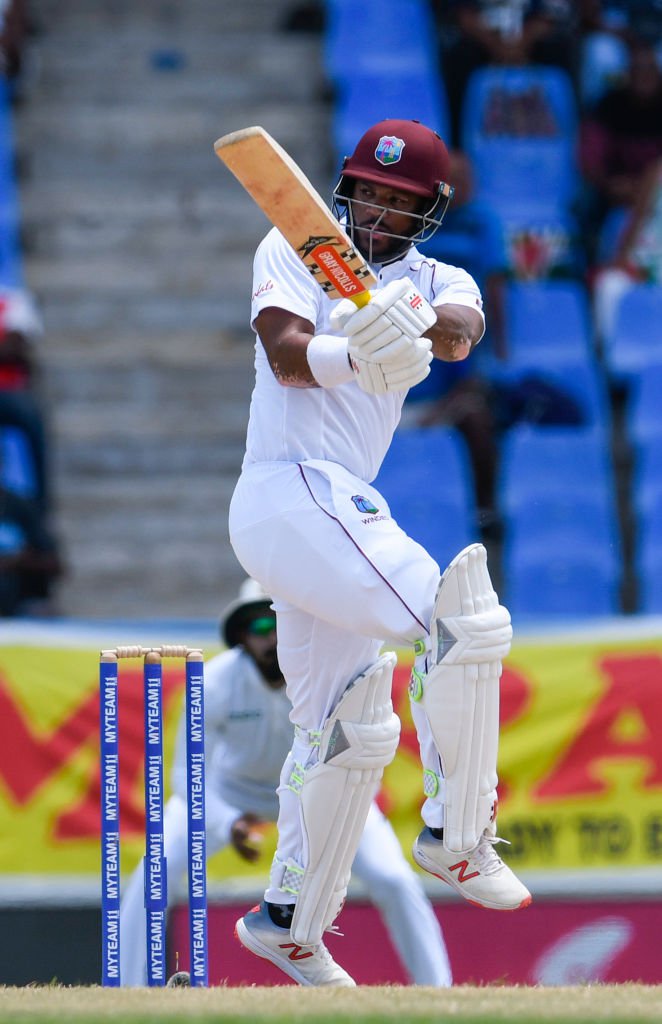 Shamarh Brooks was lbw for two, playing back and across a full-length delivery in Sharma’s third over.

Shimron Hetmyer was caught at gully for one, slicing a drive at a delivery angled across by the same bowler in his fourth over. 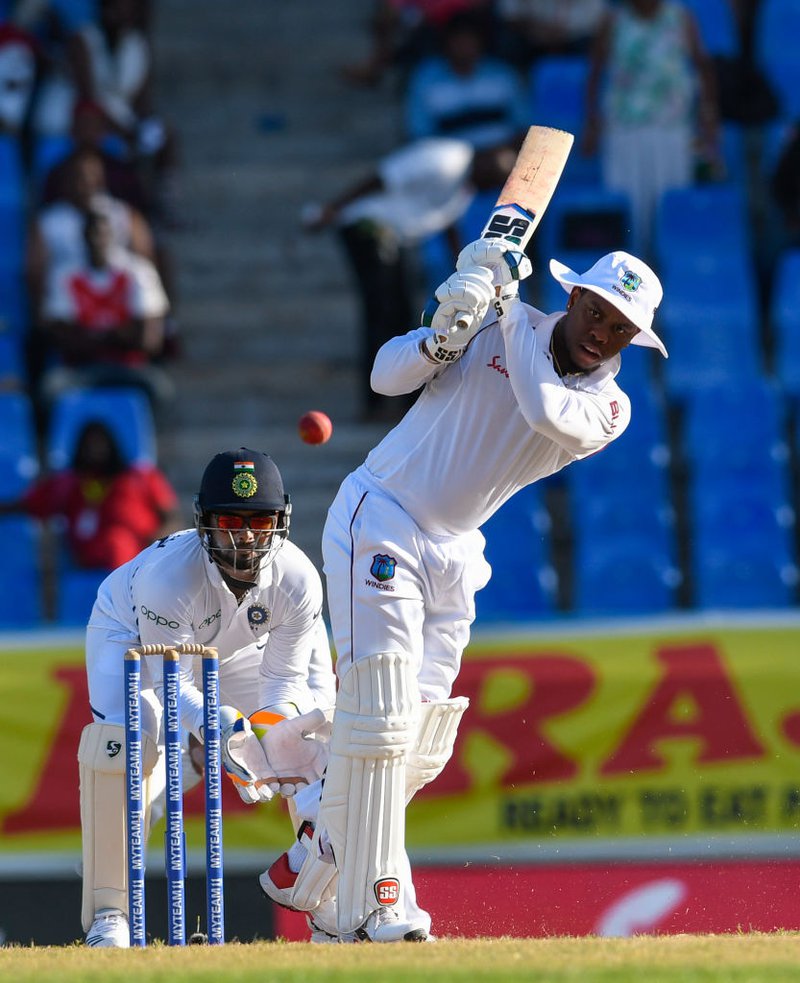 And, Darren Bravo was comprehensively beaten and bowled by Bumrah for two in their eight over of the innings on the stroke of tea.

After the break, West Indies looked in danger of falling for their lowest total ever in Tests, when Shai Hope was bowled by Bumrah for two, playing down the wrong line, and their captain Jason Holder was bowled for eight by a yorker from the unorthodox Indian pacer to leave the home team 37 for seven.

Roston Chase, the top-scorer in the first innings, was the only top-order batsman to reach double figure for the Caribbean side, scoring 12 and taking them past their lowest total ever in Tests in concert with Roach, before Mohammed Shami too, bowled him. 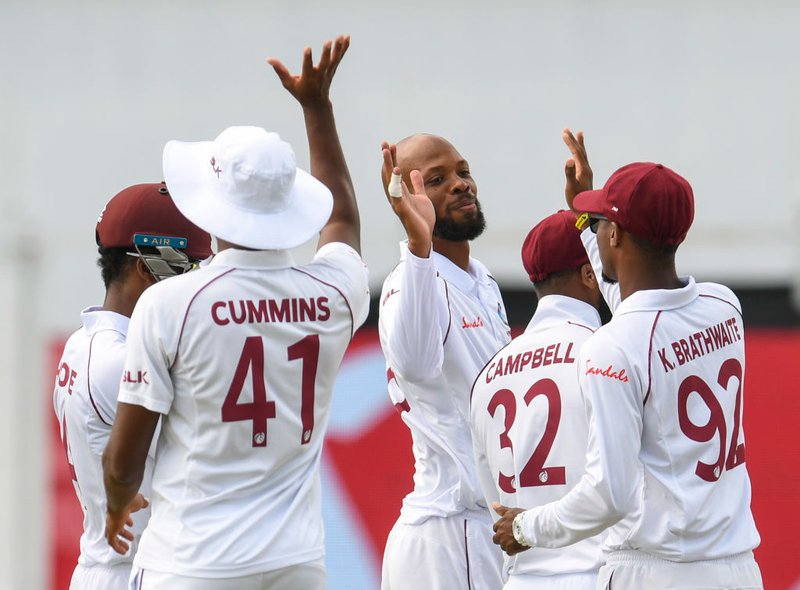 West Indies were 50 for eight and slumped further when Shannon Gabriel was caught behind off Shami four balls later in the same over without addition to the total.

There was the typical late, tail-enders’ flourish from Roach, as he smashed one four and five sixes – three in the last left-arm spinner Ravindra Jadeja’s fourth and final over – before his dismissal brought the curtain down.

Earlier, West Indies gained an early breakthrough, after India resumed from their overnight total of 185 for three.

Chase, bowling his uncomplicated off-spin, had India’s captain and star batsman Virat Kohli caught at extra cover without addition to his overnight total of 51, from a leading edge.

For close to 2 ½ hours either side of lunch, West Indies were frustrated by Rahane and Vihari, as the pair batted India into a commanding position.

West Indies failed to come close to creating a ghost of chance to remove either of the batsmen, as they wore down the home team’s attack with circumspect batting.

The perseverant Roach saw Rahane tuck into square leg for a single to reach his first hundred in two years for India before Shannon Gabriel had him caught at mid-off.

Chase, whose 4-132 from 38 overs made him the most successful West Indies bowler, grabbed the scalp of Pant caught at deep square leg for seven before Vihari, trying to force the scoring to reach his maiden Test hundred, gloved a delivery going down the leg-side and was caught behind off Holder to signal the end of the Indian innings.

Check out extended highlights below!