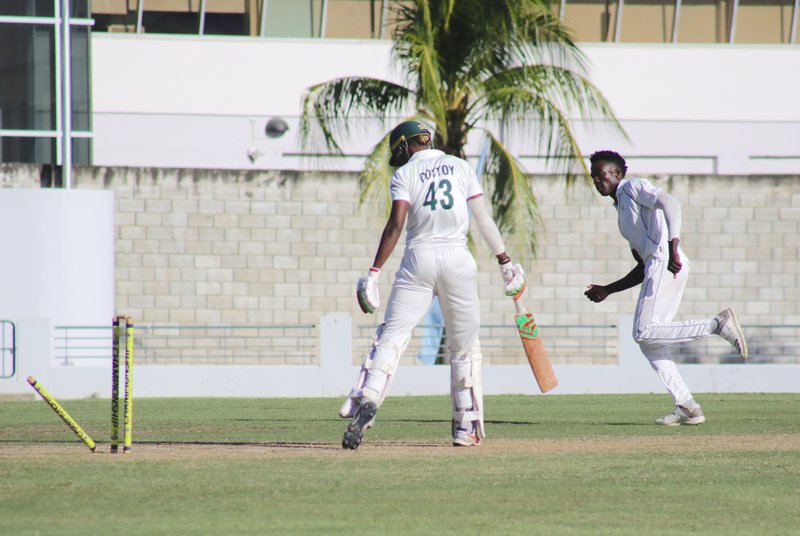 The former West Indies Under-19 World Cup-winning fast bowler bagged 5-73 from 16 overs to undermine the Volcanoes batting and earn the Pride a first innings lead of 159 on the second day of sixth round matches in the Championship.

Scorpions (216) vs Jaguars 287-6 at the Trelawny Multiplex in Florence Hall, Jamaica

Singh was not out on 93 and passed 3,000 career runs in the Championship to lay the groundwork for a strong Jaguars reply. He now has 3,091 career runs.

But Hemraj made 82 and played a pivotal role in putting the Jags in such a comfortable position with successive half-century stands in the company of fellow left-handers Leon Johnson and Singh.

Johnson, the Jaguars captain, made 35 and shared 60 for the second wicket with Hemraj, who followed up with a 98-run stand with Singh.

Jaguars were 179 for four, after Hemraj and Christopher Barnwell fell to spinner Patrick Harty Jr in the space of three deliveries.

Left-arm chinaman spinner Dennis Bulli has been the most successful Scorpions bowler with 3-84 from 20 overs and Harty has 2-67 from the same number of overs.

In the feature match of the round, Holder again bowled with pace and hostility to upset the flow of the Volcanoes innings and transform the complexion of the match.

He carried his tally of scalps for the season to 29, which kept him second on the list of wicket-takers – eight behind Guyana Jaguars left-arm spinner Veerasammy Permaul – and makes him the most successful pacer in the Championship to date.

Volcanoes captain Kavem Hodge had the top score of 53 for his side, Andre Fletcher supported with 52, Preston McSween hit a cavalier 47 batting at 10, Devon Smith made 21 and fellow opener Desron Maloney got 21 before he retired hurt after a blow to the helmet from Holder, which brought Alick Athanaze into the game as a concussion replacement.

Volcanoes started comfortably before the injury to Maloney prompted a fractionally earlier than scheduled lunch with the visitors on 33 without loss and Pride were kept waiting for the breakthrough after the interval before Holder had Smith caught behind.

The visitors were 66 for one before Fletcher featured in two significant stands that put the Pride on their heels and carried Volcanoes past the 150 mark. He added 50 with Hodge for the second wicket and 49 with Cato for the third wicket before Holder had him caught at first slip.

Volcanoes were 165 for three and that became 192 for eight in a jiffy with Holder adding the scalps of Cato, Athanaze and Keron Cottoy in a destructive post-tea spell.

McSween came to the crease and frustrated the Pride in a ninth wicket stand of 65 with Ray Jordan and earned the visitors two batting points before pacer Keon Harding brought the fun to an end with two wickets in three balls.

Pride openers Kraigg Brathwaite, not out on five, and Shayne Moseley, not out on one, batted one over before stumps were drawn.

Earlier, Pride earned full batting bonus points for the first time in the Professional Cricket League era of the Championship before their first innings ended about 55 minutes before lunch.

Resuming from their overnight total of 357 for seven, Pride earned the bonus points thanks to a late flourish of 27 not out from Harding, after century-maker Kyle Mayers was dismissed for 140.

Jangoo, drawing his intimate knowledge of the opposition, was not out on 72 and holding the Hurricanes innings together, after another top-order batting failure.

Hurricanes stumbled to 30 for three and had lost half of their batting before they reached 100 before Jangoo dominated a stand of 48 – unbroken – for the sixth wicket with Jaison Peters to halt the slide.

Earlier, rookie Terrance Hinds was not out on 89 – 11 short of his second hundred of the season – to lead a rearguard action for Red Force, extending the visitors’ first innings just past lunch.

Khary Pierre made 35 and was a steady ally for Hinds. They added 106 for the eighth wicket to frustrate the Hurricanes, after Red Force resumed from their overnight total of 161 for seven.

Pierre fell to pacer Nino Henry, but Hinds anchored an annoying stand of 27 with Uthman Muhammad before West Indies off-spinner Rahkeem Cornwall and fellow tweaker Terance Warde shared the last two scalps to bring the innings to a close in the space of nine balls.