KINGSTON, Jamaica – West Indies were floored, when Jasprit Bumrah became the third Indian to snatch a hat-trick in Tests, as he once again shredded their batting with a devastating spell of swing bowling in the second MyTeam11 Test co-sponsored by Skoda and KEI.

Catch up with the Bitesize Highlights below!

West Indies slumped to 87 for seven at the close, replying to India’s first innings total of 416, at the close on the second day at Sabina Park. 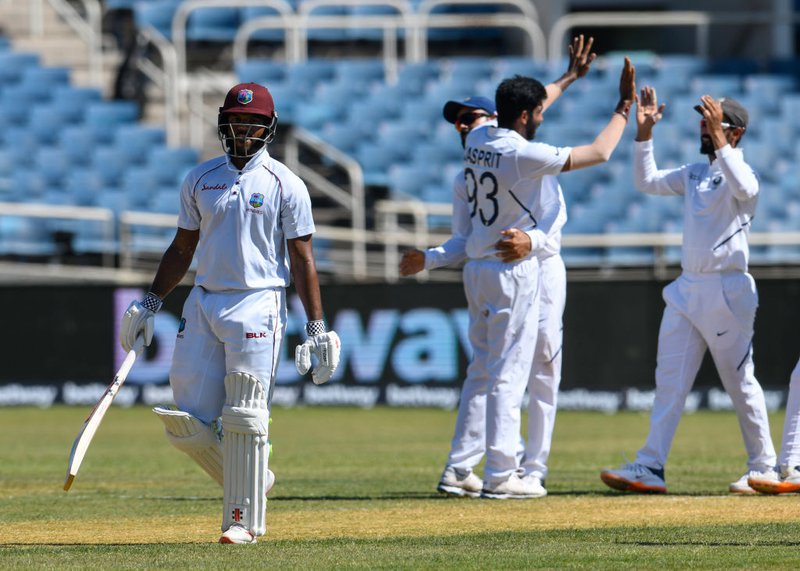 As they did in the second innings of the first Test last week in Antigua, West Indies crumbled to Bumrah once again, as he scythed through the top order to finish with six for 16.

Only left-hander Shimron Hetmyer with 34 provided any resistance and was the only batsman to pass 20 and one of just three to reach double figures, as West Indies once again showed little mettle against high class fast bowling.

West Indies were making their way quietly in reply with vice-captain Kraigg Brathwaite and John Campbell employing a cautious approach when Bumrah, after two luckless overs from the Michael Holding End, switched to the Courtney Walsh End and suddenly threw the innings into turmoil.

With his fourth delivery, he got one to leave the left-handed Campbell with the angle, leaving wicketkeeper Rishabh Pant to complete a regulation catch at nine for one. 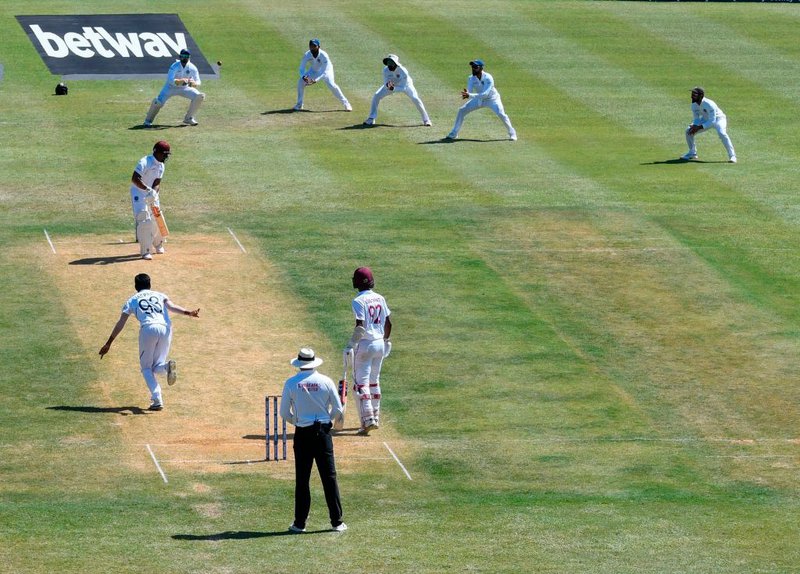 It was in Bumrah’s next over that he broke the backbone of the West Indies batting, removing Darren Bravo for four, as well as Shamarh Brooks and Roston Chase for first-ball ducks with successive deliveries to become the first Indian in 13 years to grab a hat-trick in the longest format of the sport.

With the second ball, he found Bravo’s edge with a beauty of an away-swinger, for K.L. Rahul to pouch the chance low at second slip, before trapping Brooks lbw with a full-length delivery that dipped in. 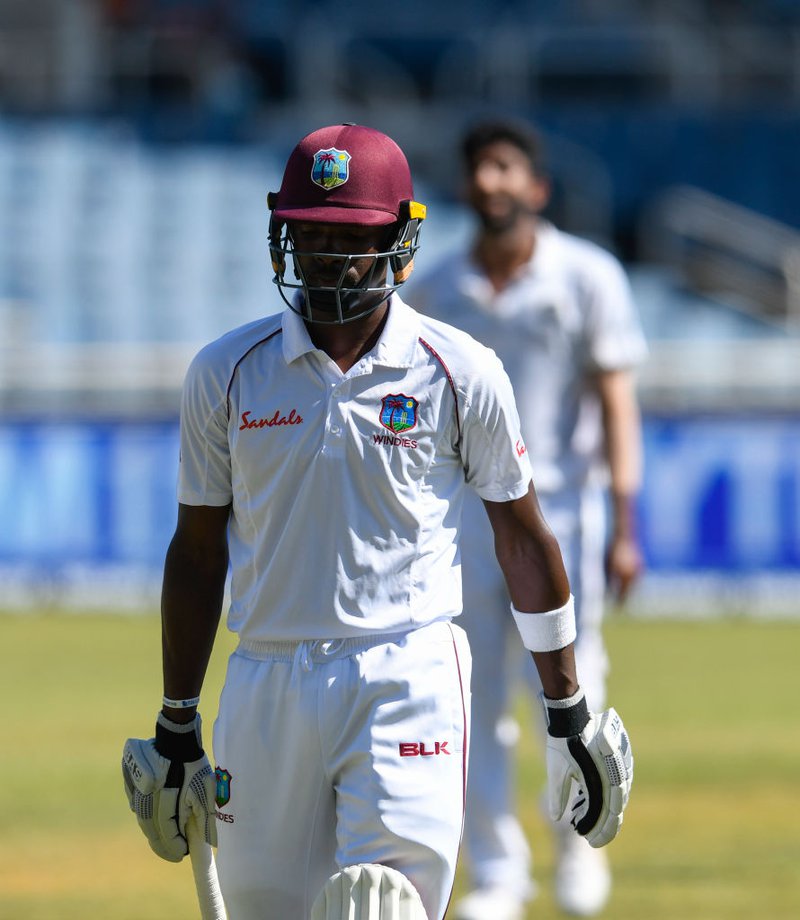 With the hat-trick delivery, Bumrah struck Chase on the toes with another full length in-swinger, but looked disinterested after the initial lbw appeal was turned down. But India captain Virat Kohli reviewed however, and DRS confirmed Chase was adjacent.

Bumrah joined Harbhajan Singh (2001) and Irfan Pathan (2006) as the two previous Indians to have achieved the feat. 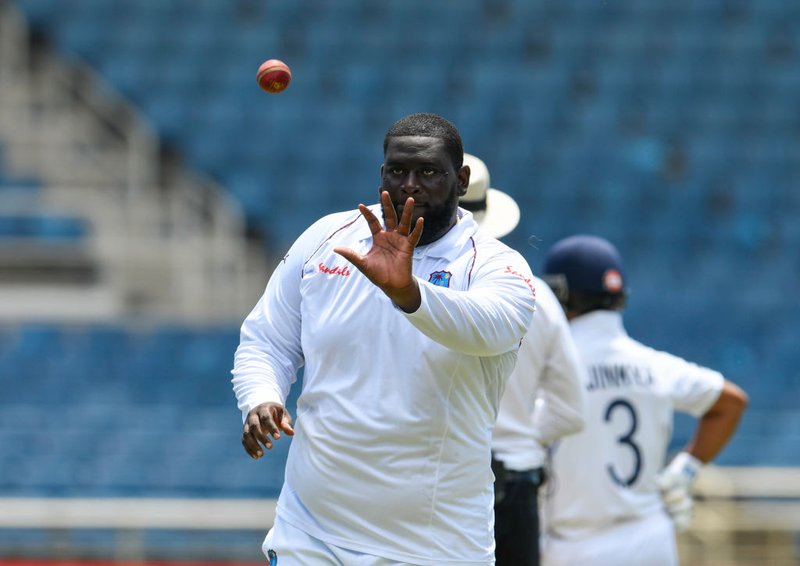 But the gloss on their performance was wiped away, as Hanuma Vihari completed his maiden Test hundred as India, resuming the day on 264 for five, overcame a stumbling start to bat themselves into a near impregnable position.

West Indies struck with the day’s first ball, when Holder brought a delivery back between bat and pad to bowl Pant for his overnight 27. 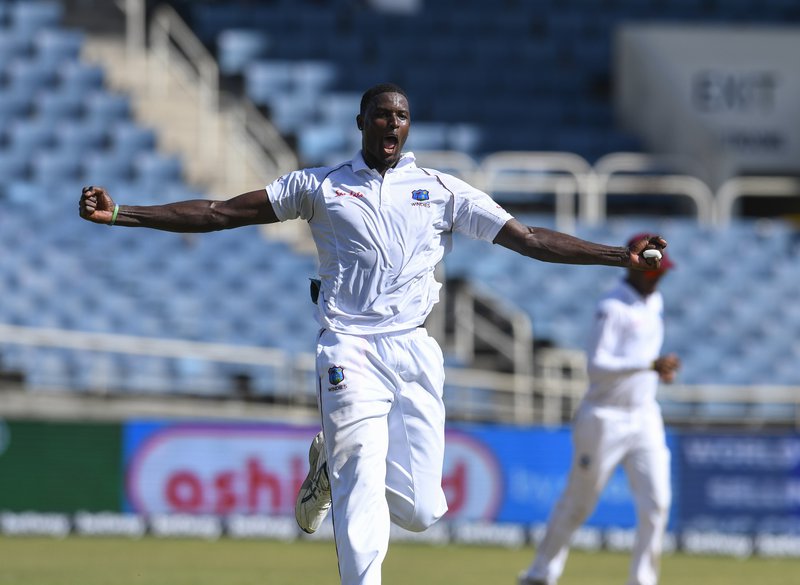 But West Indies were kept without success for the remainder of the hour, when Vihari combined with Ravindra Jadeja to add 38 for the seventh wicket.

Cornwall made the breakthrough, having Jadeja caught at mid-on, but yet again, the home team found themselves frustrated, as Vihari and Ishant Sharma staged a brilliant 112-run, eighth-wicket stand which took India to lunch on 336 for seven.

Vihari reached three figures in the second session with a sharp single into the on-side off Kemar Roach. All told, he faced 228 deliveries and struck 17 fours.

Ishant, unbeaten at lunch on 11, quickened his scoring after the interval to hit seven fours in an 80-ball knock before he was caught at deep mid-wicket off part-time off-spinner Kraigg Brathwaite at 414 for eight.

The end came quickly as Mohammed Shami edged a cut and was caught behind off Cornwall without scoring before Vihari was last out, failing to clear Roach at mid-off with Holder.

Have a look at the extended highlights below: