NORTH SOUND, Antigua – West Indies bid to take control of the first MyTeam11 Test – co-sponsored by Skoda and KEI – was undermined by a destructive spell from Ishant Sharma that handed the advantage to India.

Captain Jason Holder held his nerve in the last half-hour to remain not out on 10 and Miguel Cummins was not out on zero, as the #MenInMaroon reached 189 for eight, replying to India’s first innings total of 297, when stumps were drawn on an elongated second day of the contest at the Sir Vivian Richards Cricket Ground here.

Looking to finish the day strongly having reached 174 for five, the home team lost three wickets – all to Sharma – for five runs in the space of 17 deliveries in a dramatic 15-minute period to lose their way in the closing stages.

All of their frontline batsmen got starts, but none carried on – Roston Chase led the way with 48, Shimron Hetmyer made 35, Shai Hope got 24 and left-handed opener John Campbell added 23. 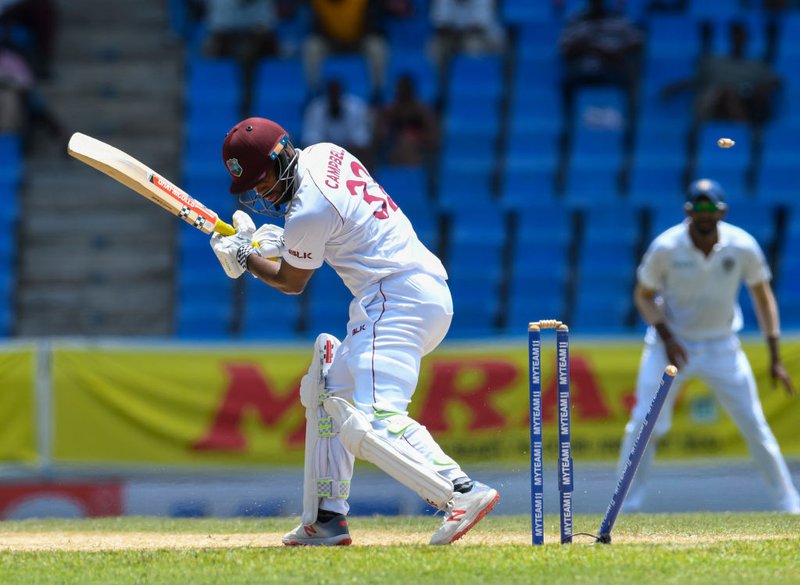 Most of the home team’s batsmen fell to flawed strokes, rather than fabulous bowling, as Sharma ended the day with 5-42 from 13 overs to rip the heart out of their batting.

This followed a frustrating morning period for West Indies, when Sharma was again a thorn in their side, as he and Ravindra Jadeja shared a defiant eighth wicket stand to help India add a further 94 to their overnight total before they were bowled out on the stroke of lunch.

Kemar Roach was the most successful bowler for the Caribbean side, taking 4-66 from 25 overs, Shannon Gabriel supported with 3-71 from 22 overs and Chase grabbed 2-58 from 16 overs. 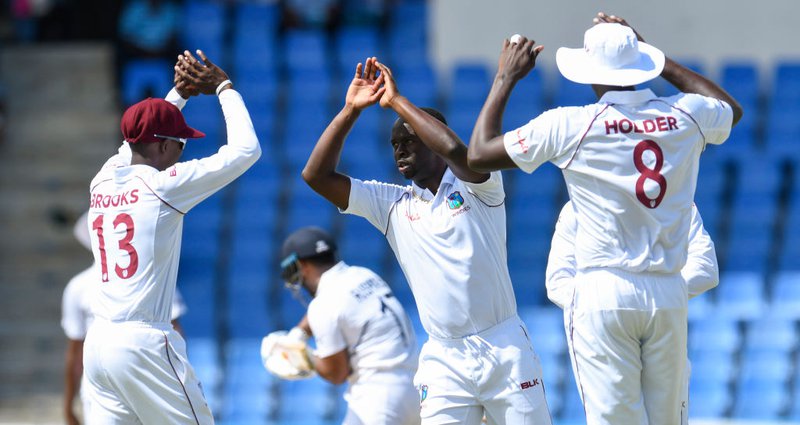 Starting immediately after the interval, Campbell gave West Indies a typically rollicking start, slamming a few crisp early boundaries, including a searing drive over the top of extra cover off Sharma, before he was bowled, playing on a full-length delivery from Mohammed Shami.

This brought Test newcomer Shamarh Brooks to the crease, and for close to an hour, he and compatriot Kraigg Brathwaite defied the Indian attack before they were dismissed in the space of 17 deliveries.

Brathwaite drove a firm return catch to Sharma and Brooks was caught at slip, after he edged a loose, back-foot drive off left-arm spinner Jadeja and the ball ricocheted to an alert Ajinkya Rahane to leave the hosts 50 for three.

Roston Chase came to the crease and with left-hander Darren Bravo carried West Indies to 82 for three at tea with little trouble.

But Bravo was lbw to Bumrah for 18, moving too far inside the line and looking to play into the leg-side in the second over after the break, leaving the home team on 88 for four.

For close to an hour, Chase consolidated with Hope, taking West Indies past the 100-run mark, with no trouble, before he turned a delivery from Sharma to into the lap of the mid-wicket fielder and was caught. 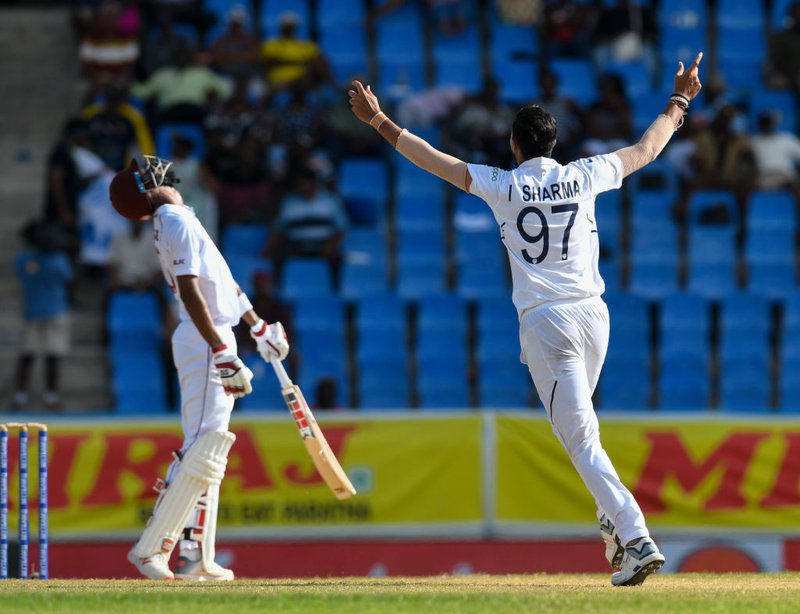 Hetmyer joined Hope with the aim of probably carrying the hosts through until the close and come back on the third day, looking to push on.

They spent close to 1 ½ hours putting on 44 for the sixth, when Sharma produced the perfect delivery for the last ball of his 11th over. It was well-pitched, moving away, and Hope was drawn into playing forward, edged and was caught behind.

Things unravelled for West Indies, when Sharma struck with the first and last deliveries of his next over. First, Hetmyer drove a firm return catch low to him, and Kemar Roach edged a loose drive at a wide ball and was caught at second slip.

Earlier, Kemar Roach gave West Indies an early scalp, after India resumed from their bedtime total of 203 for six, when he had Rishabh Pant caught at second slip for 20. 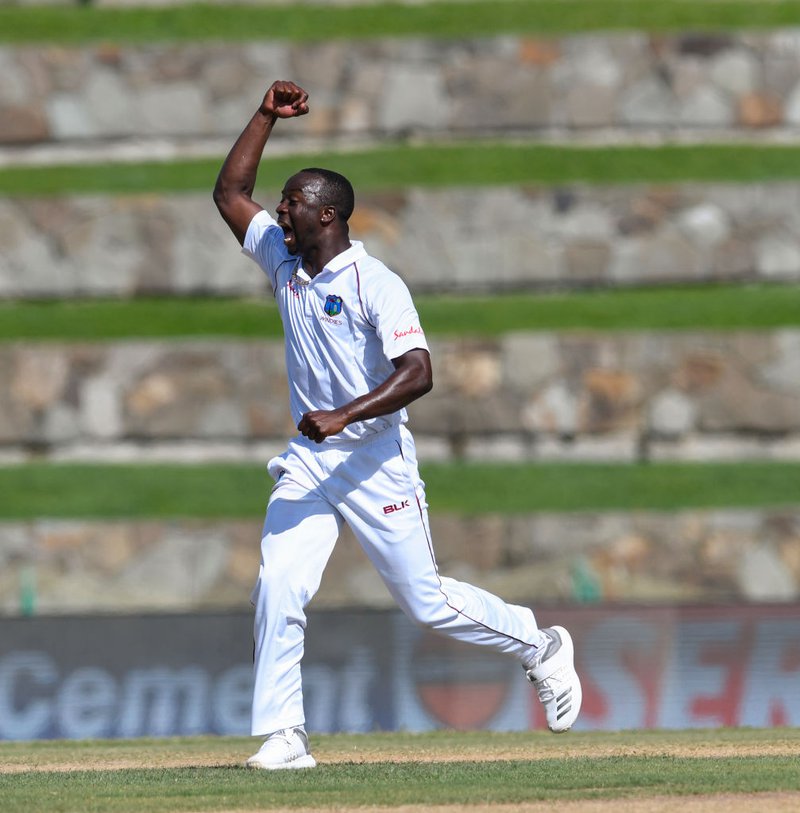 For just over 1 ½ hours however, Sharma came to the crease and resisted the home team’s attack to put on 60 with Jadeja and extended the visitors’ innings.

Shannon Gabriel finally broke the partnership, when Sharma played on and was bowled for 19, Shami gave a return catch to Chase in the following over before Holder brought the innings to a close six overs later, when he had Jadeja caught by ‘keeper Hope from a miscued hook. 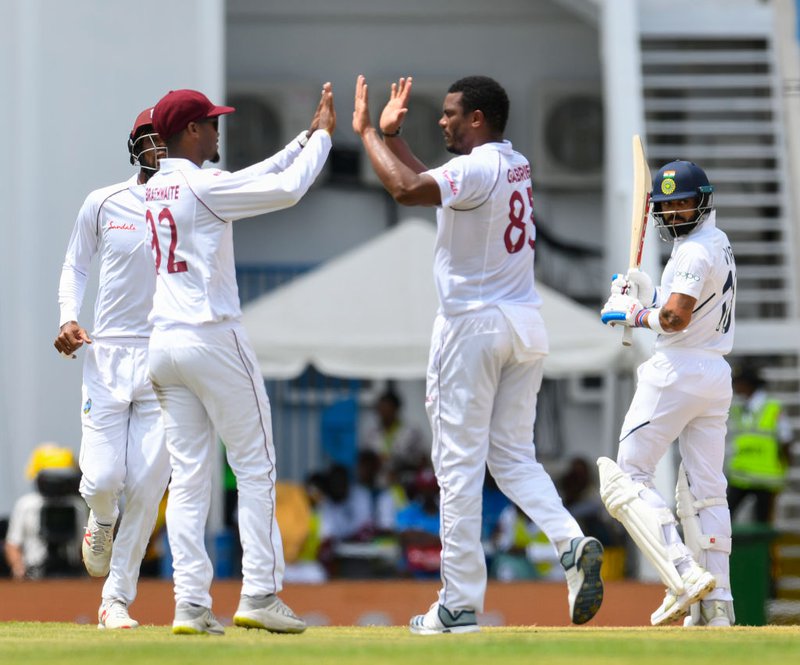 Catch up on extended highlights below!