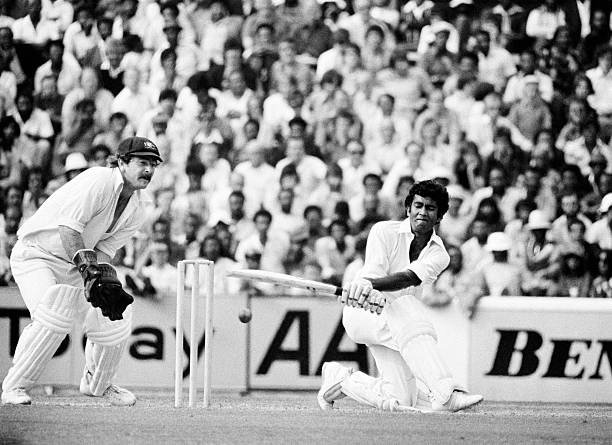 West Indies had already secured their semi-final place in the 1975 World Cup following wins against Sri Lanka who were making their World debut at the time and the Deryck Murray/Andy Roberts inspired victory versus Pakistan.

As they awaited to find out whether their semi-final opponent would either be hosts England or New Zealand, West Indies locked horns with Ian Chappell's Australia, in what ended up being a classic 1975 World Cup final dress rehearsal.

Lloyd on watching Kallicharan bat from the pavilion:

One-day cricket has changed a lot since 1975, but chasing a sub 200 total when we restricted Australia to 192, in any era of cricket a team would take that. We never really sat down and had conversations during games, but rather watched very attentively and that's what we all certainly did when Alvin got going.

Alvin played some amazing shots against Dennis. The faster he bowled, the faster Alvin tried to hit him. Roy Fredericks also scored a solid attacking fifty, but the ferocity of Alvin's knock has often meant Roy's innings was at times forgotten.

Lloyd on Kallicharran versus Lillee:

Lille's was one the games greatest bowlers, but compared to his bowling partner Jeff Thompson, he was relatively easier to face due to the smoothness of his action and clear visibility of the ball in his hand when facing him.

So from a batting standpoint it could be said that in the moment, this become a minor weakness for Dennis and aided Alvin in playing those shots against him with such confidence.

Alvin was a extremely talented player who I always enjoyed having in my team. I saw his ability first hand when we were younger coming in Guyana when he played for Berbice in Inter- County cricket, [when we played together] in Guyana’s national team and in English county cricket when he played for Warwickshire while I was with Lancashire.

Up to that point I hadn’t seen Lillee taken to by a batsman in international cricket outside of when the great Sir Gary Sobers made 254 for the World XI against Australia in 1972.

The West Indian immigrant community support was huge every time we played in England, but throughout the 1975 World Cup it was extra special. The better we performed the louder they cheered every game and I've always felt the noise they made during Kallicharran’s innings was probably the louder than when we won the final.

Australia definitely felt more like the visitors because it was our home-away-from-home crowd.

If the Pakistan win made team feel that we could win the World Cup, beating Ian Chappell’s Australia in such a comprehensive manner heading into semi-finals probably made the opposition sides accept in their minds we had arrived as a team and were cup favourites.

Have a look back at the scorecard here.