Sports and Academics - The Perfect Recipe

COMBINED CAMPUSES & COLLEGES MAROONERS capture of the 2018-19 West Indies Super50 Cup has been hailed widely throughout the Caribbean.

The team, led by WINDIES Twenty20 International captain Carlos Brathwaite, has gone a long way to debunk the long-held view in the region that sport and academics cannot mix.

After playing impressively to brush aside 10-time champions Guyana Jaguars in the Grand Final at Kensington Oval, Brathwaite said it was one of the pre-tournament challenges that the side had to overcome on their way to tournament success.

“It was challenging and a bit of an eye-opener for me,” said Brathwaite. “I remember inviting Jonathan Drakes out for a drink before the tournament and he told me: ‘Skip, I apologise, but I have to hand in a lab the next day’.

“On the global (Twenty20) franchise circuit, you can take things for granted – we play, we train and we return to the hotel. Some of these guys however, have to play, train and do assignments and meet deadlines, so to overcome all of challenges like that makes our victory sweeter.” 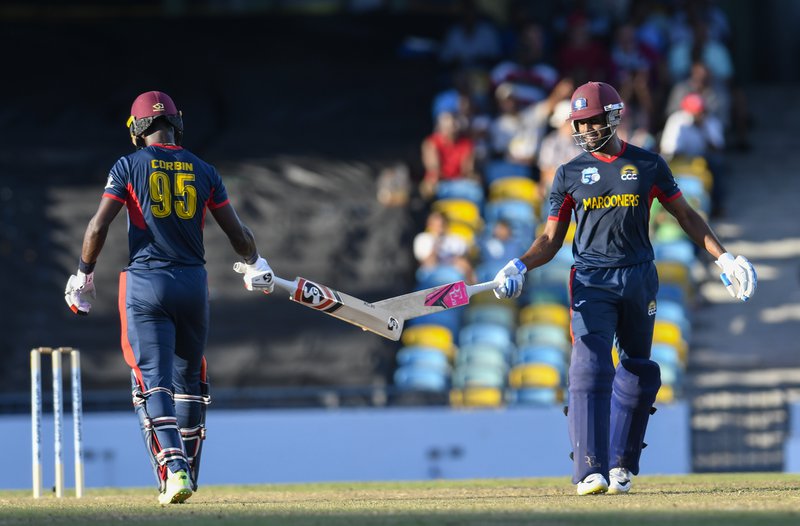 The victory gave the Marooners a maiden regional title in any format at the third time of asking, after making the Grand Final of the Super50 Cup five years earlier and the Final of the West Indies 4-Day Championship in 2011.

Kyle Corbin, the only survivor of those two campaigns and CCC captain at the time, played in Sunday's Final and made his presence felt with the bat, slamming the top-score of 72 off 53 balls including 12 fours and two sixes to earn the Player-of-the-Match award.

Professor Sir Hilary Beckles, the visionary behind the Marooners, led the list of well-wishers, as the side celebrated its achievement with an event at the Errol Barrow Centre for Creative Imagination at the UWI Cave Hill campus in Barbados.
“Our students have inspired the cricket world of the Caribbean and beyond, in both the execution of their victory and in the explicit display of high sporting values and principles,” said Sir Hilary, Vice- Chancellor of UWI.
“At the outset, I asked of them to recognize they will be playing for a purpose and cause much bigger than themselves or their university – the resurrection of West Indies cricket performance culture.
“They gave me an assurance of agreement and did not depart from their commitment. The evidence is now clear; they constitute the heartland of the West Indies cricket academy.”

CCC are effectively a continuation of the previous University of the West Indies team that played in the regional Super50 competition. 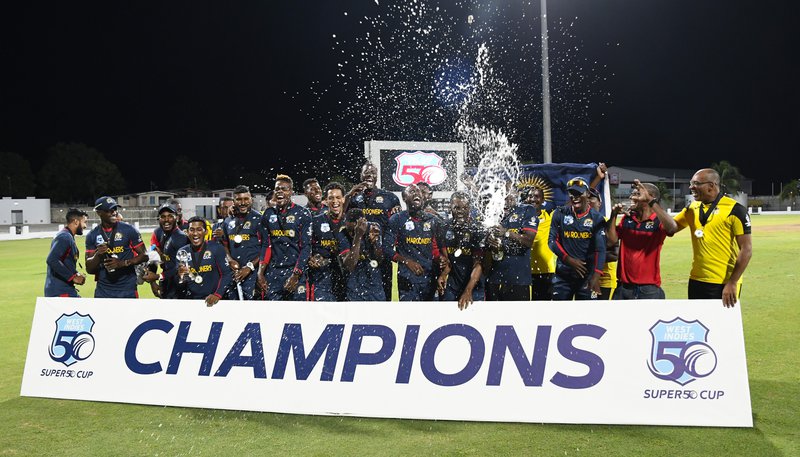 The team is the culmination of work by Sir Hilary to primarily give young, promising student athletes at UWI and its satellite tertiary institutions around the Caribbean an avenue to continue playing the game while pursuing their studies.

It was created ahead of the 2007-08 regional season, playing their first matches in the 2007 KFC Cup, as the Super50 Cup was entitled in October 2007, and followed up with the 2008 Carib Beer Cup, the West Indies 4-Day Championship, a few months later.

They became known as the Marooners, when the West Indies Cricket Board (now Cricket West Indies) transformed its senior domestic tournaments to franchise-styled competitions four years ago.

Among the mix are also players chosen after the traditional CWI member territories – Barbados, Guyana, Jamaica, Leeward Islands, Trinidad & Tobago and Windward Islands – have all picked their teams, making the Marooners’ achievement in the 2018-19 Super50 Cup all the more significant, as they ruthlessly took out the cream of the region’s cricket.

The journey was not without its challenges. They lost two of their first three matches against the Scorpions and Hurricanes by seven wickets and nine runs respectively – failing to defend their home turf of the Three Ws Oval.

The Marooners however, hit back powerfully to win four of their remaining five matches (the other match was a no-result), therefore topping Group “B” with 26 points.

They logged convincing wins against territorial rivals, the Pride, by seven wickets at Three Ws Oval and 125 runs at Kensington Oval which contributed significantly to the host team, led by Shamarh Brooks, being eliminated from the semi-finals.
In between, they crushed the Scorpions, dismissing them for just 82 in 26.2 overs, and formalised a six-wicket victory in 17.5 overs at Three Ws Oval.

Entering the second semi-final at Kensington Oval, the Marooners were labelled as under-dogs, facing a Red Force side, fielding as many as 10 players with international experience in one form or another. 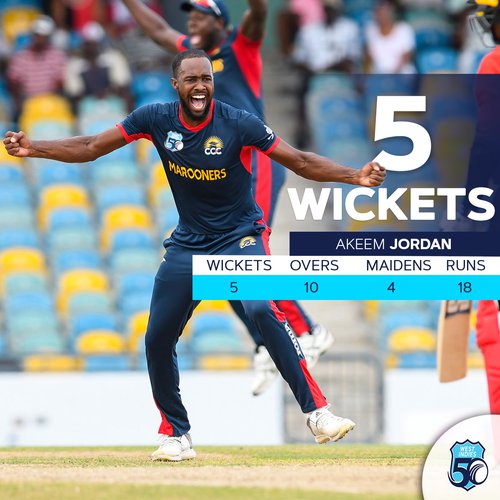 Little-known fast-medium bowler Akeem Jordan upstaged their powerful batting with a career-best spell of five wickets, firing out Red Force for 92 in 33 overs before Marooners reached their target in 16.2 overs to win by a comfortable six-wickets.

In the Final, there was no magical spell, but the Marooners bowled with purpose and restricted the Jaguars to 204 in 49.1 overs before Corbin ushered them to the title in 37.4 overs.
“This victory means a lot to the programme,” said coach Pedro Collins.

“CCC have been trying to win a title for a long time. There has been a lot of behind-the-scenes work we have put in and the way our players have trained their butts off was good to see.”

The former Barbados and West Indies left-arm fast bowler added: “A lot of people did not believe that we could accomplish this result, but it is great that we could work hard and show them that we could do it.

“We dedicate this win to Floyd. He has been the real brains behind this programme. He has been pushing it from day one, so it means a lot to the guys and I am happy for them.

“Kudos also to the captain. Carlos brought a lot to the dressing room. The players looked up to him, literally and figuratively.”

Brathwaite was key to the title success, after he was wooed by Reifer, the former Barbados and CCC batsman, and West Indies captain, and who left mid-tournament to become the WINDIES batting coach on the tour of India.

Brathwaite was named the best all-rounder of the tournament, scoring 212 runs at an average of 53, the best batting average for the Marooners, and took 13 wickets at 15.15 apiece with his medium-pace.
He was supported in the batting by T&T-born left-hander Kjorn Ottley, whose 306 runs was the leading aggregate for the side.

Ottley’s younger brother, Yannick, snared 17 wickets at 12.17 apiece to be the joint leading bowler in the tournament with Canada’s Romesh Eranga, and Jordan ended with 16 scalps at 14.62 each.
“This victory means a lot to me,” said Brathwaite. “A lot of people have been telling me over the last year that I needed to sacrifice some of the franchise (Twenty20) cricket and return to the first-class game.
“I spoke to Floyd about trying to get my batting back on track and the opportunity to come lead the Marooners, if possible.

“I spoke to Kyle and got his blessing, as he was the incumbent captain, and for such big decisions and sacrifices to be made and for it to culminate in a victory, and for us to go down in the history books, it's a special feeling.”
He added: “Our motto was that we wanted to be respected around the region. Floyd instilled in us that we were playing to win which was different to the past, where we just came looking to be competitive. When you are competitive and you get that close, it's not winning. You always have near misses.
“This year, we came to win and did a lot of soul-searching. . .but the message was clear – if we want to win, we needed to play a brand of cricket that was attacking, no fear and since then the message from the dressing room was always the same. This is a culmination of a lot of things and a lot of hard work.”

CCC have come a long way from their humble beginnings which saw them tie their very first ever regional game in the 2007-08 KFC Cup against Trinidad & Tobago (now Red Force), the most successful West Indies Super50 side.

This however, was followed by heavy defeats against Guyana (now Jaguars) and Windward Islands (now Volcanoes) in the remaining matches, but they improved the next season to clinch their first victory and ended with two wins out of four matches.

They finished their maiden 4-day season with one win from six matches, finishing bottom of the league, but they rose in their second season of this competition to win four out of 12 matches and finish on an equal number of points with territorial rivals, Barbados (now Pride).

By 2011, the Marooners reached the Final of the 4-Day Championship, after they posted victories against the Pride, Hurricanes, Volcanoes and Jaguars, but they were no match for a strong Scorpions team, who won rather easily.

Two years later, they lost the Grand Final of the Super50 Cup by nine wickets under the Duckworth/Lewis Method to Volcanoes at the same venue of this season’s heist.

The Marooners continued to play consistently, if not spectacularly in senior regional tournaments over the next two years until they were chopped from the first-class tournament, after it was professionalised by CWI.

Over the years, several players have passed through the programme with Brathwaite and current WINDIES Test and One-day International captain Jason Holder leading the way.

In their last 4-Day campaign, they finished fifth in the seven-team championship, above Hurricanes and Jaguars.
That year, the squad featured the likes of Chadwick Walton, Kesrick Williams, Raymon Reifer and Jomel Warrican, all of whom have also played international matches for WINDIES.