With every team in the Women’s World T20 having played at least one match, the tournament is starting to gather momentum. There have been some exceptional individual performances already with Deandra Dottin, Harmanpreet Kaur and Alyssa Healy three of those who have really caught the eye. Patrick Noone of CricViz looks at how they've had their success.

The Windies all-rounder began the tournament in spectacular style, taking five wickets for just five runs against Bangladesh. They were the best figures in ICC Women’s World T20 history and the third best in all Women’s T20I matches as Bangladesh collapsed to 46 all out.

Dottin’s average speed in the innings was 115.62kph, making her the second fastest bowler in the tournament behind New Zealand’s Lea Tahuhu. That was too quick for Bangladesh who were continually undone by her speed and accuracy, particularly when she pitched the ball up and aimed to hit the stumps – three of the four balls she bowled that would have gone onto to hit the stumps resulted in wickets for her, while the fourth of those ultimately ended in a wicket as Khadija Kul Tubra was run out. 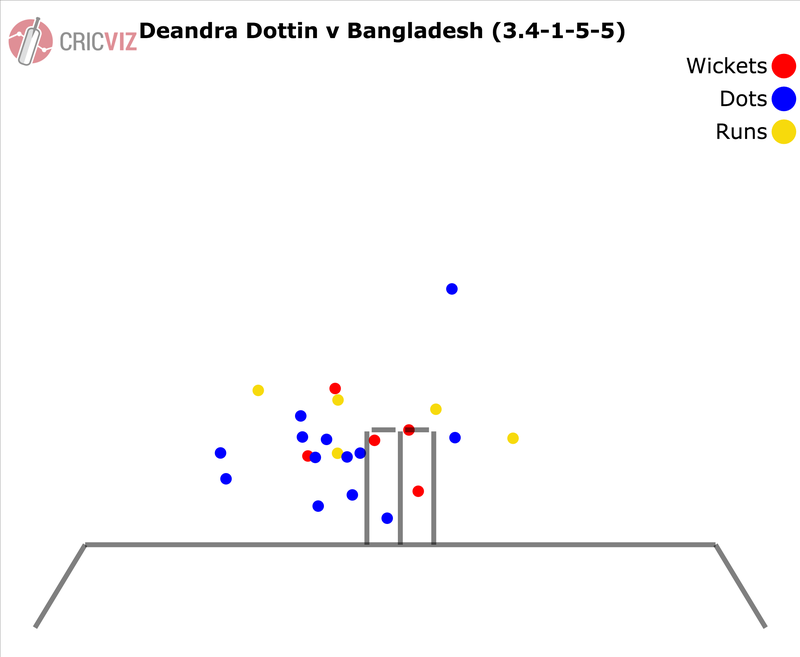 When she dragged her length back, Bangladesh were more comfortable; the only balls they scored runs off came from balls pitching between 8m and 11m from the stumps. However, Dottin still picked up two wickets from balls in that zone, emphasising that she was still a threat in that area, despite Bangladesh’s batters finding ways to score off those deliveries. 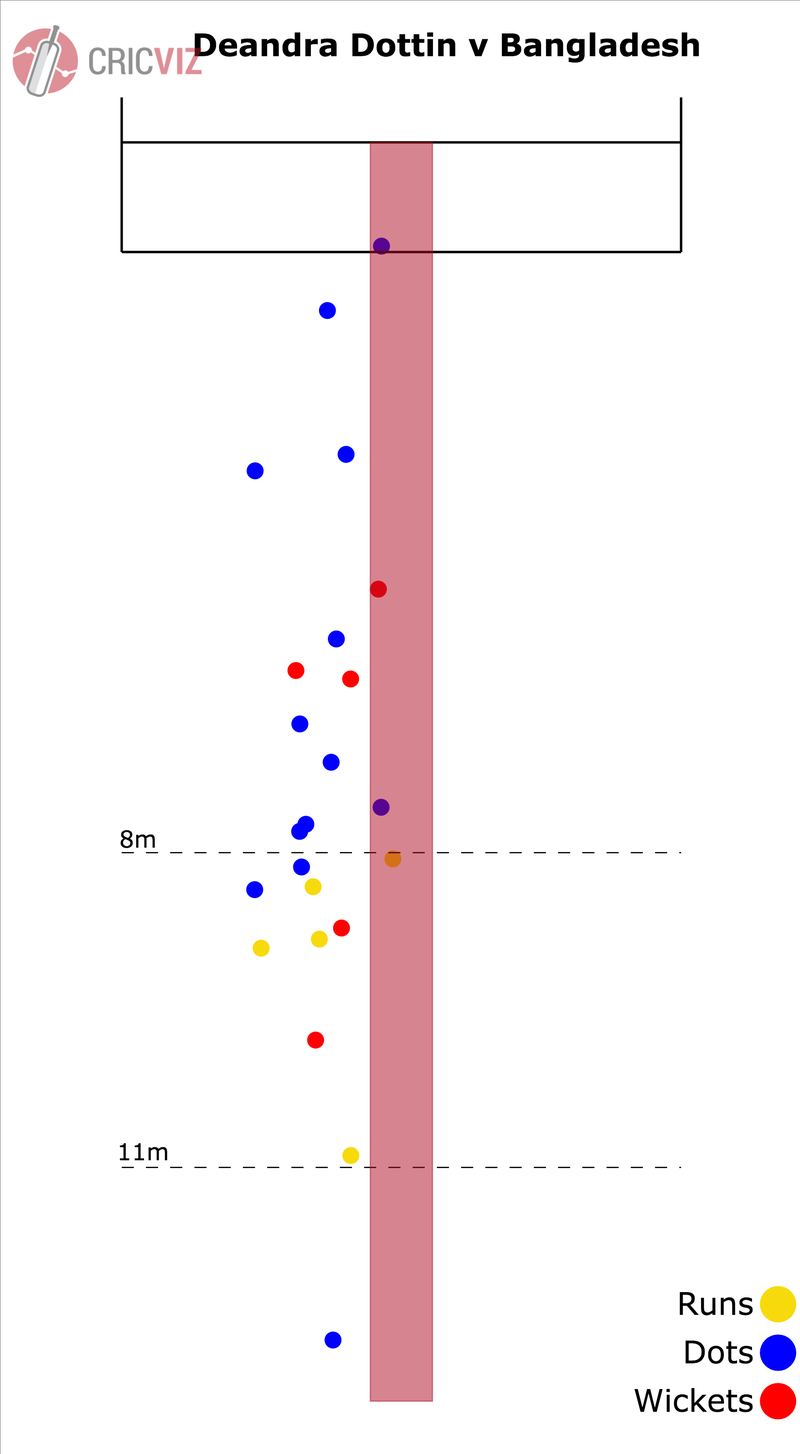 The hosts will no doubt have sterner tests ahead of them, but to win so emphatically with one of their key players standing up and performing to such a high level bodes well for them as the tournament progresses.

India’s star batter got the tournament up and running with a blistering century against New Zealand in the opening match. It was the first century in WT20Is by an Indian and featured eight sixes, the second most ever scored in a Women’s World T20 match.

Kaur was devastating against full and straight balls, scoring 48 of her runs in the ‘V’ between mid-off and mid-on. As the beehive shows, her sweet spot for boundary hitting was to balls on and around the top of her off-stump, where 50% of her runs came from just ten of the 51 balls she faced. 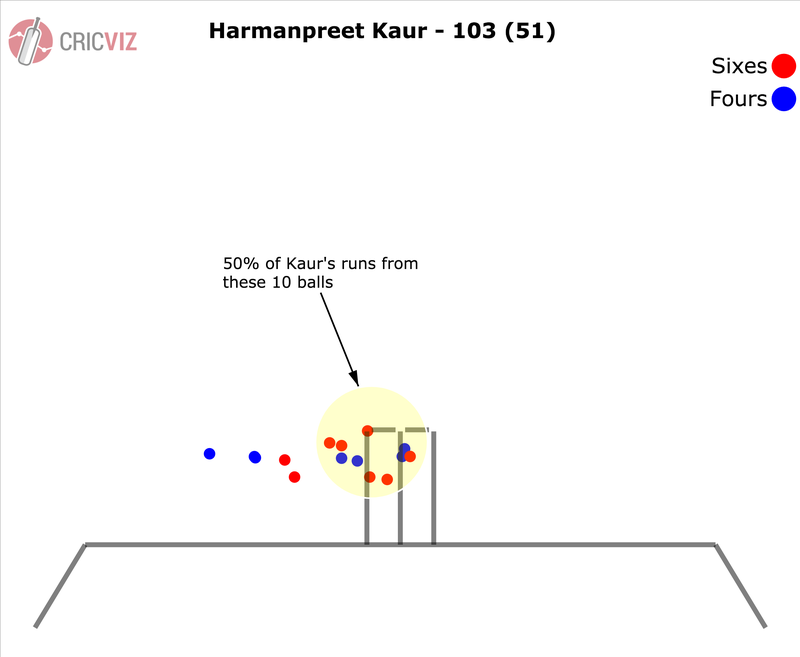 India are third favourites with the bookmakers to win the tournament, behind Australia and England. They find themselves in the more difficult half of the draw with both New Zealand and Australia alongside them in Group B. Thanks to Kaur’s scintillating innings, they have overcome one of the two big hurdles in the group already and if she can keep firing, India have a great chance of going all the way.

Australia’s wicket-keeper batsman became the second player in the tournament to reach the milestone of 100 runs after she struck a 31-ball 56* against Ireland in Guyana. She reached 50 off just 21 balls, making it the second fastest half-century in WT20I history, falling three balls short of the record set by Sophie Devine back in 2005.

Before then, she had already scored 48 off just 29 balls against Pakistan in her side’s opening match. The bulk of Healy’s runs in her two innings in this tournament have come between cover and mid-off. Eight of her 17 boundary fours have come in that quadrant as well as one of her two sixes. 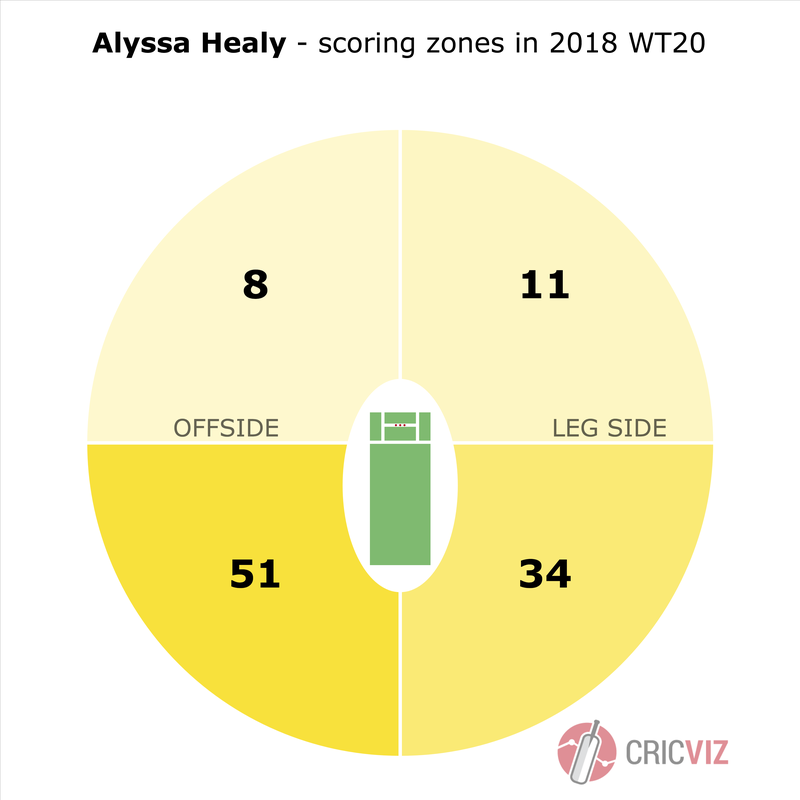 These performances so far in the tournament are merely Healy continuing her fine run of recent form. Her innings against Pakistan followed up her unbeaten 67 against the same opposition in Kuala Lumpur before the tournament began. In all, Healy has scored five fifties (and a 48) in her last seven innings in this format.

Healy’s talent has never been in doubt, but she is now adding the consistency to go alongside that. Only three openers (Suzie Bates, Mithali Raj and Smriti Mandhana) have scored more runs than Healy as an opener in WT20Is this year, but none have scored their runs as quickly as her 9.14 runs per over. Add in her exceptional glove work, which has already accounted for four dismissals in two matches this tournament, and Healy has to be thought of as one of the most valuable players in the women’s game.

Patrick Noone is an analyst at CricViz.