WINDIES BOWLERS CONTROL BANGLADESH ON DAY ONE OF SECOND TEST

DHAKA, Bangladesh– The WINDIES bowlers heeded the call from captain Kraigg Brathwaite and took charge of the opening day of the 2nd Test against Bangladesh at the Sher-E-Bangla National Cricket Stadium in Dhaka.

Shakib Al Hasan won the toss for Bangladesh and elected to bat first with a team that was packed with a minimum of five spinners. They got a solid start from their openers Soumya Sakrar and debutant Shadman Islam, before Roston Chase had Sarkar caught for 19. Shadman looked focus and without nerves playing in his first Test match, together with Mominul Haque, the pair looked set to take Bangladesh to a sizable first day total. However, veteran WINDIES pacer Kemar Roach broke the partnership when he had Mominul caught for 29, ensuring the WINDIES kept check on the batsmen. 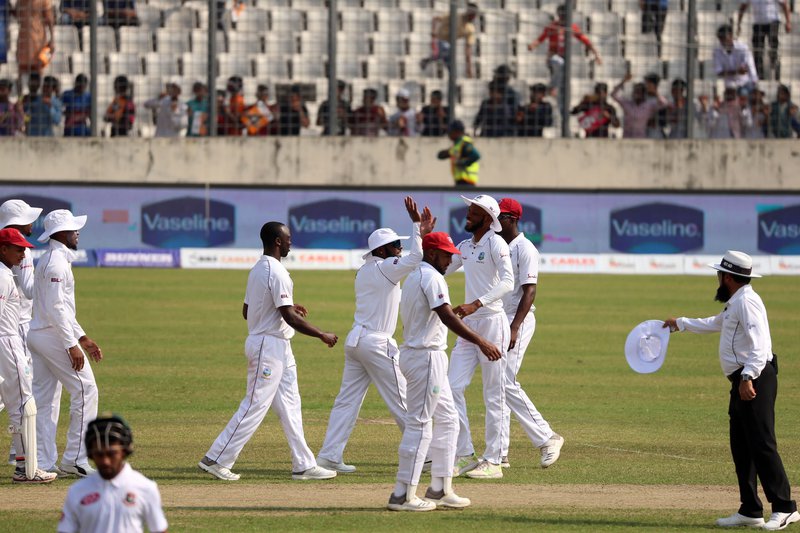 Mohammad Mithun and Shadman started a slow rebuild, adding to their total through singles and quick running between the wickets. The fielding by the WINDIES was commendable, as they were agile and accurate to support the tight bowling. Just as Shadman and Mithun were settling, Brathwaite reintroduced Devendra Bishoo and he struck almost immediately, bowling Mithun for 29. Two overs later, Bishoo struck again, removing Shadman who looked set to get his maiden Test century, trapping him LBW for 76.

This little slide swung the momentum back in the WINDIES favour as the teams went to tea. The ever dangerous Mushfiqur Rahim joined his captain Shakib Al Hasan at the crease. Bangladesh’s most experienced pair looked set to rebuild their team’s innings which was now tottering on 161/4. They posted 29 runs together before Shermon Lewis steamed in and knocked the bails off Mushfiqur’s stumps for 14. 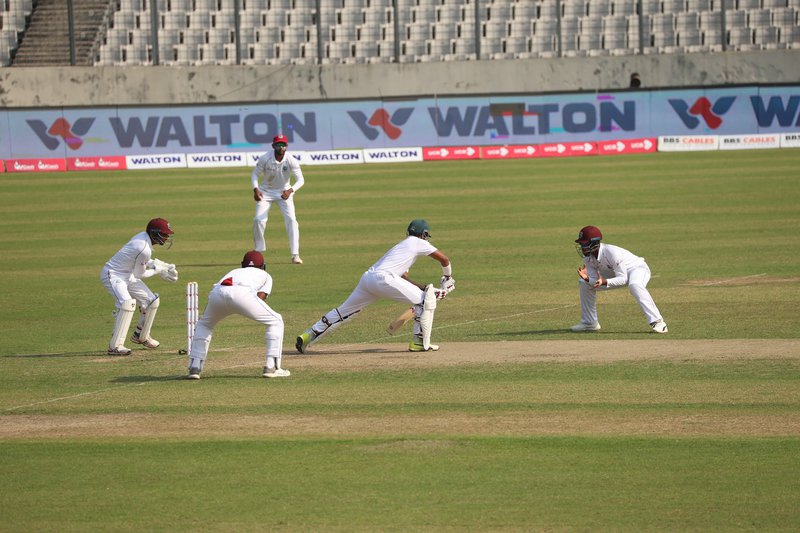 Mahmudullah joined Shakib in the middle and the pair took the home team to the close of play on day one to 259/5, with Shakib on 55 not out and Mahmudullah 31 not out. Bowling for the WINDIES Bishoo retuned the best figures with 2/69, while Shermon Lewis, Kemar Roach and Roston Chase all finished with one wicket each.

Speaking at the close of play, Bishoo said “We had a good first day with the 5 wickets falling… By the end of the day we focused on containing Shakib and Mahmudullah and will be looking to get the next 5 wickets early tomorrow morning when play resumes, without them adding a lot more runs.”