DHAKA, Bangladesh– The WINDIES suffered an innings and 184-run defeat to Bangladesh in the 2nd Test at the Sher-E-Bangla National Cricket Stadium in Dhaka. The WINDIES 111 & 213 all out, with Shimron Hetmyer top-scoring in both innings.

Resuming the day on 75/5, some 433 runs behind Bangladesh’s first innings total of 508 all out. Shimron Hetmyer and Shane Dowrich started the morning looking to salvage the WINDIES first innings but it was not to be as Hetmyer was the first to fall for 39 when he gave a soft caught and bowled dismissal to Mehidy. Dowrich was not far behind as Mehidy trapped him LBW for 37. The WINDIES last two batsmen were back in the dugout with the addition of 13 runs to the overnight score.

Mehidy Hasan finished with figures of 7/58, while Shakib Al Hasan had 3/27.

The rest of the WINDIES wickets capitulated quickly, all out for 111 and well short of the follow-on score. Batting a second time the WINDIES again started on the backfoot, as captain Kraigg Brathwaite was LBW to Shakib Al Hasan for 1. Kieran Powell’s wicket soon followed after, when he charged at Mehidy and was stumped for 4. Sunil Ambris provided no support for Shai Hope as he too fell for 4, LBW to Taijul Islam, Roston Chase continued the slide as he too became a second wicket for Taijul.

Hope and Hetmyer looked set to give the WINDIES a chance to get back into the match. The pair batted sensibly against the Bangladesh spin, with Hetmyer the attacker. They had a 56-run partnership before Hope got a top-edge which Shakib held on to firmly giving Mehidy a second wicket. Shane Dowrich was caught for 3. 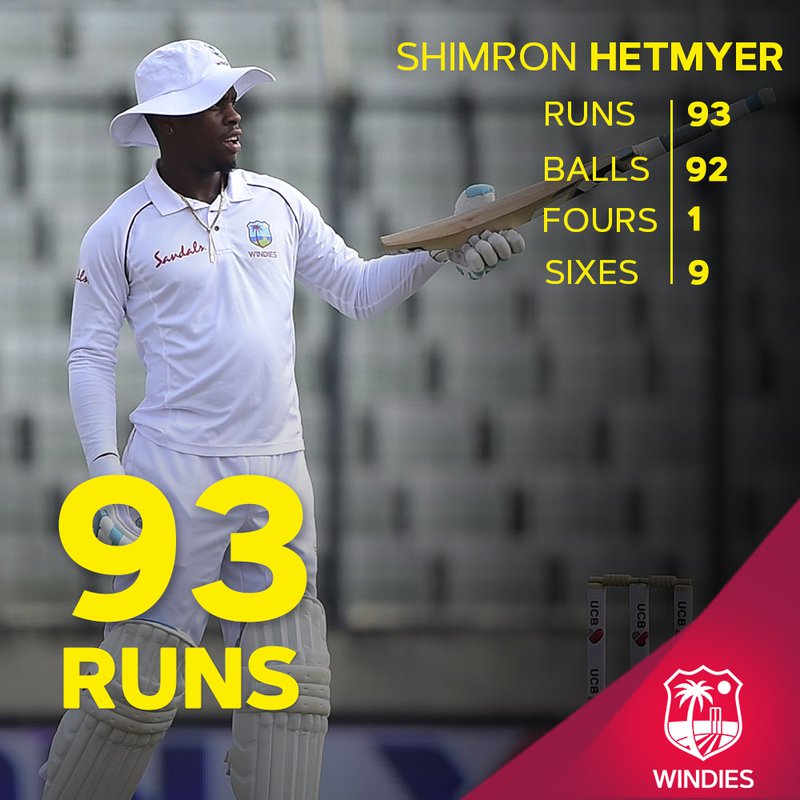 Hetmyer was joined by Devendra Bishoo, who allowed him to continue his fearless batting. Hetmyer struck Shakib for 3 sixes in a single over, giving the WINDIES further hope that with the tail-enders support, Hetmyer can take the team to the Bangladesh first innings score. Mehidy returned which signaled the fall of another WINDIES wicket as Bishoo was caught for 12. With another Test century in sight, Hetmyer going for one more big shot was caught in the deep for 93, off Mehidy. A knock that included 1-four and 9-sixes, tying him with Chris Gayle for most sixes in a Test innings by a West Indian.

Kemar Roach and Shermon Lewis were the only other batsmen to offer any resistance to the bowling. They added 42 runs for the last wicket when Lewis was out LBW for 20 off Taijul. Roach remained on 37 not out, which included 7-fours.

Mehidy Hasan was Player of the Match, while Shakib Al Hasan was Player of the Series. Speaking afterwards, WINDIES Captain Kraigg Brathwaite said, “I think it was a very disappointing series, the bowlers did well but the batters didn’t fulfill the requirements… Being three wickets down put us behind the eight ball every game and we were struggling because of that. Conditions also play a major factor, but we just didn’t make proper shot selection at the right times. As batsmen we have to raise our hands and take responsibility for not playing well.”