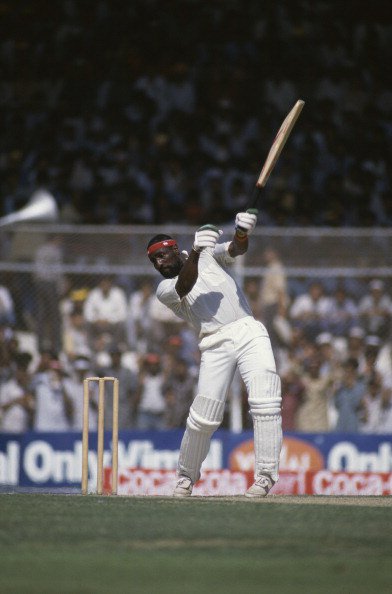 In all of my tours to Pakistan, I generally encountered flat and generally good batting wickets and it was no different in Karachi that day.

Looking back, although it doesn’t get spoken about a lot, it was a masterful innings by Sir Viv and he just had his way with the Sri Lanka bowlers who were still emerging as a team.

For shot making execution it was on par with the 189 versus England in 1984, but of course not anywhere near the same quality, given the standard of opposition and context of the respective games.

In those days, confidence was never an issue for the West Indies team going into battle, regardless of who was on the field.

Especially in 1987 with the history at the time, where we had gone to three consecutive finals and won two of them.

The World Cup was being played in the sub-continent for the first time. Undoubtedly the experience and history of success in the region that missing players due to injury and retirement such as Gordon Greenidge, Malcolm Marshall, Michael Holding and Joel Garner were missed somewhat. However we never complained about it.

It was my first World Cup and although we didn’t have those experienced players, I felt that, as an upcoming fast bowler in the team and with Patrick Patterson, who was the fastest bowler in the world at the time, coming off his exploits in the 1986 home series against England, plus Courtney Walsh who had been playing for a few years already, there were great attack leaders.

The 181 was a forgotten classic from the “Master Blaster,” even though an emerging Sri Lanka team was no match for him.

No doubt the one major similarity to Sir Viv’s 181 versus Sri Lanka to the 189 against England was the power striking. During the England game, I recall him coming into the dressing room focused, just saying he needed someone to stay with him. He didn’t even have lunch.

I didn’t play in the 1984 game, but remember going to the sponsors & supporters box at the interval and telling them there is a guy there in Sir Viv, focused and about to do something special, despite West Indies being in some early trouble and so it proved.

Against Sri Lanka in 1987, it was a much more relaxed game and atmosphere.

By the time I came out to bat with him, he had already got his century following a big partnership with Desmond Haynes.

I remember Ashanta De Mel and the other Sri Lanka bowlers running in to Sir Viv and as he hit them for six, he was almost apologetic.

It was as if he was saying to them, no worries - this is a learning process for you and one day you will be better.

Obviously in the last few years, despite it being a great score, more teams in modern 50 overs cricket are scoring 350-plus totals.

I don’t think the public reacted strongly at the time to us scoring 360 as a great achievement, because Sri Lanka were still seen as minnows.

But it was certainly ahead of its time for 1987.

Take a look on scorecard here.