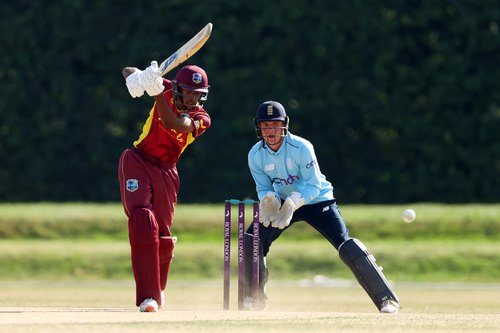 Meet Ackeem Auguste, the young batsman chosen to lead West Indies Rising Stars U19s in the upcoming ICC U19 Men’s Cricket World Cup. It’s the first time the tournament will be hosted by Cricket West Indies and played in the Caribbean. The stylish left-handed batsman will have the honour of leading the home team onto the field of play. This will happen on Friday against Australia U19s at Guyana National Stadium. First ball is 9am (8am Jamaica) and live ball-by-ball action will be broadcast on ESPN Caribbean.

“This is an amazing moment for me and a true honor to captain the West Indies in a World Cup tournament. It is a privilege to play for the West Indies and I am really happy to lead and give my all. We are confident as we head into the first match. We are well prepared, and we are eager to get going in the opening match,” Auguste said. “The pitches have been good since we have arrived here in Guyana and we expect to perform well. This is the moment we all wanted. This is what we worked so hard for, to be able to represent the people of the West Indies. The time is now.”

Auguste added: “We had a good programme in the build-up. I think the enthusiasm from the guys has been good, I think we have gelled well as a unit and looking forward we are very confident as a team. I think we are a very talented bunch, everybody in this team can pull their weight. We are a team full of quality batters and bowlers and a good fielding unit too. Overall, we are very confident. As a team we are always looking to improve.”

Auguste gave some details into a part of the team’s preparation prgramme, which has been ongoing for a year under the guidance of Head Coach Floyd Reifer. They had several sessions including camps at the Coolidge Cricket Ground in Antigua and a tour to England. They also had a series against South Africa in St Vincent. They also had a special speech from the great Sir Clive Lloyd, the heroic who led the West Indies to victory in the Cricket World Cups in 1975 and 1979.

“One of the most inspiring moments was our talk with Sir Clive Lloyd. He told us ‘the only time success comes before hardwork is in the dictionary’. It was an honor to speak to him and we tried to learn as much as we could from the time, we listened to what he had to say. Knowing what he did for West Indies cricket and what he produced on the field and the leadership he demonstrated off the field, I made sure that I took everything on board. What they were fighting for. We asked a lot of question and one of his responded was that they played with a lot of pride, and they wanted to play their hearts out and that brought a lot of success to West Indies cricket and filled the fans with pride and joy.”

Auguste is a graduate of the St Mary’s College in St Lucia, and now enrolled at the Cave Hill campus of the University of the West Indies in Barbados, where he is studying Business Management. He has experience at a higher level having represented the St Lucia national team in the Windward Islands tournament and trained with the Windward Islands Volcanoes franchise squad in Grenada. He is a student of the game and has focused on the rich history of West Indies cricket. As a left-hander he sees the great Brian Lara as the perfect batsman to emulate.

“I like Brian Lara as my favourite batsman. His record speaks for itself. He was a left-hander like myself and the way he was able to manipulate the field and the hit the gaps and take on the bowlers is what I love to see. One of my favorites was his 277 at the Sydney Cricket Ground. I like watching it on YouTube and the other highlights of his great performances. One of the really good things in our camp is also the stories from Sir Curtly Ambrose and Shiv Chanderpaul. This is great for us and we listen and learn to understand the history and significance of West Indies cricket,” Auguste said.

“I try to watch a lot of old matches and the documentary ‘Fire in Babylon’, I watched that as well and gained a lot of information and knowledge from that. I see myself as a typical young man… jovial, enthusiastic, motivated and happy going about my business with a great desire and passion for the game and doing great things for the people of the West Indies.”

West Indies have been drawn in Group D alongside Australia, Sri Lanka and Scotland. After Friday’s match in Guyana they will trvel to St Kitts where they will face Scotland on January 17 and Sri Lanka ion January 21.