Scorpions And Red Force In Quest For Glory 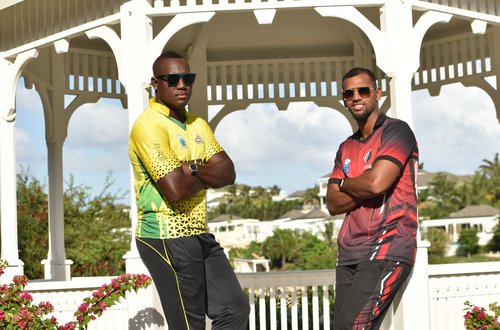 Following two engrossing semi-finals of the CG United Super 50, in which all four sides scored totals of more than 300 runs, we are now down to the final, taking place Saturday 19th November, in which defending champions Trinidad and Tobago Red Force will battle the Jamaica Scorpions for honour of lifting the Sir Clive Lloyd Trophy Super50 trophy.

The match will be played at the picturesque Sir Vivian Richards Stadium with first ball at 2pm local time (1 noon Jamaica). Fans can catch the LIVE ball-by-ball action on ESPN Caribbean.

Nicholas Pooran brings up his century with a boundary!#CGUnitedSuper50 #bringit pic.twitter.com/tt60iNeWx8

To add to the intrigue, the contest will see West Indies white ball captain Nicholas Pooran against his deputy Rovman Powell, with both men having captained their respective regional side to the final with explosive innings in the semi-finals. Pooran’s 111 runs from 82 balls proved to be decisive in the semi-final against Barbados Pride, and he is currently the leading scorer in the tournament, with 334 runs.

Rovman Powell’s innings of 105* batting at number five against last year’s finalists Guyana Harpy Eagles was one of the most memorable innings in the tournament and he will be hoping to replicate that in the final. Crucial to the Scorpions will be the runs of opener and fellow West Indies international, Brandon King, who composed a fantastic innings of 64 runs in that semi-final to build a foundation for the Scorpions superb chase.

For defending champions Trinidad and Tobago Red Force, after a closely contested semi-final victory over Barbados Pride, they will be wary of the threat that the Scorpions pose. The form of Amir Jangoo in the semi-final will have pleased captain Pooran, who will also be hoping his senior batter Jason Mohammed can score big after a lacklustre tournament so far. It will be interesting to see if the same XI that featured in the semi-finals play, or if they bring in all-rounder Jyd Goolie to reinforce their batting line-up.

Shannon Gabriel, the leading wicket taker so far, was clinical in the semi-finals, taking four wickets, and will certainly be the key man for the side leading the bowling attack. As always, the experienced spin duo of Sunil Narine and Akeal Hosein will be expected to shine on the big stage.

Jamaica's Captain taking the match into his own hands! #CGUnitedSuper50 #BringIt

For Jamaica, they will be hoping for a more disciplined bowling performance, with Sheldon Cottrell yet to bowl his full allocation of ten overs so far in the tournament, there will be more pressure on Odean Smith to take wickets, which he did in the semi-finals, with five. Dennis Bulli, whose deceptive spin had been so critical to the side’s progression in the group stages, struggled in the semi-finals, but he could regain form in the final.

With both sides having won high-scoring semi-finals, the final is evenly poised, Trinidad and Tobago perhaps have the slight advantage due to their recent history of winning the competition. Jamaica Scorpions last won in 2011, nobody in the squad has ever lifted the trophy, and that will be all the motivation for them to win in the final. Regardless of the result, this promises to be a contest for the ages.