Red Force rebound to get vital win over Volcanoes 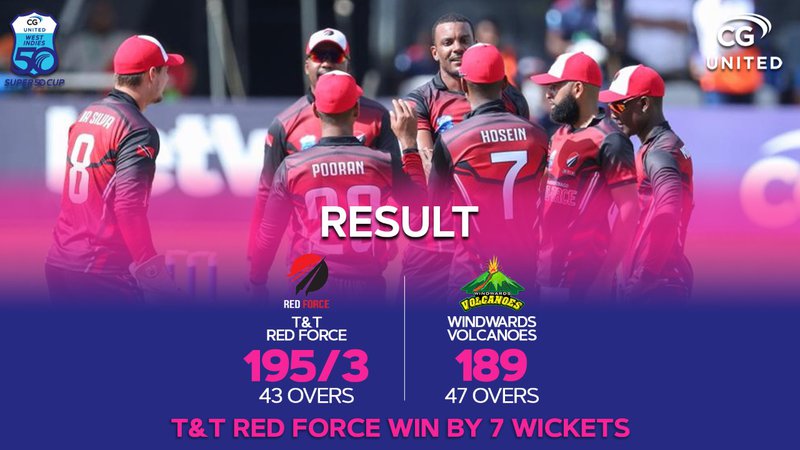 Red Force rebound to get vital win over Volcanoes

Defending champions Trinidad and Tobago Red Force bounced back from defeat with a dominant seven-wicket victory over Windward Islands Volcanoes. Chasing only 190 at Queen’s Park Oval on Saturday, they made light work of the target, overhauling it in 43 overs as Joshua Da Silva top-scored with 66.

Captain Nicholas Pooran (36 not out), opener Kjorn Ottley (36) and left-hander Darren Bravo (27 not out) all featured in vital to see Red Force to their second win, following their setback to Guyana Harpy Eagles earlier in the week.

Choosing to bat first in the Zone A encounter, the previously unbeaten Volcanoes made 189 all out off 47 overs – Kavem Hodge (39), Tevyn Walcott (36) and Preston McSween (22) the only players to reach 20.

Hodge faced 71 balls and struck four fours as he tried to stabilise the innings in two partnerships – adding 35 for the third wicket with Sunil Ambris (13) and 34 for the fifth wicket with Justin Greaves (19) – but Volcanoes still found themselves in a slide on 143-8 in the 38th. McSween then belted three fours in a run-a-ball knock to lift the lower-order.

Cariah did the business today with the ball🙌🏽

Da Silva found his touch as he struck half-dozen fours and a six off 88 balls in posting 69 for the first wicket with Ottley, 29 for the second with Jason Mohammed (20) and a further 43 for the third with Bravo.

He eventually departed at the end of the 33rd over, skying a catch to cover point, but Pooran saw Red Force home in an unbroken 54-run, fourth wicket stand with Bravo, as he hit a four and three sixes off just 31 balls.