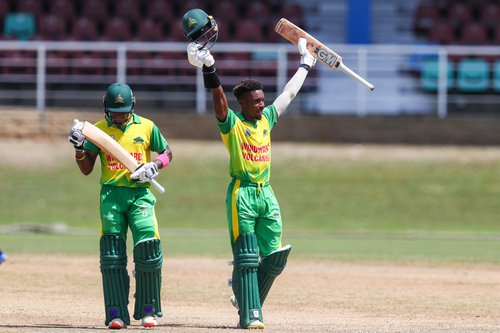 When Alick Athanaze ended the 2018 ICC Under 19 World Cup as the leading run scorer, many in the cricket world took note of the young talent from Dominica.

The ICC labelled Athanaze the rising star of the West Indies side and posited the potential for him to be the first Dominican to represent the senior Men’s side since Shane Shillingford in 2012.

If the opening round of the CG United Super 50 is anything to go by, then it seems that faith has not been misplaced.

Two stand-out hundreds against the Guyana Harpy Eagles and Combined Campuses and Colleges have not only propelled his Windward Islands side to the top of Zone A but the contrasting nature of the knocks have turned many a head.

Cautious and circumspect batting in the early stages of his innings versus Guyana, led to an almost run-a-ball 133 that laid the foundation for an impressive victory.

It is a fact not lost on Athanaze; speaking exclusively to the Caribbean Cricket Podcast, he said,

“If you look at the two innings they were completely different. Against Guyana I started slowly and was helped massively by Johnson Charles. He was seeing it well and he gave me the time to assess conditions and get into my work”.

His slight frame may not reflect the global notion of what a West Indian player is, but Athanaze is comfortable with playing to his strengths. He continued,

“I know I can’t muscle my way out of situations. I have to be smart and play to my strengths, that means batting deep and recognising my boundary and single options”.

What Athanaze is reaping is the growing maturity in his game and a true understanding of who he is as a player.

Having tasted West Indies A honours earlier this year vs Bangladesh A, Athanaze is clearly a player on the radar of selectors and he would have done himself no harm with his start to this year’s CG United Super 50.

However for Athanaze, whilst a first senior cap for the West Indies is on his ultimate radar, he is in no hurry, content to instead focus on taking his career one day and one game at the time.

Should that culminate with him being the top run scorer in the 2022 CG United Super 50, then that would merely be the next stage of the process that first turned heads in 2018.