Wickham stars with runs and wickets as Academy stun Jamaica 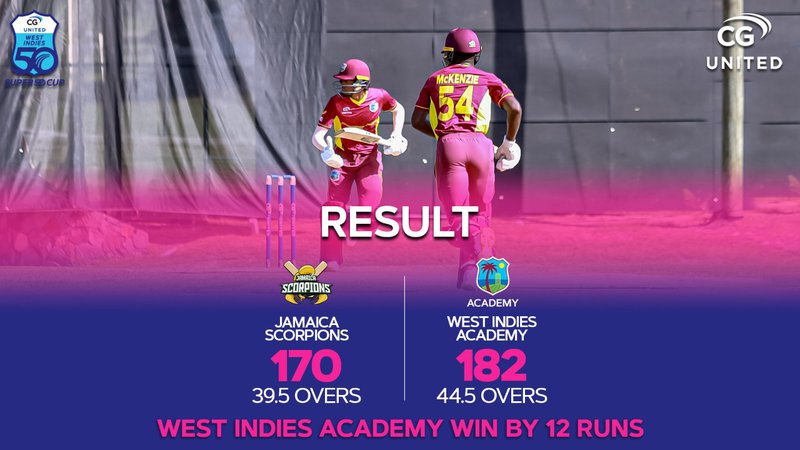 Wickham stars with runs and wickets as Academy stun Jamaica

West Indies Academy pulled off a remarkable victory over Jamaica Scorpions by 12 runs in a low-scoring contest on Saturday at the Sir Vivian Richards Stadium. The result has blown Zone B of the CG United Super50 Cup wide open.

Keagan Simmons dived to his left at short mid-wicket to account for the last wicket of Jeavor Royal (3) off spinner Kevin Wickham, as Scorpions were bowled out for 170 in the 40th over in pursuit of a modest 183 for victory.

Simmons holds on to give WI Academy a thrilling win for the #MastercardPricelessMoment of the match!🔥 #CGUnitedSuper50 #BringIt pic.twitter.com/ryH30kkGfQ

Scorpions looked in control at 124-3 in the 25th over thanks to captain Rovman Powell (42), Brandon King (28) and Andre McCarthy (28). However, left-arm spinner Ashmead Nedd (3-33) and Wickham (2-33) ran through the lower order to ensure the last seven wickets crashed for just 46 runs. Fast bowler Joshua James (3-19) had earlier rocked the innings up front with an outstanding spell.

West Indies Academy opened with a narrow defeat to Leeward Islands Hurricanes last weekend and followed up with a six-wicket loss to Barbados Pride and now Saturday’s win will lift them to third place on four points above Pride on net run rate.

“It was really good fight today. I was really happy with how the boys really stepped up and it was amazing there at the end,” said captain Nyeem Young on the post-match broadcast on ESPN.

Sent in to bat, the Academy side were bowled out for 182 in the 45th over, with Wickham top-scoring with a breezy 46 from 55 balls and Kevlon Anderson (33) and opener Leonardo Julien (32) chipping in.

They were struggling at 62-3 in the 19th over after off-spinner Jamie Merchant (2-33) struck twice but Wickham and Anderson combined in a 75-run, fourth wicket stand to patch up the innings.

Wickham struck three fours and a six to force the pace while Anderson played the anchor role with a single four in his 62-ball knock.