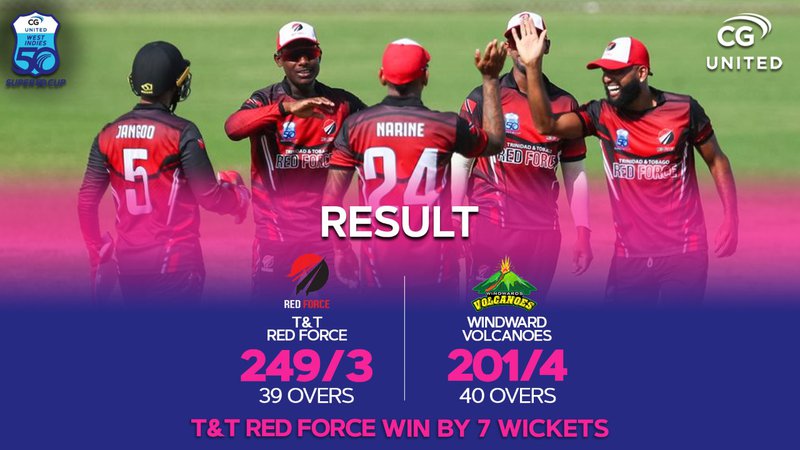 Captain Nicholas Pooran guided Trinidad and Tobago Red Force into the semi-finals of the CG United Super50 Cup with a calm victory over Windward Islands Volcanoes. With the reigning champions in pursuit of a revised 249 at Brian Lara Stadium after a near three-hour rain break ended the Volcanoes innings after 40 overs at 201-4, Pooran ended on 99 not out as his side won by seven wickets under Duckworth-Lewis-Stern Method with an over to spare.

Pooran started the 39th over on 97 and punched a single to deep cover off the first ball from Shadrack Descarte. His partner Darren Bravo, who finished unbeaten on 67, patted down the next two balls before pulling the fourth delivery to the square leg boundary.

The CG United Player of the match!💪🏽 Nicholas Pooran brings it home for the Red Force with his 99* runs from. 71 balls!💥#CGUnitedSuper50 #BringIt pic.twitter.com/OfbrsXYpBJ

A sharp single of the fifth delivery left Red Force with a single run for victory but also left Pooran needing a boundary to reach his hundred. However, he could only sky the final ball of the over behind the wicketkeeper for a single to hit the winning run. He ended with 11 fours and two sixes off 71 balls while Bravo gathered nine fours in a 63-ball innings, the pair putting on 165 in an unbroken fourth wicket stand.

Red Force storm into the semis with a
7️⃣-wicket victory over the Volcanoes (DLS).

Sunil Ambris had earlier suffered frustration of his own when the weather intervened with him in sight of triple figures on 90 not out. He struck eight fours and a two sixes off 100 balls, pulling Volcanoes out of trouble at 36-4 in the seventh over, in a 165-run, unbroken fifth wicket partnership with Andre Fletcher whose unbeaten 68 came from 103 balls and three fours and a six.