Looking for a quick recap of the high moments of today's match? Check out the Suzuki powered highlights below!

Interested in more action? Check out the extended version below.

GROS-ISLET, St. Lucia – Reigning World Twenty20 champions WINDIES failed to build on a combative, career-best 58 from Nicholas Pooran and England drew first blood in the Sandals Twenty20 International Series with a four-wicket victory in the first match on Tuesday here.

There were no pyrotechnics this time from Chris Gayle, the World-acclaimed Universe Boss, but fellow left-hander Pooran belted three fours and four sixes from 37 balls to be the bright spark in the WINDIES total of 160 for eight off their allocation of 20 overs, after they were put in to bat at the Daren Sammy Cricket Ground. 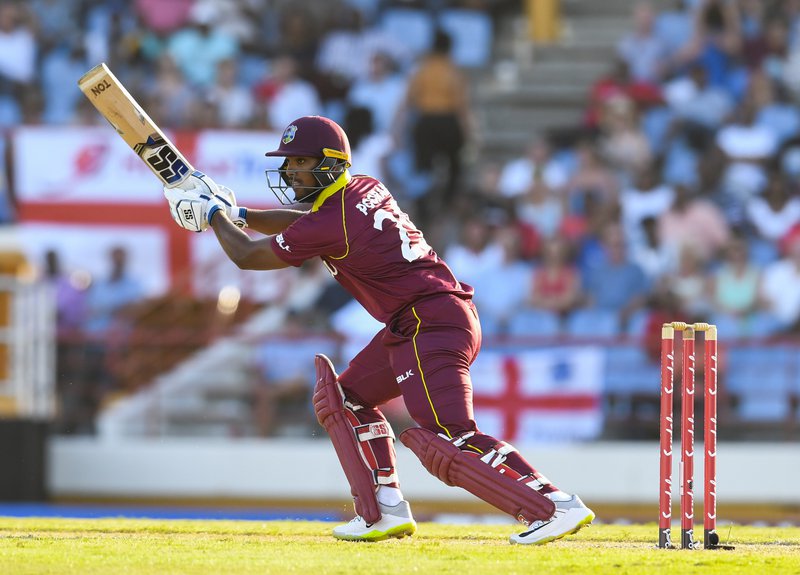 Left-arm fast bowler Sheldon Cottrell grabbed 3-29 from 3.5 overs to give WINDIES hope, but their bowlers failed to find the right formula and a few chances went abegging, as Jonny Bairstow stroked an entertaining 68 from 40 balls that included nine fours and two sixes to lead England’s successful pursuit with seven balls remaining under the lights.

The result meant that the WINDIES trail 0-1 in the three-match series which concludes with a pair of games this coming Friday and Sunday at Warner Park in the St. Kitts capital of Basseterre.

Cottrell bowled opener Alex Hales for 11, aiming a lofted drive to the last ball of the first over, and had an lbw verdict to remove Joe Root for a second-ball duck to a well-pitched delivery confirmed, after the batsmen reviewed umpire Nigel Duguid’s decision, which showed the ball would have clipped the leg bail, leaving England 32 for two.

But a few wayward overs from the WINDIES and a couple dropped chances to Bairstown eased the pressure on the England batsmen.

Wicketkeeper Shai Hope got his fingertips to an edge from Bairstow, on 34, off Brathwaite in the seventh over and Cottrell shelled a skier from the same batsman, on 52, off Ashley Nurse’s off-spin running in from long-off in the 10th over.

In between, Carlos Brathwaite continued his revival, when he had England captain Eoin Morgan caught at mid-wicket for eight from a miscued pull at a short, rising delivery in the ninth over before Nurse had Bairstow caught at deep mid-wicket in the 12th over with the visitors needing 58 from 51 balls. 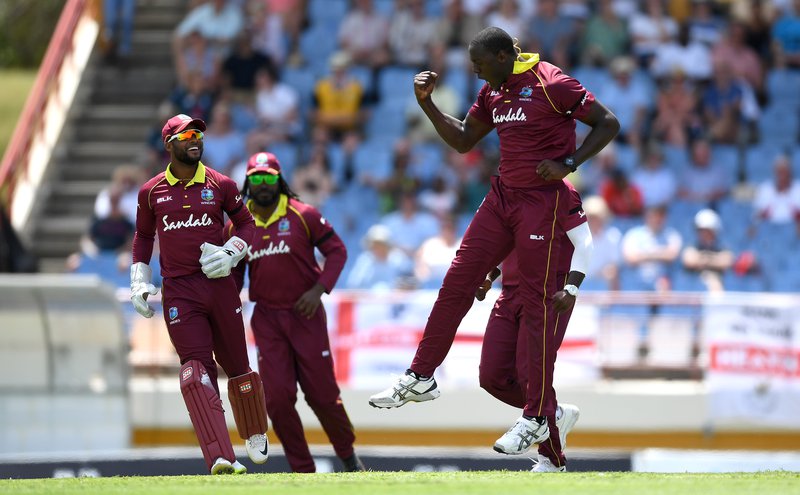 WINDIES captain Jason Holder had Joe Denly caught at deep mid-wicket for 30 in the 18th over following a 50-run stand for the fifth wicket with Sam Billings with England needing 15 from 14 balls.

Holder could have had a second wicket from the very next delivery had Oshane Thomas held a spiralling chance at deep fine leg from Billings’ top-edged hook, but Cottrell returned to bowl the penultimate over and bowled the England batsman for 18 to provide bit of late drama.

Cottrell’s fifth ball of the over however, was deposited to the long-on boundary, as David Willey and Tom Curran crossed to formalise the result. 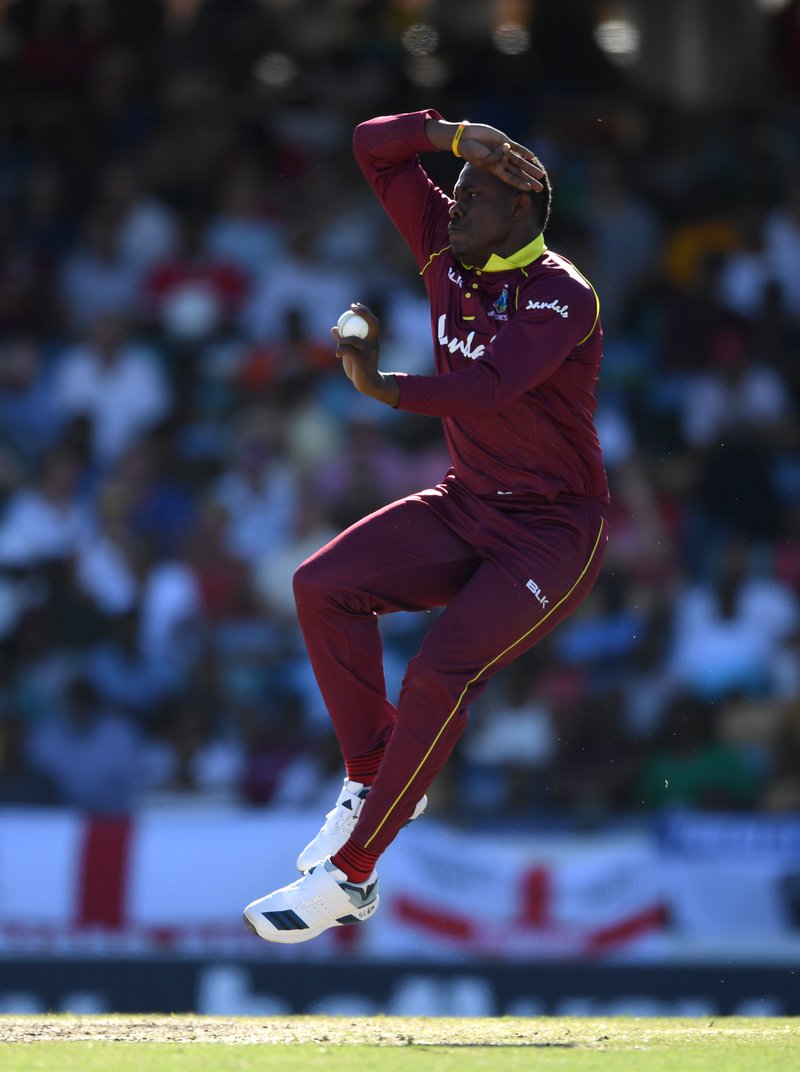 Earlier, Gayle became the leading six-hitter in T20Is, when he upper cut left-arm fast-medium bowler David Willey for the first of his two sixes, carrying past past New Zealand’s Martin Guptill (103).

He however, was one of the scalps that England claimed in the Power Play, as the WINDIES sunk to 37 for three.

Shai Hope was fortunate, on four, when Adil Rashid muffed a skier at deep backward point off Willey from an extravagant drive at the third delivery of the match, but he was caught at mid-wicket off Curran for five in the second over from a leading edge.

Gayle followed in the fourth over, when he was caught at short third man off Chris Jordan for 15, slicing a delivery of full length.

Hetmyer completed the triumvirate of early scalps for England, when he was caught at mid-on for 14 off the final ball of the fifth over from Curran from a miscued drive at a full toss.

Bravo came to the crease and with Pooran repaired the early damage with array of entertaining strokes in between some effective scoring either side of the wicket.

His most memorable strokes were a six over wide long-on off Liam Plunkett which disappeared over the Johnson Charles Stand in the 10th over in the evening twilight and a switch-hit over mid-wicket off part-time leg-spinner Joe Denly into the same stand in the 17th over.

Pooran reached his 50 from 32 balls, when he drove Denly for a single to deep mid-on off the last delivery of the 17th over before Curran bowled him with 13 balls remaining.

In between, Bravo was acrobatically caught and bowled by Jordan for 28 in the 14th over, when the bowler dived across the pitch to his right to intercept a looping leading edge after he befuddled the WINDIES left-hander with a slower delivery.

Carlos Brathwaite, whose four successive sixes off ben Stokes in the Final of World T20 against the English three years ago in Mumbai gave WINDIES their second title in this format, offered no such exploits and was caught behind for a six-ball duck off leg-spinner Adil Rashid in the 15th over, essaying a sweep.

And, Fabian Allen was caught at long-off for eight off Denly in the 17th over from a lofted drive to leave the WINDIES 127 for six.

After Pooran fell, WINDIES captain Jason Holder came to the crease and added 23 from the final 13 balls with Ashley Nurse before he was caught inside the long-off boundary for seven off the last ball of the final over, driving a Curran full toss.

There's so much to do and see while in sunny St. Lucia, just let her inspire you.