Keshav Maharaj took hat-trick as he bowled South Africa to victory over West Indies in the second Betway Test, to take a 2-0 series win on Monday at the Daren Sammy Cricket Ground. 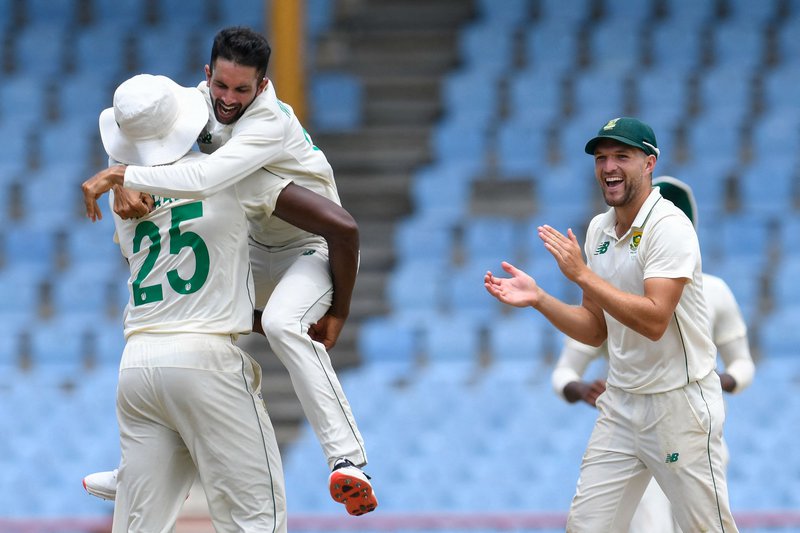 Starting the day at 15-0 in pursuit of 324 for victory, West Indies were in the game at 107-3 at one stage after lunch. Then left-arm spinner Maharaj claimed a remarkable hattrick as he ended with 5-36 off 17.3 overs. He became just the second South African to perform the feat in Test history. Left-hander Kieran Powell played well to topscore with 51 – which occupied 2 ½ hours of defiance and came off 116 balls with nine boundaries.

He fell when he tried to launch Maharaj into the on-side but was caught by Anrich Nortje on the midwicket boundary. Next ball, the world’s top-ranked Test all-rounder Jason Holder was caught by short-leg Keegan Petersen from a sharp inside edge. This was followed by Wiaan Mulder who took an excellent diving catch at leg-slip off Joshua Da Silva to complete the hat-trick.

West Indies lost captain Kraigg Brathwaite early as he edged Kagiso Rabada (3-44) to his opposing skipper Dean Elgar at first slip. Rabada then accounted for Shai Hope and had Kyle Mayers (34) to end with five wickets in the match which helped him secure the Player-of-the-Match award.

Mayers played well alongside Powell as they added 64 for the third wicket. After they stand was broken Jermaine Blackwood (25) and Kemar Roach (27) offered some resistance.

The teams will now travel to Grenada for the five-match T20 International series, starting on Saturday at the National Stadium.