The Home of West Indies Cricket
News
/
CricViz Analysis: Which Windies Bowlers will be at the T20 World Cup?

CricViz Analysis: Which Windies Bowlers will be at the T20 World Cup?

With the T20 World Cup in Australia just 12 months away, cricket analysis specialists CricViz have considered the cases for all the Caribbean players in contention for the squad. In the final piece of a three part series, they take a look at the bowlers who will have their eyes on selection.

Thomas is an extremely imposing presence, a muscular giant out of Jamaica who has made headlines around the world for his rapid fast bowling. In the last 12 months, his average speed in international cricket is 139kph - no West Indies bowler has been quicker. That extra speed does make him a very attacking option, a career strike rate of 15.7 testament to his ability to unsettle batsmen in this format. However, his economy rate (9.14rpo) and his true economy rate (+1.2rpo, meaning he's 1.2 runs-per-over more expensive than other bowlers in the periods of the innings when he bowls) make him a very difficult bowler to pick. Unless the selectors want someone capable of bowling heat in Australia, Thomas is unlikely to make the grade. 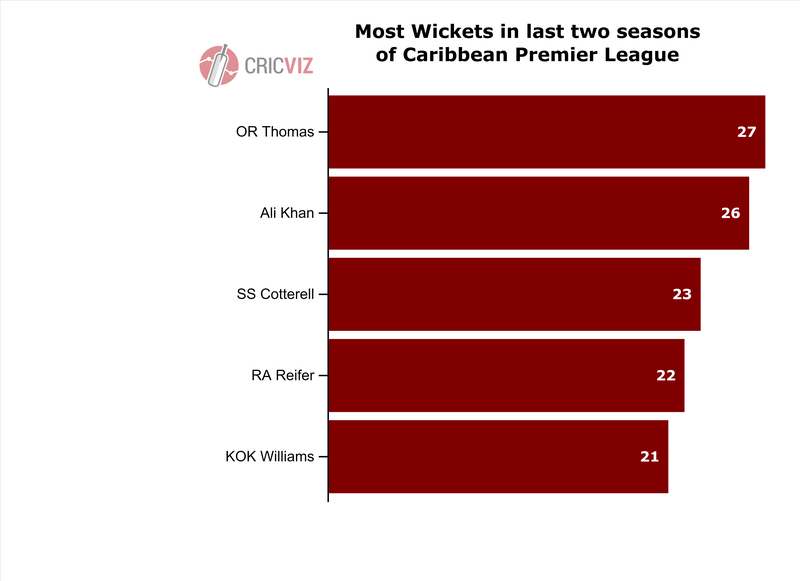 With his distinctive salute-celebration, Cottrell has swiftly become something of a cult-hero around the cricketing world - but he backs up his style with some substance. The Jamaican left-armer has a strike rate of just under 17 in the Powerplay, since the last T20 global event, and only Alzarri Josesph can better that record. Swinging the new ball, and offering the change in angle that comes from being left-handed, Cottrell covers several bases, as well as coming with the extra international experience that a member of the ODI side brings. 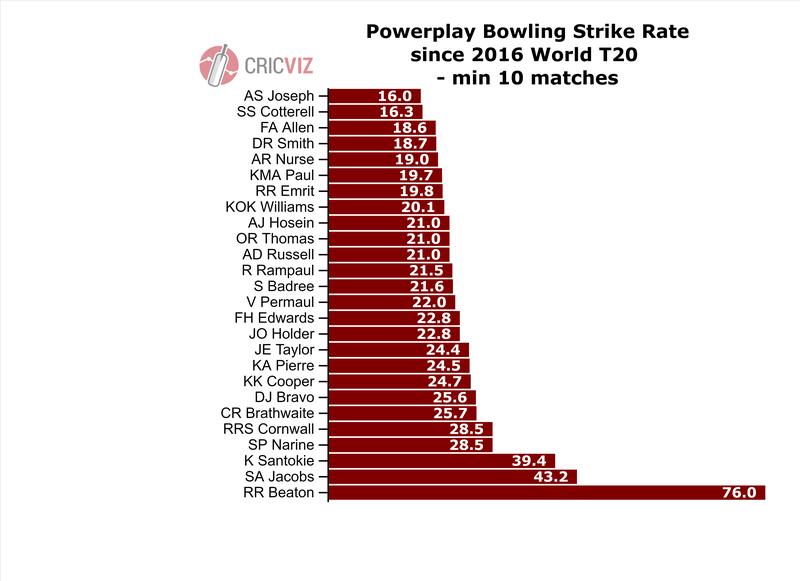 St Lucia Zouks star Kesrick Williams has been pushing his case for selection hard this year, in the CPL. 12 wickets in the 10 matches he played saw him end the season at the leading wicket-taker for the Zouks, who pressed hard for qualification but fell short in the end. Williams' value is greater than it might be because he bowls throughout the innings, with 38% of his overs bowled in the Powerplay, 24% in the middle overs, then 38% at the death; he is more versatile than some of the other options for the Windies. However, seamer positions are slightly more competitive than spin positions in this current Windies set-up, and Williams would probably need an even better season next year.

Selected for the most recent Windies T20I squad, Hayden Walsh Jr has enjoyed a true breakout season. Before this year of CPL, he had played just 10 professional T20 matches; a few months later, and 22 wickets in nine matches has catapulted him to the top tier of the game. An attacking leg-spinner, with US citizenship, his performance for Barbados Tridents has been defined by consistent wicket-taking. No other bowler in the last two seasons of CPL has a lower True Strike Rate than Walsh Jr, meaning that he's a significantly more effective attacking threat than other bowlers operating at the same point of the innings. The meteoric nature of his rise means that he does still have a lot to prove, and will need to sustain this success for a period before he's considered anything like a certainty for the tournament, but he has certainly caught the eye of everyone to watch him. 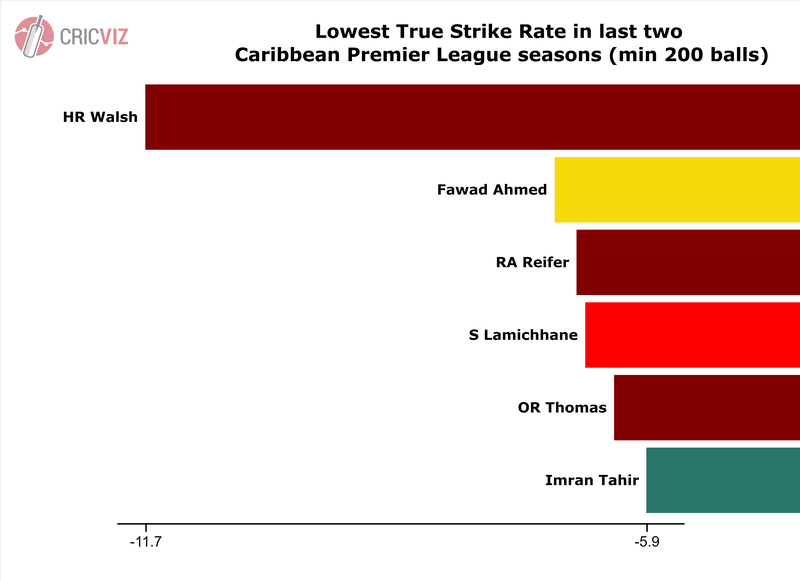 Since the 2016 World T20, no Caribbean bowler takes wickets more regularly than Alzarri Joseph in the Powerplay. Once every 16 deliveries he bowls in this period, he takes a wicket - in light of that, he's surely right in contention for selection. The St Kitts and Nevis Patriots star burst onto the scene a few years ago, but has been a consistent performer in recent times, the only blot on his record a slight tendency to be expensive; a true economy rate of +0.7rpo illustrative of how he can go the distance if he's not taking wickets.

Another member of the dominant Guyana Amazon Warriors squad, Shepherd is an attacking right-arm quick. He operates primarily in the middle overs, with 55% of his deliveries sent down in Overs 7-15, and just 12% in the Powerplay; as such, he isn't necessarily the most versatile, but he does make up for it in terms of wicket-taking threat when he does bowl. Amongst the established performers, he has the fourth lowest strike rate over the last two CPL seasons, proof that he can consistently trouble batsmen with the older ball. 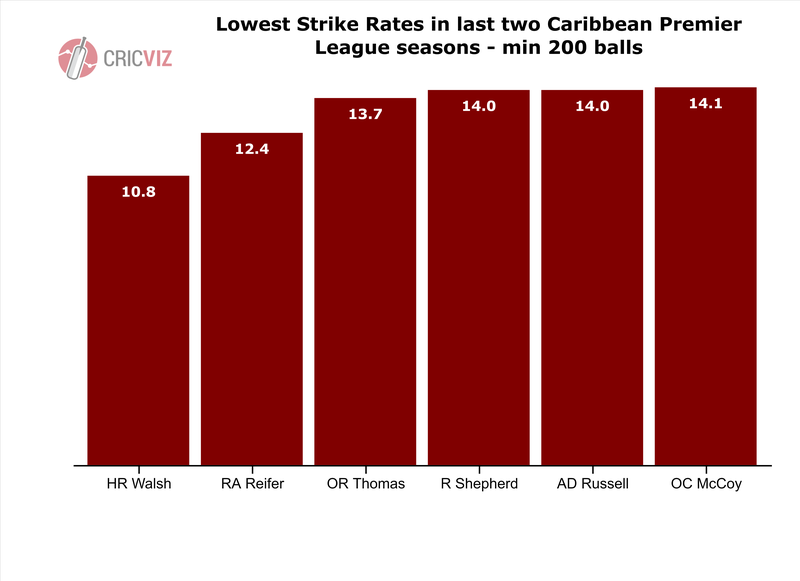 The Trinidadian spinner looks set to be one of the first names in the squad for Australia, on current form. Pierre has only played four T20 internationals for the West Indies, but has been part of the established elite group of Caribbean spinners in the last few years. Of the Windies spin bowlers to deliver 100+ balls since the start of 2017, only two (Sunil Narine and Imran Khan) have a better True Economy Rate than Pierre's -0.56, suggesting he's a valuable defensive asset. In an era when Windies white ball spinners are few and far between, Pierre's consistent record over the last few years could easily see him on the plane to Australia as the specialist spinner.

St Lucia Zouks seamer Obed McCoy has caught the eye this summer. At just 22 years old he's one of the youngest players seeking selection for the World Cup, and with just 17 T20s to his name is one of the least experienced, but his performance in his short career so far has been very impressive. A very versatile bowler who works throughout the innings, with 41% of his bowling done at the death, McCoy is certainly a useful player to have in the squad in terms of replacing established stars in a wider range of roles. However, at this stage it would likely take an exceptional CPL season next year to leapfrog other seamers in the queue.