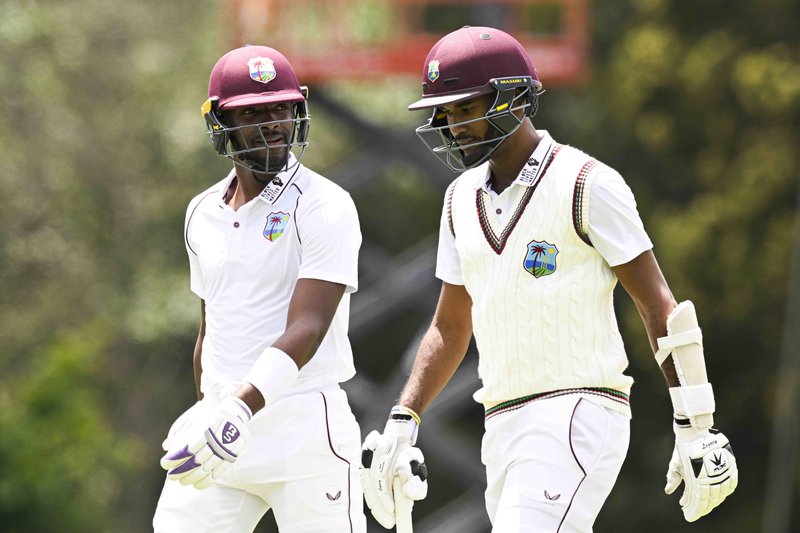 West Indies captain Kraigg Brathwaite and Shamarh Brooks both made half-centuries as they added a top-quality century opening stand on the opening day of their tour match against a combined NSW and ACT XI.

The pair added 133 with Brathwaite (75 off 114 balls with 10 fours) and Brooks (56 off 116 balls with five fours) playing several attractive strokes in the early exchanges at the Philip Oval on Thursday.

Sun is shining in Canberra: 15 degrees this morning in Day 1 of West Indies v ACT/NSW XI at Philip Oval

West Indies will resume Friday morning (Thursday nightCaribbean Time) on 297-5 with Jason Holder on 50 not out – the third half century of the innings – and Jermaine Blackwood on 42 not out. Holder has so far faced 75 balls and hit 10 fours while Blackwood has faced 141 balls with four boundaries.

Left-arm orthodox spinner Riley Ayre (3-70) bowled well to have the West Indies on 207-5 shortly after tea, before Holder with some positive shots and Blackwood with workmanlike resilience, took the visitors to the close. They have so far added 92 for the sixth wicket.

“I felt really good in the middle and was happy to get the opportunity to bat at the top. Karaigg also played well, and I was able to feed off his energy and the way he played,” Brooks said. “For me, it was a solid start as I look ahead to the Test matches against Australia.”

West Indies were without opener Tagenarine Chanderpaul who is unwell. The upcoming series against Australia will feature two Test matches for the Sir Frank Worrell trophy. The first Test is at Perth Stadium (30 November to 4 December) and the second Test is a pink ball day/night contest at Adelaide Oval (8-12 December).