ST. JOHN’S, Antigua – More intense rivalries are expected with the chasing teams eager to close the gap before it’s too late, when the second half of the 2019-20 West Indies Championship begins on Thursday.

The Championship resumes following a two-week break with chart-toppers Barbados Pride on 84.2 points – 23.4 clear of nearest rivals and five-time defending champions Guyana Jaguars, heading into the sixth of 10 rounds in the four-day competition. 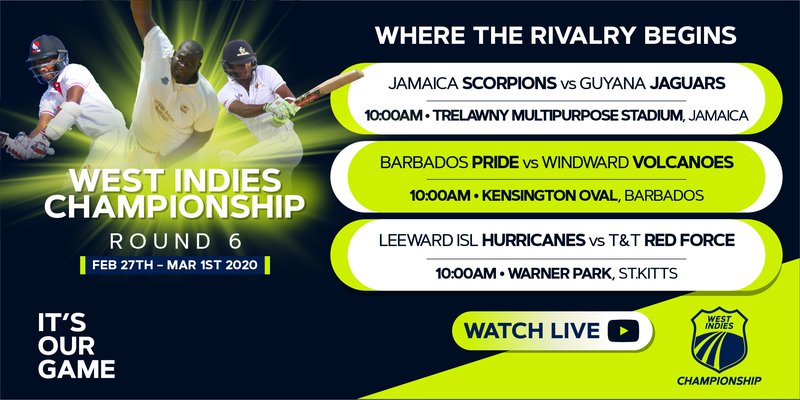 With a maximum of 24 points available to each side in every round (eight first innings points and four points for wickets taken by pace bowlers, plus 12 points for an outright winner), the jockeying for positions that took place over the first half of the Championship is expected to intensify over the coming weeks.

The feature match of this weekend’s play takes place at Kensington Oval, where Pride face a slippery challenge from Windward Islands Volcanoes.

A fierce battle is also expected at the Trelawny Multipurpose Complex, where resurgent home team Jamaica Scorpions meet the Jaguars.

Scorpions have surged into third place in the Championship table following two wins, including a seven-wicket victory over the Jaguars on the road in the fourth round.

The Jags’ defence of their title hit a further snag, when a strong second innings batting performance from Volcanoes held them to a draw in the previous round.

This sets up the battleground for an intense contest between the two sides with the Scorpions eyeing a third successive win to keep their surge on course and the Jaguars seeking to get back on track.

Scorpions’ will to win is enhanced by the reality that they have won their last two matches against the Jags, including this corresponding fixture last season, when they clinched an eight-wicket triumph.

They will be hoping the change of scenery from Sabina Park in the Jamaica capital of Kingston does not affect the trend and that they can complete a season sweep and stop the Jaguars from returning the favour of a defeat on home soil.

Both teams have been forced to make changes to their line-ups, but the Scorpions appear to be the hardest hit.

Hardworking pacer Derval Green has been sidelined with injury; off-spinner Peat Salmon, the hero of the previous match between the two sides, has been suspended from bowling by CWI because of a suspect action; and Guyanese left-hander Assad Fudadin, whose intimate knowledge of the opposition could be useful, has been omitted because of poor form.

Jaguars have brought spinner Gudakesh Motie and Akshaya Persaud into replace Test leg-spinner Devendra Bishoo and Shimron Hetmyer, who has flown to Sri Lanka to be part of the West Indies Twenty20 International squad for their imminent series against the hosts.

This will be a memorable match for Jaguars left-arm spinner Veerasammy Permaul, if he plays. He will be appearing in his 100th match in the Championship for the visitors, becoming only the sixth player in domestic West Indies first-class matches to have achieved this landmark. 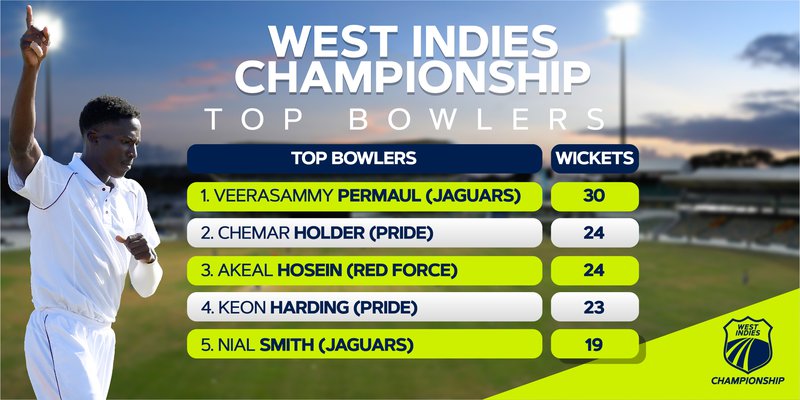 A number of other players stand on the threshold of personal milestones which could be accomplished in the match, if they play:

Pride vs Volcanoes in Bridgetown, Barbados

For a number of reasons, both sides are keyed up for this contest.

Pride will be facing the only side that has beaten them this season and hoping that home advantage will count again, as it has twice already. But Volcanoes will be looking to bring their new-found stability into play and look to complete the season sweep against their hosts.

Pride ended the first half of the season with four wins on the trot and a fifth over a side that from time to time has been their bogey would be welcomed. Volcanoes have drawn three of the four matches they have played since that opening victory and will be keen to give more proof of their resilience.

Though Pride have dominated the contests between the two sides in the Professional Cricket League era of the Championship, winning six of the previous 11 matches, the Volcanoes still have fresh in their memories last season’s trip to Bridgetown, which ended in a comfortable eight-wicket win.

Another factor that has raised the stakes in this duel in recent seasons has been the strong familiarity between the players on the two sides, which has led to them looking to secure bragging rights over each other, and that this intimate knowledge of the other side can breed success.

All-rounder Kyle Mayers is now in his first full season with the Pride, having made his first-class debut and played extensively during the past four seasons with the Volcanoes, whose line-up over the same period has regularly included Test batsman Kirk Edwards, a former Pride captain.

Volcanoes captain Kavem Hodge and leg-spinner Keron Cottoy have been firm fixtures in the University of the West Indies side that has dominated the top division of the Barbados domestic competitions in the last decade. Experienced batsman Andre Fletcher and off-spinner Shane Shillingford have also played in the Barbados club matches, and left-arm pacer Preston McSween made his first-class debut, playing one match for the Pride three seasons ago.

Pride will have a big selection decision to make about the composition of their attack with West Indies left-arm spinner Jomel Warrican returning to the squad following recovery from injury and considering the grass-covered nature of the pitch.

Volcanoes have boosted their pace attack with the addition of all-rounder Ryan John and fellow Grenadian Josh Thomas has returned following injury, only for Test pacer Shermon Lewis to now be similarly sidelined.

This too, could be a memorable match for long-serving Volcanoes left-handed opener Devon Smith. He now has 10,926 runs in 140 matches for the Volcanoes, making him the most prolific batsman in the modern era of domestic West Indies first-class matches (1966 onwards), and needs 74 more to touch 11,000.

A number of other players stand on the threshold of personal milestones which could be accomplished in the match, if they play:

Hurricanes will be seeking to quickly put the first half of the season behind them, having lost four of their first five matches. Red Force have gone off track with two defeats and a rain-marred draw, after an encouraging start.

Both teams, therefore, will be hoping that the second half of the season can bring them good fortune and they can finish strongly.

Red Force have dominated the contests between the two sides in the Professional Cricket League era of the Championship, winning six of the previous 11 matches, including an emphatic innings and 168-run victory in the second round of this season at the Brian Lara Cricket Academy.

This venue too, is the last place the Hurricanes would want to face their opponents, as Red Force have won four out of the five matches the two teams have played in the St. Kitts capital; the other match a high-scoring draw.

The Hurricanes squad is practically settled and with the return of pacer Jeremiah Louis to the squad, they could assemble the firepower to put the Red Force under pressure, but it will require their batting, which has badly let them down, to come to life.

(After the fifth round of matches) 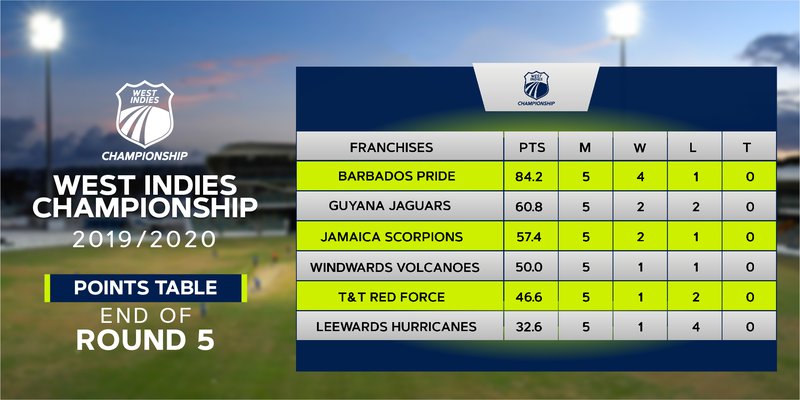