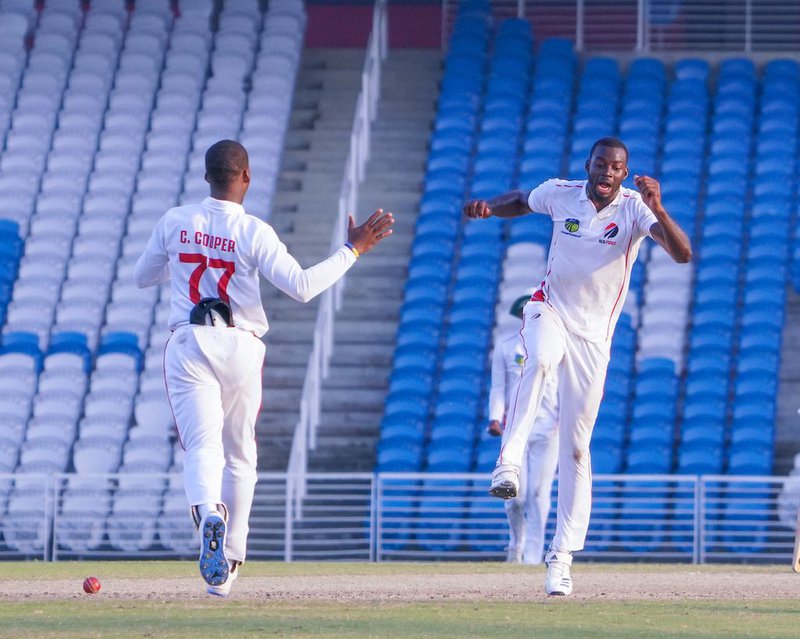 But West Indies wicketkeeper/batsman Shane Dowrich narrowly missed out on a hundred and came to the rescue of the Pride with fellow international Ashley Nurse, after another top-order batting collapse had the visitors in despair on the second day of seventh round matches in the Championship. 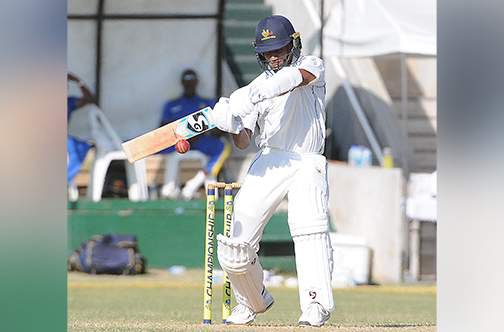 At the same time, Guyana Jaguars, their nearest rivals, failed to make inroads into the Leeward Islands Hurricanes batting, after Test left-hander Vishaul Singh too, missed out on a hundred.

And, Devon Smith became the first batsman to cross the mark of 11,000 career runs in the Championship to lead a solid reply from Windward Islands Volcanoes, after Paul Palmer defied a career-best spell from left-arm pacer Preston McSween to hit his third career hundred and second this season to extend the Jamaica Scorpions first innings.

RED FORCE (239) VS PRIDE 250-9 AT THE BRIAN LARA CRICKET ACADEMY IN TAROUBA, TRINIDAD

Phillip ended the day with 5-54 from 17.2 overs and was the pick of the Red Force bowlers. A measure of his accuracy was that three of his scalps were lbw, and Dowrich and left-handed opener Shayne Moseley were bowled.

His three wickets between lunch and tea undermined the Pride top order and soon the visitors were scrambling on 73 for six.

But Dowrich led the way with 96 and Nurse made 81, sharing a record 159 for the seventh wicket to turn things around for the Pride. The stand superseded the mark against these opponents of 126 between Keith Boyce and Vanburn Holder 46 years ago at Kensington Oval.

The match, however, was hanging in the balance when stumps were drawn, after Nurse, Dowrich and Keon Harding, who was adjudged lbw to Phillip in the final over of the day, all fell in the final hour.

Red Force, resuming the day on 192 for five, were bowled out in the final half-hour before lunch.

Joshua da Silva added 10 to overnight score to finish with the top score of 77, but there was token resistance from the rest of the batting – captain Imran Khan made 23 and Uthman Mohammed added 22 before the innings came to a conclusion.

Chemar Holder claimed two of the last five wickets to end with 4-68 from 23.5 overs and Kevin Stoute bagged 3-30 from 20 overs.

SCORPIONS (381) VS VOLCANOES 132-2 AT THE NATIONAL CRICKET STADIUM IN ST. GEORGE’S, GRENADA

The left-handed Smith reached his personal landmark in his 142nd match in the Championship, when he got a single off Jamie Merchant’s off-spin before Kavem Hodge was lbw two deliveries later to the same bowler.

Volcanoes were 79 for two, but Smith, unbeaten on 67, and fellow Grenadian Andre Fletcher, not out on 22, shared 53 – unbroken – for the third wicket to steady the innings.

Earlier, McSween ended with 6-64 from 25 overs, but Palmer was undefeated on 114 and anchored the lower half of the Scorpions batting, after they continued from their overnight total of 285 for three.

Scorpions lost first day century-maker Nkrumah Bonner lbw to former West Indies Under-19 World Cup-winning pacer Ryan John in the second over of the day for the top score of 135.

Bonner and Palmer put on a record 162 in total for the fourth wicket, which eclipsed the previous mark against these opponents of 126 between Palmer and West Indies international Brandon King two seasons ago at the Daren Sammy Cricket Ground in St. Lucia.

The visitors were 290 for four and required Palmer to draw on all of his experience to frustrate the Volcanoes and farm the bowling.

None of the other batsmen that came to the crease on the day reached 20 with McSween cleaning up four of them.

JAGUARS (259) VS HURRICANES 73-2 AT THE GUYANA NATIONAL STADIUM IN PROVIDENCE, GUYANA

Opener Montcin Hodge, not out on 21, and left-hander Amir Jangoo, not out on 22, batted through a little more than an hour to keep the Jaguars attack at bay.

Left-arm spinner Veerasammy Permaul, the season’s leading bowler, made the breakthrough for the hosts, when he bowled Test batsman Kieran Powell for 13 and off-spinner Kevin Sinclair trapped Ross Powell for six.

Hurricanes were 40 for two, but Hodge and Jangoo, the visitors’ draft choice from T&T, shared 33 – unbroken – for the third wicket to deny the Jaguars from making further inroads into the batting.

Earlier, Singh fell for exactly 90 – the second time this season he has been dismissed with a hundred in reach – after the Jaguars resumed from their overnight total of 115 for four.

Fellow left-hander Raymon Reifer supported with 43 and put on 93 for the fifth wicket with Singh; Permaul was not out on 24 and Anthony Bramble added 23 to extend the Jaguars first innings.

Jeremiah Louis cleaned up all three plus Sinclair to end with 4-49 from 24 overs and fellow pacer Kian Pemberton grabbed 2-54 from 18.5 overs to bring the innings to a close.

(Before the seventh round)

NOTE: Bonus points are only added to the Points Table at the conclusion of each match.