News
/
WI MADE IT TO ONE MILLION SUBSCRIBERS ON YOUTUBE!!

WI MADE IT TO ONE MILLION SUBSCRIBERS ON YOUTUBE!!

In June 2019, CWI and Little Dot Studios joined forces to relaunch the channel when subscribers numbered just 560. Since then, the YouTube channel has become a primary source of match highlights, live streamed matches and player content for West Indies fans around the world.

The move to increase the availability and accessibility of West Indies, Super50, and West Indies Championship content is a key part of Cricket West Indies five-year strategic plan for West Indies fans and cricket fans in the Caribbean.

Since June 2018, the WINDIES Cricket YouTube channel has received over 142 million views with 812 million minutes of content watched by fans. In July 2019 alone, there has been over 42 million views of the West Indies A vs India A live streamed matches and related highlights. 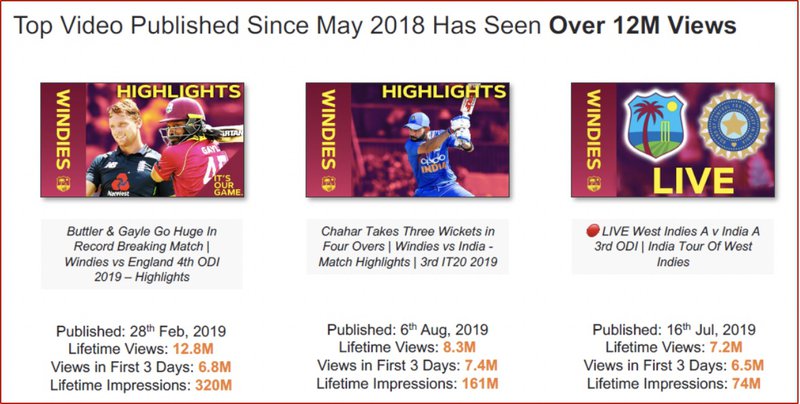 After passing the milestone of 500,000 subscribers in March 2019, the WINDIES Cricket YouTube channel has doubled subscribers in just five months. The highlights of the West Indies vs England 4th ODI in February received 6.8 million views in the first 72 hours, with 320 million lifetime impressions so far, after Chris Gayle and Jos Buttler went toe-to-toe in Grenada.

CWI’s Commercial Director Dominic Warne is delighted with the growth, saying ”One of our key goals is to increase the opportunities for West Indies fans to access both cricket and player content easily and affordably. The WINDIES cricket YouTube channel helps us deliver this and give fans the opportunity to explore much more about their favourite players and tournaments. We appreciate the positive response we’ve had from West Indies fans around the world.

Warne continued, “Fans can access highlights on both www.windiescricket.com and our YouTube channel on demand as well as being able to see live cricket from the West Indies women, A Teams, Super50 and the West Indies Championship. This is live cricket which we would have otherwise been unable to broadcast to a wide audience. ”

The channel continues to grow and there is an exciting upcoming schedule of West Indies international match highlights and live streams, including all six West Indies Women vs Australia Women ODIs and T20Is in September:

CWI’s partner, Little Dot Studios is a digital content studio and broadcaster specializing in the production of original and brand funded content, distribution and monetization of video content across all social platforms.