Captains say it will be an intense contest, as the players compete in the warm-up match for spots to face South Africa.

GROS ISLET, Saint Lucia – The leading red ball players in the Caribbean will be on show, as the West Indies training squad stage an intra-squad four-day “Best v Best” match as part of their intense preparations for the upcoming Test Series against South Africa.

The players are all excited and fully prepared for the contest, as this is the culmination of two weeks of high-level training. It is the only competitive action they will have before the squad is selected to take on the Proteas. The players have been in camp in St. Lucia since Sunday, May 16.

Another productive morning of training for the #MenInMaroon

WI are gearing up for the ‘Best v. Best’ match starting on Monday! 🏏🌴 pic.twitter.com/FaF7aT5hDV

West Indies fans will be keen to pay close attention to the match as the build-up continues to the return of international cricket to the region.

The match starts on Monday at the Daren Sammy Cricket Ground. First ball daily is 10am (9am Jamaica Time) and the match will be streamed live on the Windies Cricket YouTube channel.

The links for each day’s live coverage are as follows:

The squads have been confirmed by the Cricket West Indies Selection Panel, with 14 players named per squad and 11 players batting in each innings. Squad A will be captained by middle-order batsman Jermaine Blackwood, while Squad B will be led by wicketkeeper/batsman, Jahmar Hamilton.

Hamilton is humbled and eager to lead one of the squads, especially considering the importance of this contest to all involved.

Jermaine Blackwood was equally as elated and is adamant that the fans will be treated with a fine contest.

“The fans can expect great cricket over the next four days, because we have some very competitive athletes here. We are ready to go play some exciting cricket starting tomorrow. We are a group of hungry players, who are ready to showcase our talent to the selectors and coaches. I am very honoured to be leading one of the teams. Fans can tune into the West Indies YouTube page to watch the game live.”

WI had a quick chat with the #MenInMaroon Head Coach @Coachsim13, ahead of the ‘Best v. Best’ 4-Day match scheduled for May 31 - June 3 in St. Lucia! 🇱🇨🏏🌴 pic.twitter.com/tKFlC7EyYR

The two-match Test Series against South Africa will also be played at the Daren Sammy Cricket Ground for the Sir Vivian Richards Trophy on June 10-14 and June 18-22 and are the final matches in the current cycle of the ICC World Test Championship. The visitors are due to arrive on the island on Tuesday, June 1.

Four players who played in the recent series against Sri Lanka will be unavailable for the “Best v Best” match. Jason Holder, the ICC’s Number 1 ranked Test all-rounder arrived in St. Lucia on May 28 and after going through the agreed quarantine protocols will begin training on June 1 once he has returned two negative PCR tests. Test Captain Kraigg Brathwaite and fast bowlers Kemar Roach and Alzarri Joseph are arriving in St Lucia later this coming week following their English County Championship commitments. They will join training after completing the quarantine protocols and once they respectively return two negative PCR tests each. 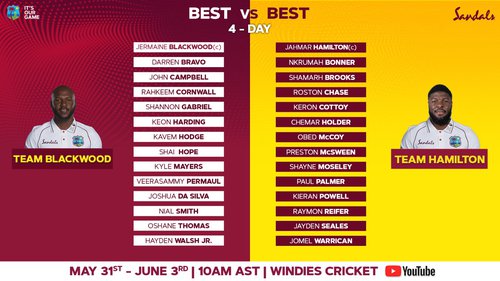