ST JOHN’S, Antigua – The Cricket West Indies (CWI) Selection Panel today named the West Indies Men’s squad for the first Apex Test match against England, as well as the CWI President’s XI squad for the four-day warm-up match. The first Apex Test will be played at the Sir Vivian Richards Stadium from March 8-12, following the warm-up match at the Coolidge Cricket Ground (CCG) from March 1-4.

The 2nd Century of the #WIChamps season!💯 How good was Campbell today for the Scorpions?🙌🏾 pic.twitter.com/zqsm1KaKSl

In the West Indies Test squad, there is a maiden call-up for fast bowler Anderson Phillip and a recall for opener John Campbell. Both players were impressive in the first two rounds of the current West Indies Championship, with 25-year-old Phillip from Trinidad & Tobago Red Force, taking 12 wickets at an average of 14.25 per wicket, with best figures of 5-82 against Jamaica Scorpions and 28-year-old Campbell from Jamaica Scorpions hitting 213 runs at an average of 53.25, including 127 against Barbados Pride. 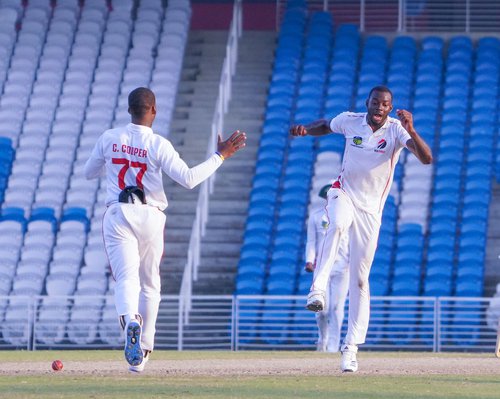 The West Indies squad will assemble in Antigua from February 25 for a training camp ahead of the Apex Test Series.

Shane Dowrich, the experienced wicketkeeper/batsman has been named as captain of the CWI President’s XI with Raymon Reifer, the left-handed allrounder as the vice captain.

“Anderson Phillip bowled extremely well and was very impressive in the first two rounds of the West Indies Championship and we decided to give him an opportunity in the Test squad to face England. He has been around the squad before in white ball cricket, so he has some experience at the international level.”

Haynes added: “I expect us to be very competitive against England. This should be a very exciting series, with a lot of players who are out to make their mark. We have a squad that has some experienced players, as well as some exciting young players and we expect them to equip themselves well and do the job.”

Tickets are on sale for the 1st Apex Test Match at windiescricket.com/tickets. Party Stand and special hospitality seats will be announced in the next 48 hours, with the warm-up match tickets going on sale on Wednesday, February 23 with prices from US$10 each/EC$30 each.