The Jamaica Scorpions are in the CG United Super50 Cup Finals!👏🏿#CGUnitedSuper50 #BringIt pic.twitter.com/SQT3q8nvQQ

Guyana appeared to have the advantage when they posted 318-9 – the highest score of the tournament – off their 50 overs at the Sir Vivian Richards Stadium. Powell then stepped up to the plate and made a high-quality 105 not out from 92 balls to ensure Jamaica overhauled the target to in by three wickets with 11 balls to spare.

Jamaica's Captain taking the match into his own hands! #CGUnitedSuper50 #BringIt

He was not lacking in support. Opener Brandon King lashed a swift 64 from 49 balls, keeper Alwyn Williams struck 45 from 50 balls while the lower order weighed in with invaluable cameos which combined to help Scorpions’ cause. 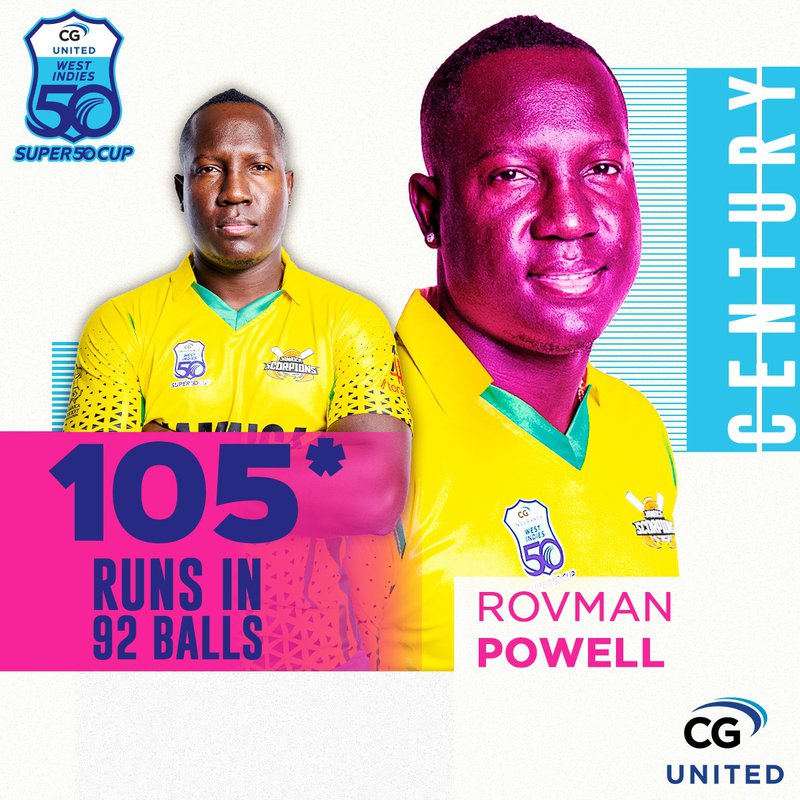 “Adjectives are inadequate in explaining how I feel,” said Powell. “I’ve scored two hundreds for West Indies and this goes up there as one of my better hundreds. It’s a semi-final, a pressure game and it’s in a chase so it’s special for me.”

Shimron Hetmyer had earlier top-scored with an entertaining 86 from 76 balls after Guyana chose to bat first in the second day/night semi-final. Sherfane Rutherford added 56 off 43 deliveries, Kevin Sinclair slammed 45 not out from 33 balls while captain Leon Johnson (30) and Romario Shepherd (28) also shone as Harpy Eagles eclipsed Trinidad and Tobago Red Force’s previous tournament high of 312 made in Wednesday’s first semi-final.

“I don’t think we executed our plans and our skills well when we bowled,” Johnson said. “I think 318 was enough. It’s well above par on this ground and I think Jamaica came out aggressive in the power-play – we expected that – but I think we could’ve bowled a bit better.”

Powell then erased any doubt over the result. He started quickly, reaching his half century from 38 balls before gearing down and posting 103 for the fifth with Williams, 34 for the sixth with Bulli (17), 37 for the seventh with Smith and a further 37 in an unbroken eighth wicket stand with Jeavor Royal (18 not out).