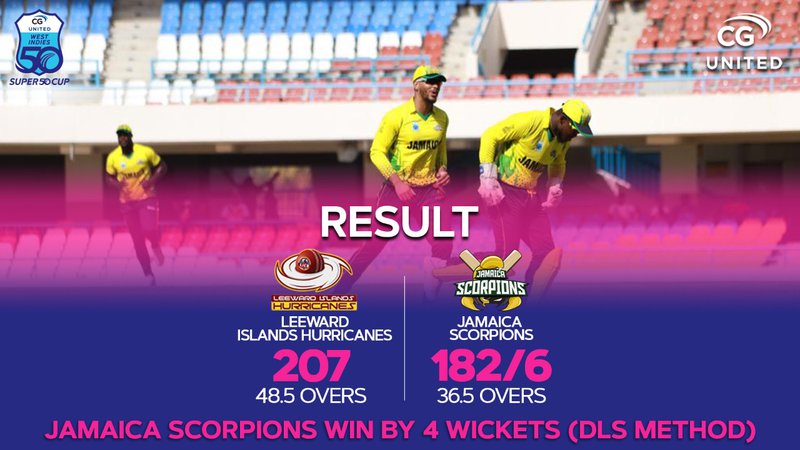 Brandon King missed out on a century as Jamaica Scorpions inflicted Leeward Islands Hurricanes with their first defeat of the CG United Super50 Cup on Friday. He made 87 from 95 balls to spearhead a run chase that saw Scorpions overhaul a revised target of 179 in the 37th over of the 40 allotted, to win by four wickets under Duckworth-Lewis-Stern method

Crucially, he ensured Scorpions’ start was a sound one, posting 102 for the first wicket with vice captain Chadwick Walton whose 41 came from 62 balls. King struck eight fours and three sixes in his first half-century of the campaign, after getting several starts but failing to convert.

Hurricanes had earlier faltered after choosing to bat first at Coolidge Cricket Ground, bowled out for 207 in the penultimate over of the 50. Captain Jahmar Hamilton struck his second successive half century with 54 from 64 balls while Terrance Ward chipped in with a patient 32 from 72 balls and Jermiah Louis, 31 from 46 balls in the lower order.

Left-arm spinner Dennis Bulli moved his tally for the tournament to 12 with a haul of 3-46 while left-arm quick Sheldon Cottrell (2-6), off-spinner Peat Salmon (2-32) and fast bowler Nicholson Gordon (2-38) all claimed two wickets each.

It was Cottrell who rocked the innings when he removed left-hander Kieran Powell (9) and Keacy Carty (0) cheaply in the seventh over with the score on 21, and when Ross Powell followed for 13 in the 10th over, Hurricanes were wobbling on 26-3.

Hamilton then led the rebuild, striking half-dozen fours and a six in adding exactly 100 runs for the fourth wicket with Ward who notched two fours. When four wickets tumbled for just 12 runs to leave the innings again tottering at 126 for four in the 30th over, Louis arrived to put on an important 39 for the eighth with Hayden Walsh (17).