Dowrich, Roach, Chase and Hetmyer among others to move up in latest rankings update

Captain Jason Holder has become the first Windies player in 45 years to top the list of all-rounders in the MRF Tyres ICC Test Player Rankings after slamming an unbeaten double-century that helped script a memorable 381-run win over England in the first Test in Bridgetown. Sir Garfield Sobers was at the top last in March 1974 and Holder has now emulated him following his 202 not out off 229 balls in the second innings in Bridgetown, which is the third highest score by a number eight batsman in Test history after the Pakistan pair of Wasim Akram (257 not out) and Imtiaz Ahmed (209). Holder, who was associated in an unbeaten seventh-wicket partnership of 295 with Shane Dowrich (116 not out), leapfrogged Bangladesh’s Shakib Al Hasan and India’s Ravindra Jadeja to grab the Number One spot for the first time in his career. Holder has also moved up the batting rankings to take a career-best 33rd position, after gaining 25 places. Dowrich has moved up to a career-best 47th position among batsmen, having also scored 81 in the first innings of the match. Others to benefit in the update, that also took into account performances in the first Test in Brisbane which Australia won against Sri Lanka by an innings and 40 runs, included Shimron Hetmyer (up 11 places to 40th) among batsmen and Kemar Roach (up five places to 20th) and Roston Chase (up 14 places to 41st) among bowlers. For England, Ben Stokes has moved up one place to 29th among bowlers. MRF Tyres ICC Test Player Rankings (as of 27 January 2019, after the Bridgetown and Brisbane Tests) 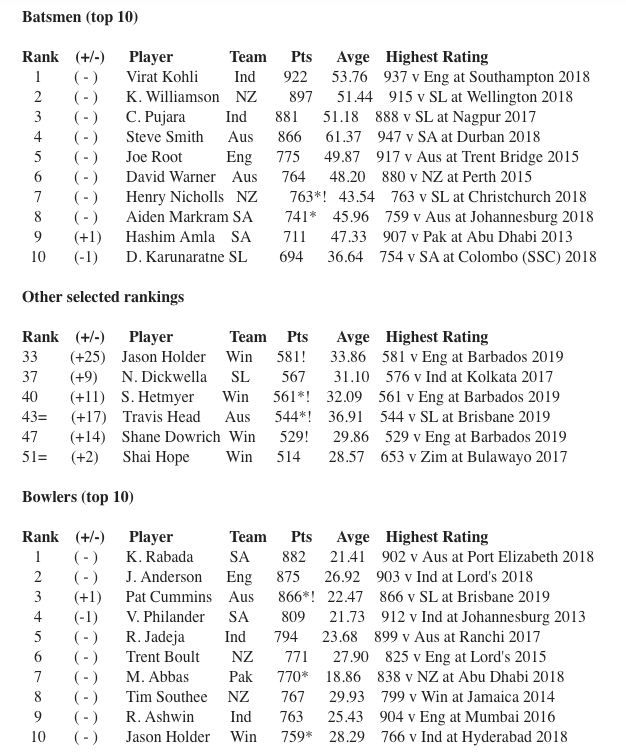 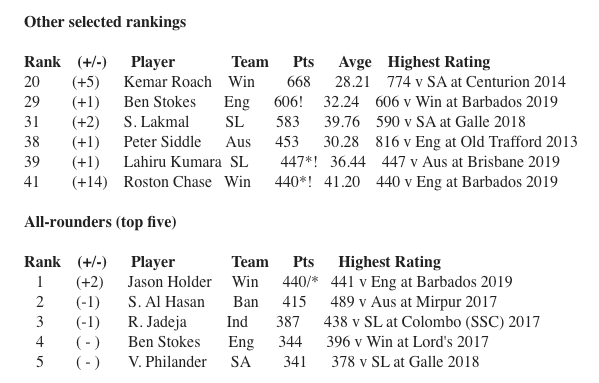