Dottin and Matthews take West Indies to Super Over win

Deandra Dottin dominated a sensational one-over eliminator to hand West Indies Women victory, after their run-chase ended in a dramatic tie on Monday. In pursuit of 161 in a contest reduced to 41 overs per side due to rain, West Indies Women slumped to 83-6 in the 21st over, with Dottin’s top score of 37. However, a 54-run, seventh wicket stand between Chedean Nation (35) and Player-of-the-Match Chinelle Henry (26) hauled West Indies Women back into the contest and put them back on course. 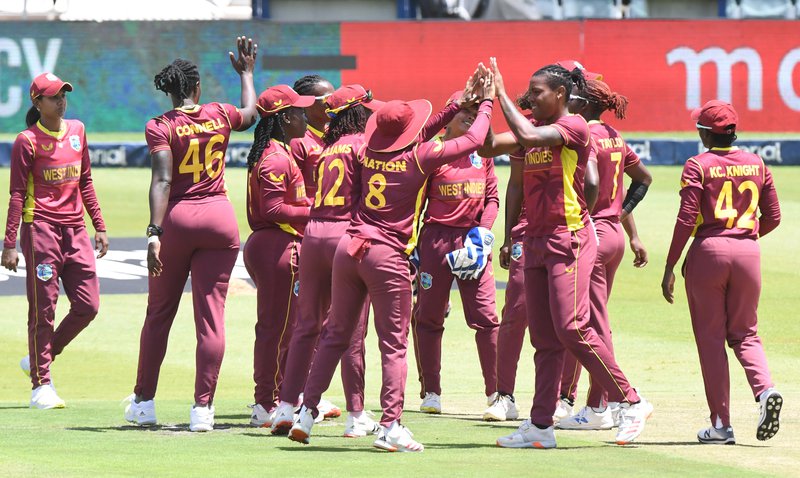 The pendulum swung yet again when Henry and new batter Shamilia Connell (0) fell to successive deliveries at the start of the 32nd over but Nation put on 21 for the ninth wicket with Shakera Selman (11), to get West Indies Women within three runs of their target before Selman was last out. She pinched a single at the end of the 37th to draw the scores level but then missed a full length delivery from seamer Shabnim Ismail and was leg-before wicket.

Once in the super-over, Dottin stamped her authority, plundering 19 runs from the first five balls before her partner Hayley Matthews smashed the final ball over mid-wicket for six, to leave the visitors defending 25 runs. Facing a tall order, South Africa Women gathered 15 from the first four balls but off-spinner Matthews finished the over strongly, getting the wicket of Tazmin Brits stumped off the last ball.

“For us, we’re quite pleased. Looking back at the game, it shouldn’t have come down to this but it’s exciting,” said a calm West Indies captain Stafanie Taylor. “I guess West Indies love a bit of excitement. I’m glad the way we played in the super-over. Deandra and Hayley really played well and then Hayley finished it with the ball.”

West Indies Women had earlier produced an efficient performance with the ball after opting to bowl first, bundling the hosts out for 160 in the final over. Openers Brits (25) and Laura Wolvaardt (25) posted 53 for the first wicket, and captain Sune Luus arrived at number four to punch a breezy 46 from 52 balls, but South Africa Women lost their last seven wickets for 69 runs. Matthews (2-21), fellow off-spinner Karishma Ramharack (2-37), along with quicks Shamilia Connell (2-22), Henry (2-32) and Shakera Selman (2-47), all finished with two wickets each.

Dottin then picked up from where she left off in last week’s abandoned opener when she notched a sparkling hundred, lashing five fours and two sixes in a quick-fire 31-ball knock. She lost Rashada Williams (1) in the second over to a catch at wide slip off seamer Masabata Klaas (2-42) and put on 24 for the second wicket with Kycia Knight (3), before the left-hander scooped fast bowler Ayabonga Khaka (5-26) to cover in the seventh.

West indies now lead the four-match series 1-0 after the first match was a no-result due to rain. The two teams will return to the same venue for the third match on Thursday for a day/night encounter. First ball is at 2pm local time (8am Eastern Caribbean Time/7am Jamaica Time).