This is CWI’s largest ever media rights agreement in the USA and is the first of several new multi-year agreements which we will confirm in the coming weeks. Broadcast media rights income is crucial to the future financial sustainability of CWI, and this five-year rights agreement is just the start of good things to come.

The ESPN+ partnership will feature live broadcast of every international West Indies home series covering all T20 Internationals, One-Day Internationals and Test matches within the International Cricket Council’s (ICC) Future Tours Programme (FTP). Commencing with the all-format Tour of the Caribbean by Sri Lanka in March, ESPN+ first year will feature series against South Africa, Australia and Pakistan in 2021 building to five home series in 2022 including tours by England and India.

The new agreement also includes CWI’s marquee regional 50-over tournament, the CG Insurance Super50 Cup, which is also aired exclusively in the Caribbean by ESPN. The CG Insurance Super50 Cup will be the first live cricket from the West Indies in the partnership, as the biggest regional rivalries and world class players take the stage from February 7 to 27 at the Coolidge Cricket Ground and the Sir Vivian Richards Stadium in Antigua http://www.windiescricket.com).

ESPN is THE sports channel for American households and sports fans and we’re delighted that West Indies cricket will now be enjoyed in the homes and on the devices of millions of Americans. We have an ambitious strategic plan to grow our brand and content in North America, and ESPN is the perfect partner to help us achieve our goals.

Cricket West Indies is among the best in the world and their ICC schedule over the next few years is second to none,” said John Lasker, Vice President, ESPN Digital Media Programming. “Cricket has always been a priority for us with ESPNcrincinfo leading the way as the premier destination for cricket coverage and news. Adding a strong slate of CWI events to ESPN+ is just the latest example of our commitment to cricket and serving fans with the best, most comprehensive cricket content in the U.S. 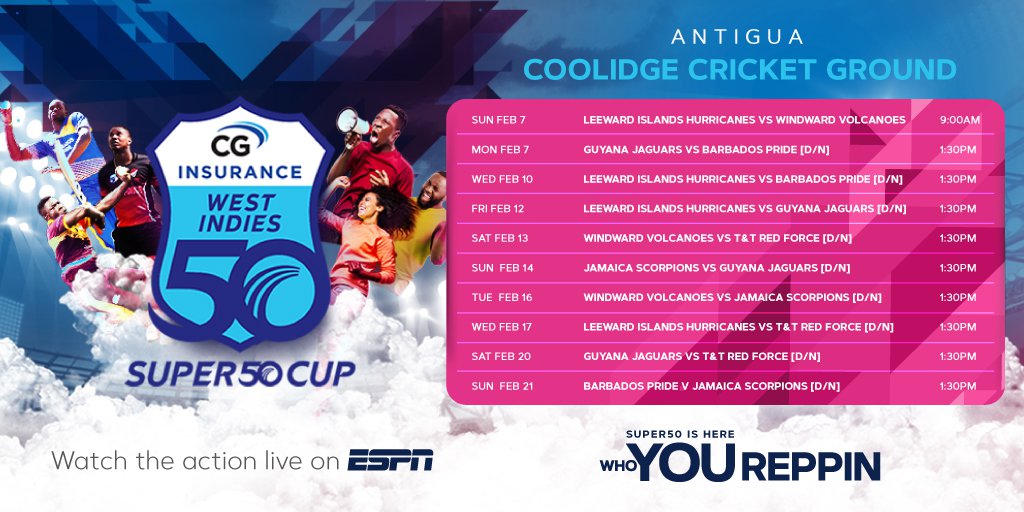