West Indies levelled the T20I series against India with victory in Thiruvananthapuram. After Virat Kohli's side posted 170-7 in their innings, Kieron Pollard's touring team went about chasing it down with aplomb. With nine balls to spare - and eight wickets in hand - they toppled the Indian total, and ensured that the final match in the series will be a decider.

The backbone of the West Indies chase was ostensibly the innings from Lendl Simmons. The experienced opener blasted an unbeaten 67 (45) to anchor the Windies effort as cameos from Evin Lewis, Shimron Hetmyer and Nicholas Pooran propelled them to the target.

However, it wasn't just the efforts of Simmons which won the West Indies this match, but their commitment to a strategy which has served them well. The focus on six-hitting, to the detriment of other scoring methods, has been the foundation of the West Indies batting approach in T20s for the best part of a decade. It's brought them titles around the world, and given them a clear identity.

Since the World T20, they have hit a six every 15.6 deliveries; of all the teams to play 30+ matches in that time, only two sides (NZ and AFG) have hit sixes more regularly. When you consider the very reasonable factors at play there, the size of New Zealand's home grounds and the standard of opposition for Afghanistan, that is a significant achievement for the Windies. They have hit 288 sixes since that World T20 and the only side to beat that is India - hence why this series feels so significant looking ahead to next year. Equally, it's a series which has followed this strategic pattern, and taken it to the next level. The 12 sixes that West Indies hit in this second match backed up the 15 they hit in the first - only once since the World T20 have they hit more in a single innings than they did in the opener. 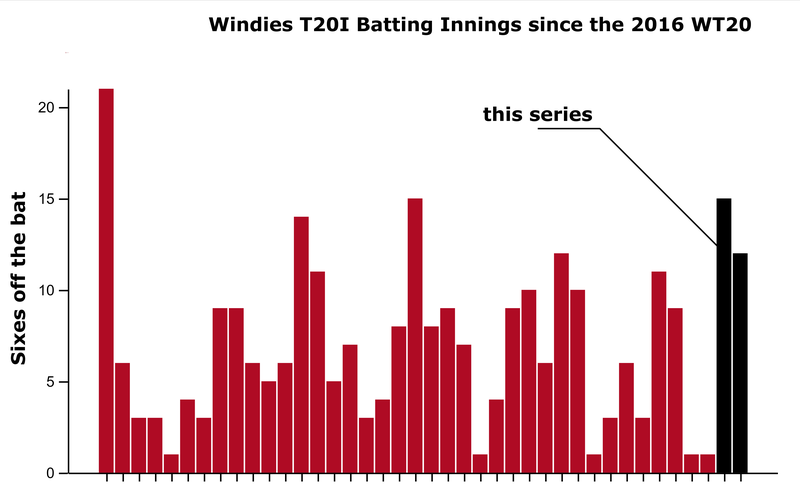 What this strategy does, of course, is ensure that the West Indies always have a hope of reaching any total, because they are such an explosive batting order given license to play freely. It is why, even as the older stars of Chris Gayle's generation are coming to the end of their careers, there is another chunk of six-hitters coming through; they recognise that this is how Caribbean T20 cricket is played, and they seek to emulate it. They have, as noted in the newly published history of T20 cricket, entitled 'Cricket 2.0', created the first T20 international dynasty.

The next task for this six-hitting dynasty is to seal the series against India tomorrow, then to move on in their World Cup build-up - it's an exciting time to be a West Indian T20 fan.