News
/
CricViz - Which Batsmen Will Be At The T20 World Cup?

CricViz - Which Batsmen Will Be At The T20 World Cup?

With the T20 World Cup in Australia just 12 months away, cricket analysis specialists CricViz have considered the cases for all the Caribbean players in contention for the squad. In the first of a three part series, they take a look at the batsmen who will have their eyes on selection.

Once seemingly destined for greatness - heir apparent to the throne of Chris Gayle as West Indies’ bruising left-handed opening batsman - Lewis’ career has run into troubled waters in the last couple of years. After a stunning 2017 Caribbean Premier League Lewis won a contract at Mumbai Indians, and he appeared ready to make the step from promising to elite - however, a disappointing 2018 (during which he averaged just 11.45 in the CPL) halted his progress. This year has brought slightly improved results and a strong CPL suggests he is moving back towards his best but he’s certainly not a lock yet. 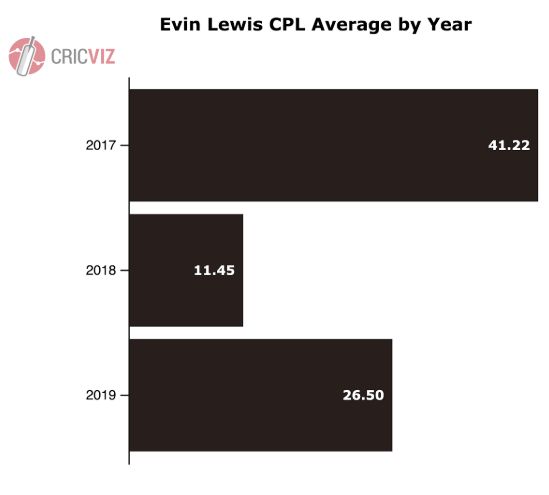 A sensational 2019 CPL for the right-handed, Jamaican-born batsman, King - in which he finished as the top-scorer with 496 runs - has catapulted himself into the frame for World Cup selection and is likely to be vying for one of three opening spots with Lewis, Gayle and Lendl Simmons. King’s biggest asset is his strong game against spin - which should help the West Indies top order avoid negative match-ups. His biggest drawback remains his inexperience - the 2019 CPL was only the first time he had opened the batting in T20. 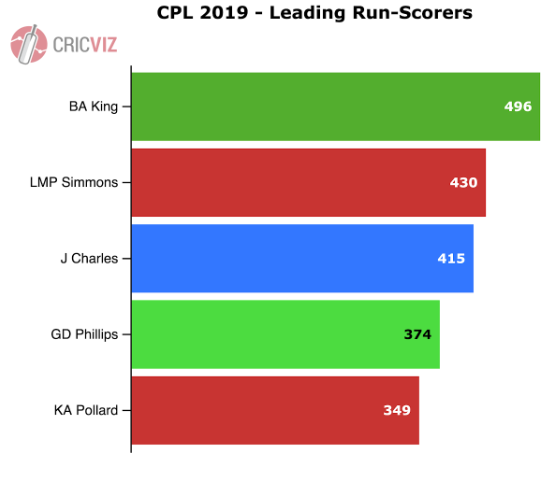 The defining batsman of the first era of T20 cricket. Does Gayle have one last hurrah in him before he finally swaggers into the sunset? Recent history would caution against writing Gayle off. At numerous stages in the last half decade it has seemed as if time has finally caught up with the left-handed titans and every time he has raged against the dying light. Gayle remains one of the most destructive batsmen in the world on his day but whether ‘his day’ comes around often enough may determine whether he can maintain his place in the squad, especially as his fitness, fielding and bowling value continues to diminish. 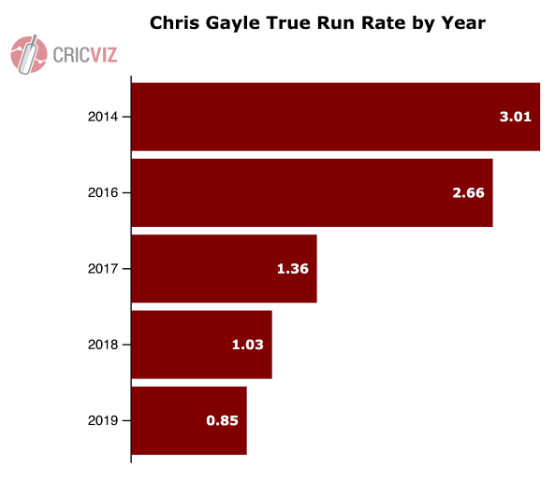 The left-handed dynamo from Guyana had a disappointing 2019 CPL campaign, averaging just 20.36 at a run rate of 7.42 runs per over. After a stop-start debut IPL season 2019 has been something of a disappointment for Hetmyer after his breakthrough 2018. His talent is not in any doubt though and it would be a surprise if he did not find himself on the plane to Australia in a year’s time. Hetmyer’s dominance against spin in particular makes him a valuable asset, especially in the middle overs. 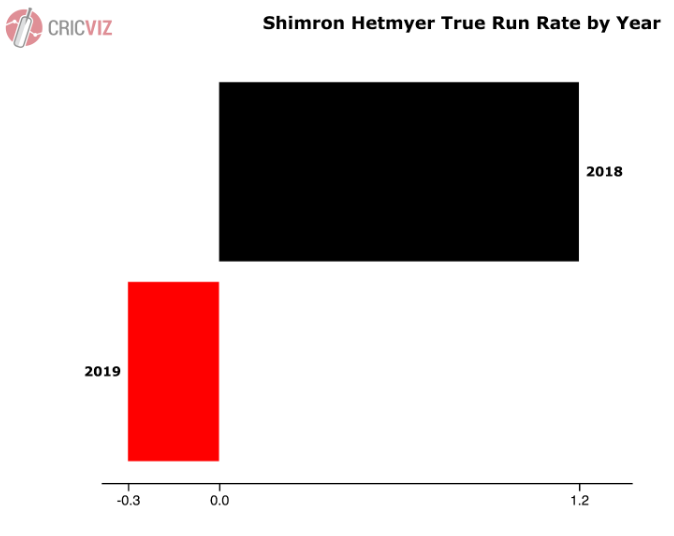 Barring a dramatic and sudden loss of form Pooran is a lock to go to Australia as West Indies wicket-keeper batsman. The left-handed tyro is one of the most destructive middle overs batsmen in the world and is exceptionally strong against spin. In the last 18 months Pooran has added raw power to his 360 degree game and has elevated himself from merely promising to a world leading player. An improving wicket-keeper Pooran is clear favourite to take the gloves next October. 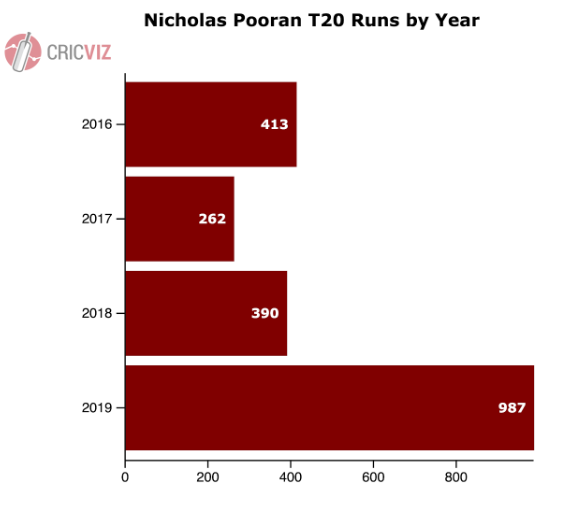 Pollard no longer bowls enough to be considered an all rounder but his position as captain and one of the best, most powerful and most versatile T20 batsmen in the world makes him a lock for next year’s tournament. The World Cup next year offers Pollard the chance to finally emerge from Gayle’s enormous shadow. Aged 32 Pollard could have many years at the highest level ahead of him and has perfected middle and death overs batting across an epic career. A master of his craft and a sure-fire pick in the West Indies middle order. 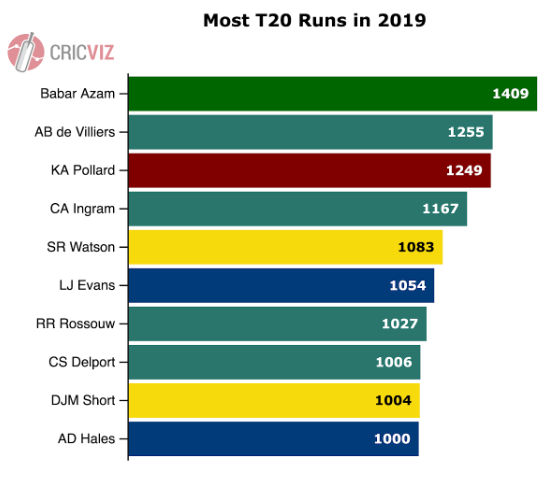 Initially pigeon-holed as a long-form batsman Bravo demonstrated evolution to his game in the last couple of years - elevating his run rate and establishing himself in the Trinbago Knight Riders middle order before winning contracts with Kolkata Knight Riders and Multan Sultans before going onto appear for the West Indies once again. However, 2019 has seen a regression to his game with this run rate falling to a woeful 5.88 runs per over. His class has never been in doubt but with competition for spots fierce it is hard to see Bravo forcing his way back into the fold. 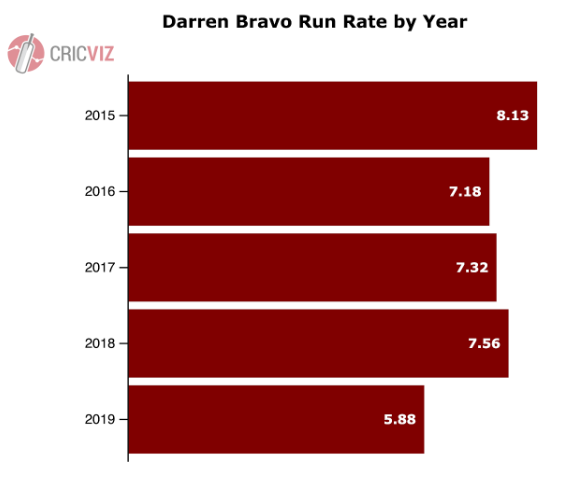 Before the start of the 2019 CPL Simmons’ hopes of appearing in the World Cup were slim. His last international T20 was as long ago as June 2017 and the extent of his decline was encapsulated when he was passed up in this year’s CPL draft. However, when Colin Munro withdrew from the tournament he was signed as a replacement player and took his chance with both hands. Simmons’ season tally of 430 runs was second only to King’s 496 and in doing so he has served everyone a reminder of his talent and won his place back in the West Indies squad. Edging out Gayle, Lewis and King remains unlikely but it’s not impossible for a man who refuses to go away.