A shock defeat to Pakistan has left the West Indies Women on the verge of elimination from the ICC T20 World Cup. With two points from their opener against Thailand all that Stafanie Taylor's side have to show for their campaign so far, they are left most likely needing to beat both England and South Africa if they are to progress to the knockout stages.

Their first must-win encounter comes against England at Sydney Showground on Sunday afternoon.

Heather Knight's team have already lost to table-toppers South Africa, and will be just as eager to get their campaign back on track. England are a strong outfit, starting the tournament as one of the favourites with the bookies, and they will take some beating. However, there are some key weaknesses that the Windies should look to exploit if given the opportunity.

England's opening pair have been in poor form over the last few months. Danielle Wyatt and Amy Jones have scored just 48 and 44 runs respectively in 2020, six relatively fallow innings leaving them with averages of just 8.00 and 7.33. Wyatt in particular can be an immensely exciting batter, and is certainly capable of taking down the best attacks in the world, but both her and Jones seem poorly placed to get England off to a flyer.

The No.3 for England in all-formats is the statuesque all-rounder Natalie Sciver. An elegant batter, Sciver has been arriving at the crease far earlier than would be ideal given the struggles of the opening pair, but her personal success has kept England relatively secure - her wicket is crucial. As such, Windies should look to target her with spin. In the last year, Sciver averages a frightening 80.50 against seamers in this form of the game, scoring at just under 7rpo. Against spin, it's a different story. An average of 18.63 - including 11 of her 13 dismissals - is reflective of the fact she is far less comfortable with pace taken off the ball. Taylor should be aggressive against her, and bring her slower bowlers into the game earlier than she may do typically. 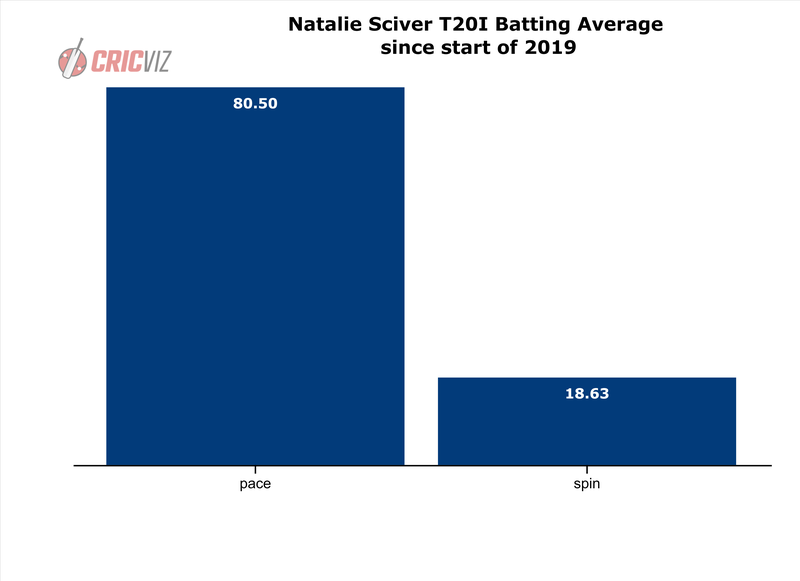 When it comes to their turn to bat, there are some key patterns that the West Indies women should be across. The first, and perhaps the most important, is the way in which England's opening bowlers work as a pair. Anya Shrubsole and Katherine Brunt are both skilled enough to be able to consistently swing the white ball, but they tend to do so in very predictable ways. In the last year, 73% of Shrubsole's bowling has swung from left-to-right, i.e. into the right-handed batter. For Brunt, that figure is just 7%, with the overwhelming majority of her deliveries swinging from right-to-left, i.e. moving away from the right-hander. Of course, playing these deliveries is one thing, but recognising that both bowlers have such clear methods does at the very least mean they know what they're up against. They should also not be afraid to attack Shrubsole in particular - in the last year, attacking shots against her have scored at 10.9rpo, comfortably the most for any England bowler. Partly, that is a consequence of her bowling in the Powerplay when the field is up, but given she'll play that role on Sunday, the Windies should certainly look to be aggressive against her.

Later in the innings, there is another potential weak point in the England attack. Sarah Glenn, the young leg-spinner who's burst into the first XI, is a talented bowler - but compared to many female leg break bowlers, she doesn't spin the ball hugely. Her average delivery in this World Cup so far has spun just 1.4 degrees, and her average speed is 77kph, the quickest for any leg spinner in the competition. When you compare that to slower, loopier bowlers like Poonam Yadav - who spins it 3.5 degrees on average in this tournament - Glenn poses a rather different threat to what we often see in the women's game. It's important to player her accordingly.

All in all, England are a serious side who pose a genuine threat to West Indies' progression in the competition, but it is not a lost cause by any stretch of the imagination. Being across the specifics in England's strategy will put them in a strong position ahead of the match - and that's all you can really ask.