CricViz Analysis: The 2019 CPL in Numbers

CricViz analyst Freddie Wilde examines some of the key talking points from the 2019 CPL.

The 2019 CPL may have ended up in the hands of the Barbados Tridents but it will be remembered, perhaps more than anything else, for Guyana Amazon Warriors winning streak of eleven consecutive matches before they were turned over in the final. Guyana’s eleven wins in a row is the fourth longest winning streak in major T20 leagues behind Kolkata Knight Riders’ 14 in a row across the 2014 Indian Premier League and Champions League T20, Sydney Sixers’ 12 in a row across the 2012/13 Big Bash League and Champions League T20 and Surrey’s 13 in a row in the Twenty20 Cup in 2003 and 2004. The Amazon Warriors have now finished runners up in the CPL five times - no other team in any major T20 league have lost as many finals as Guyana. 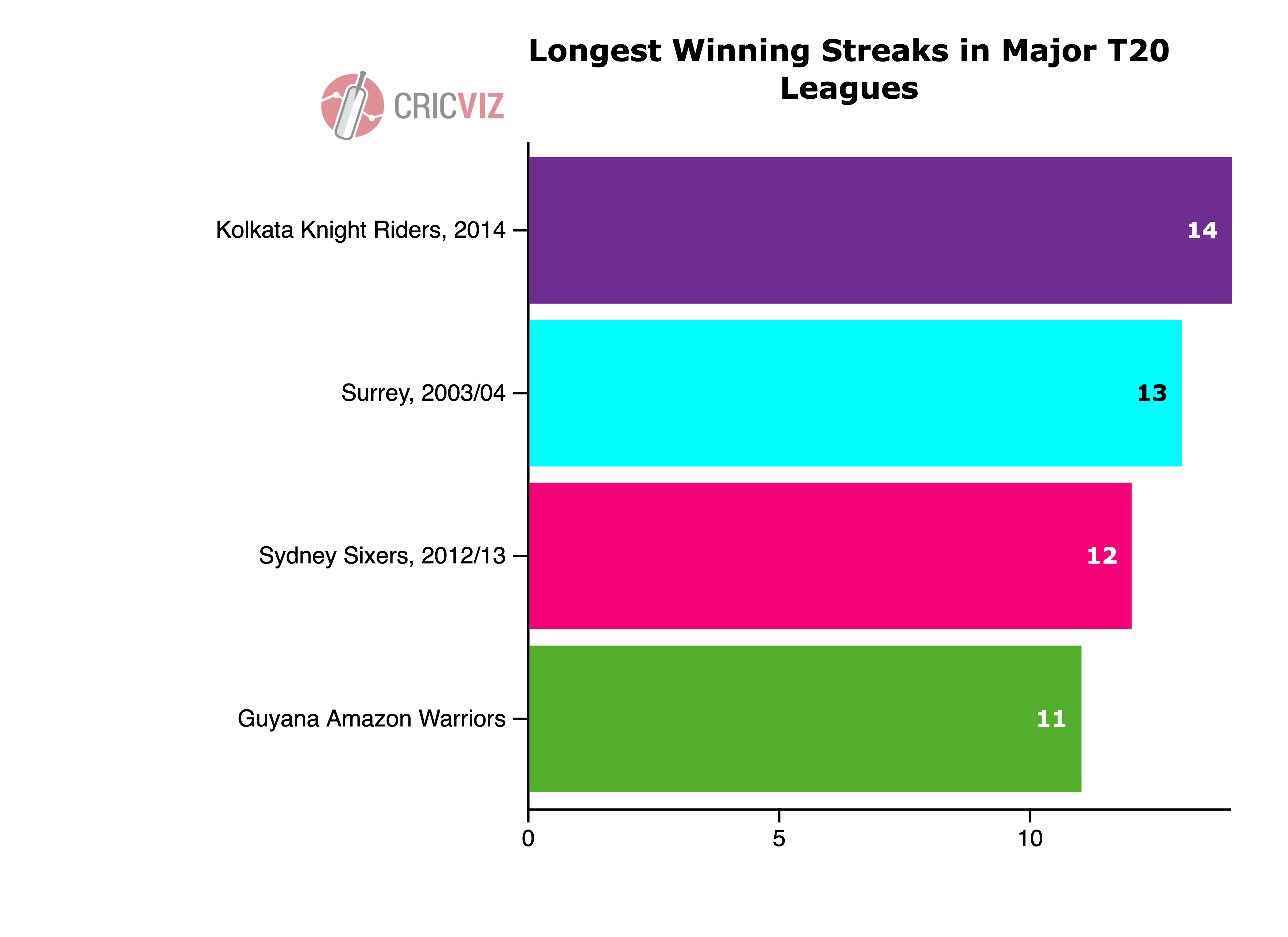 Central to the success of Guyana was their heavy emphasis on spin bowling. Across the season 57% of their overs were bowled by spinners - comfortably the highest proportion of any team in the competition. Their spin attack was led by the duo of Chris Green—operating largely the in the Powerplay—and Imran Tahir—operating largely through the middle, and supported by Chanderpaul Hemraj, Shoaib Malik and for three matches each, Shadab Khan and Qais Ahmed. 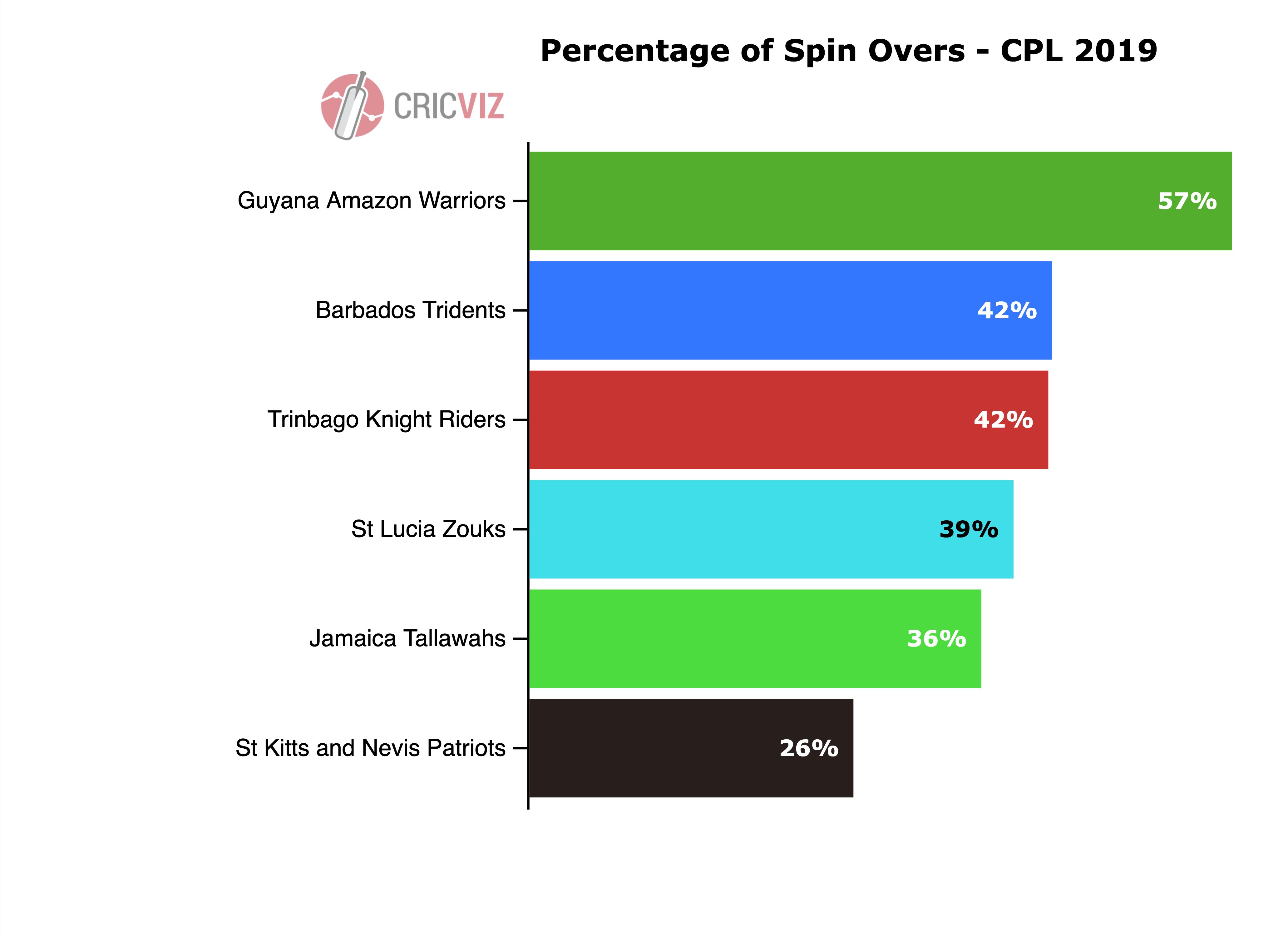 Guyana’s focus on spin bowling was no coincidence. Their home venue - the Providence Stadium - is notorious for producing slow, low pitches on which run scoring is particularly difficult. The Amazon Warriors built their squad around these conditions, piling in on high quality spin bowlers at the Draft. Their focus on spin was rewarded - no team’s spinners recorded better statistics than theirs with a True Economy Rate of 1.52 runs per over below expectation being the most telling example of their dominance. 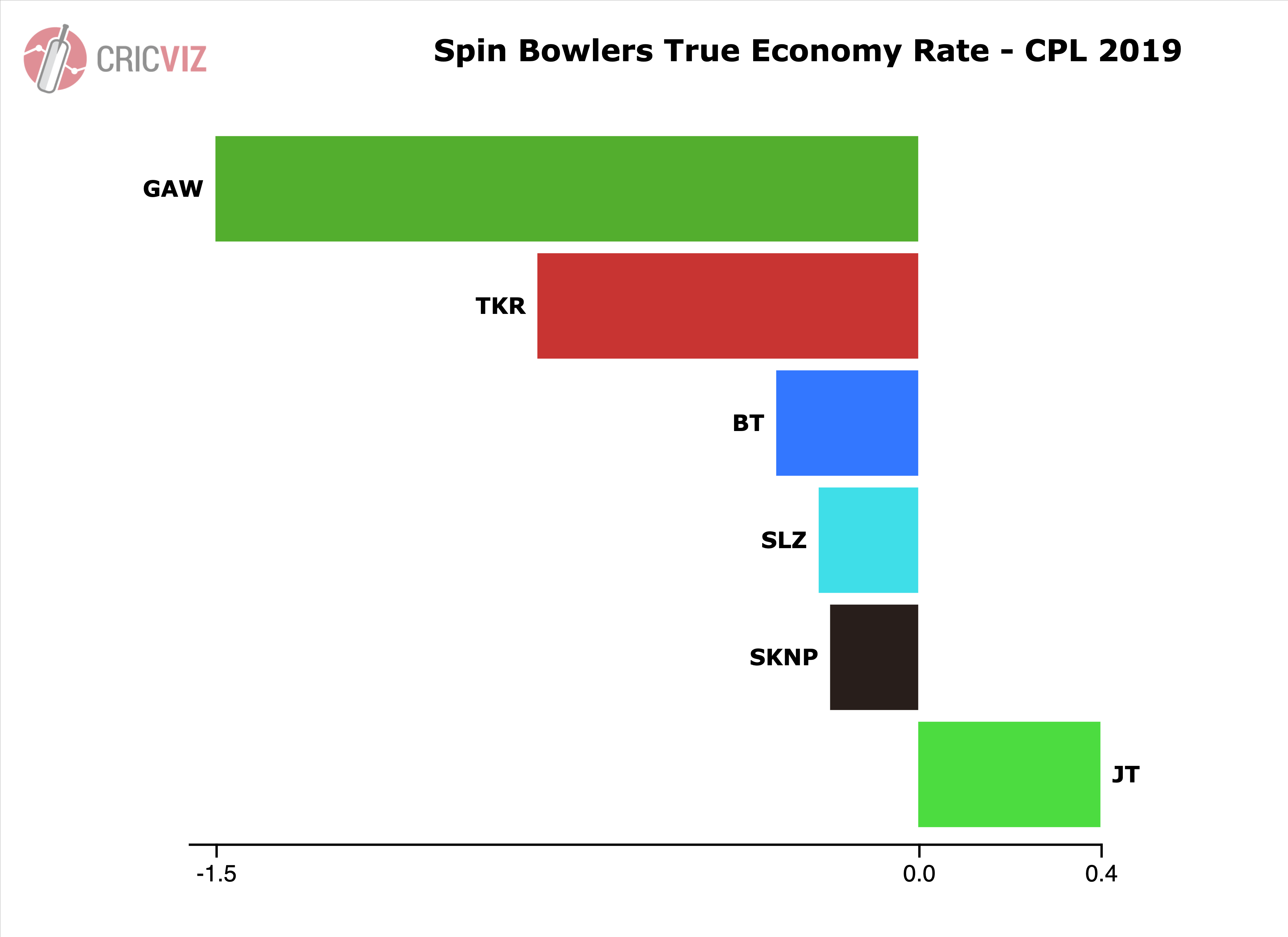 This was a breakout tournament for the 24 year-old Jamaican Brandon King who finished as the tournament’s leading run-scorer with 496 runs for the Amazon Warriors, including a stunning century in Qualifier 1 - the highest CPL score ever.

Ahead of the season Guyana’s powerful middle order of Shimron Hetmyer, Nicholas Pooran, Shoaib Malik and Sherfane Rutherford was identified as a key strength of the side while their opening partnership appeared to be a weakness with the opening pairing itself not even clear. King’s superb season transformed Guyana from a good team into an arguably great one. King’s run tally was plundered at a superb rate of 8.93 runs per over with him managing the rare—and valuable feat—of scoring faster against spin—9.53 runs per over, compared to against pace—8.47 runs per over. 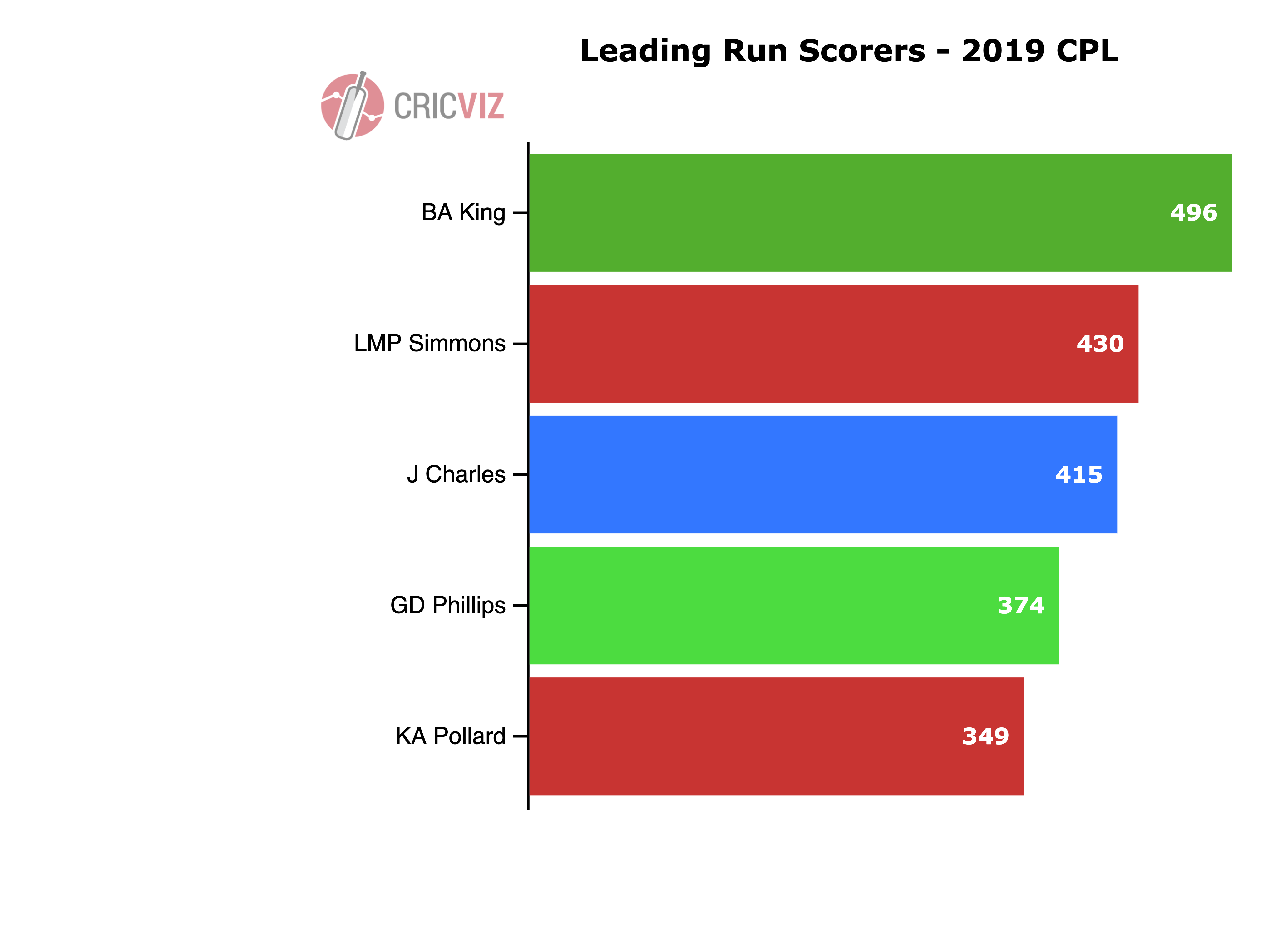 This was a significant tournament not only for the leading run-scorer - King, but also the leading wicket-taker - Hayden Walsh Jr. The 27 year old USA leg spinner took 22 wickets in the tournament for the Barbados Tridents - six clear of the second best. Walsh was picked as an Americas player for the Tridents but has since expressed his interest in playing for the West Indies. While the West Indies have produced many great T20 players they haven’t yet had an attacking leg spinner - with Samuel Badree’s defensive sliders not quite the same thing. Walsh’s emergence could soon change things. 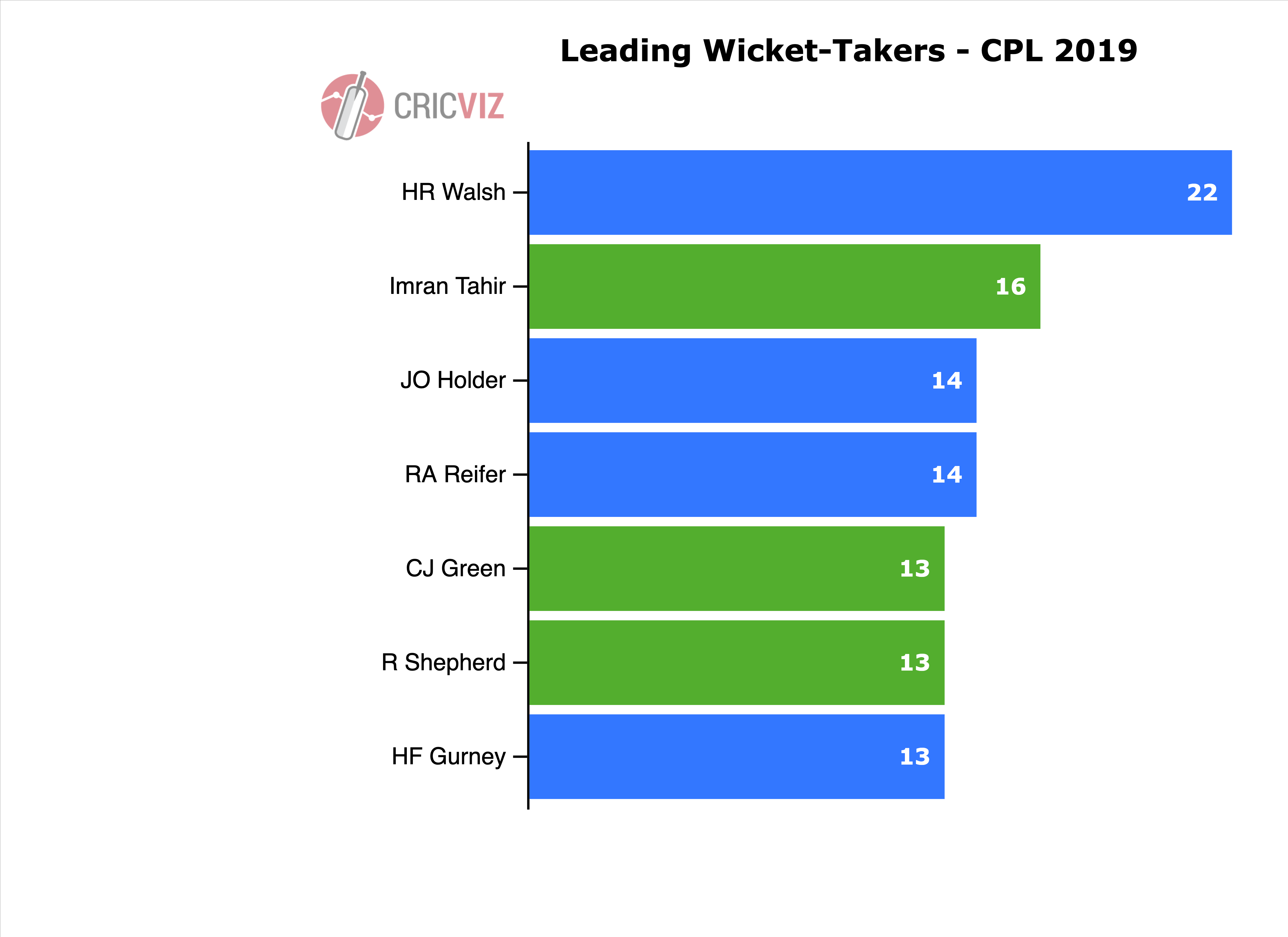 The Barbados Tridents’ campaign was transformed when they signed the left-arm death bowler Harry Gurney. Before he arrived the Tridents had won two of their five matches but after he linked up with the team they won five of their remaining eight matches. Gurney’s performances for the Tridents were nothing short of spectacular - across the season he bowled 31 overs and returned an economy rate of just 6.16 runs per over - a phenomenal -2.44 runs per over below expectation based on the overs he bowled, which were primarily the difficult death overs when run rates are typically at their highest. In the last 12 months Gurney has been involved in title winning campaigns with the Northern Warriors in the T10 League, the Melbourne Renegades in the BBL, the Quetta Gladiators in the PSL and now the Tridents in the CPL. Gurney’s True Economy Rate of -2.44 was the second best of any bowler in the competition, only behind the legendary Sunil Narine. 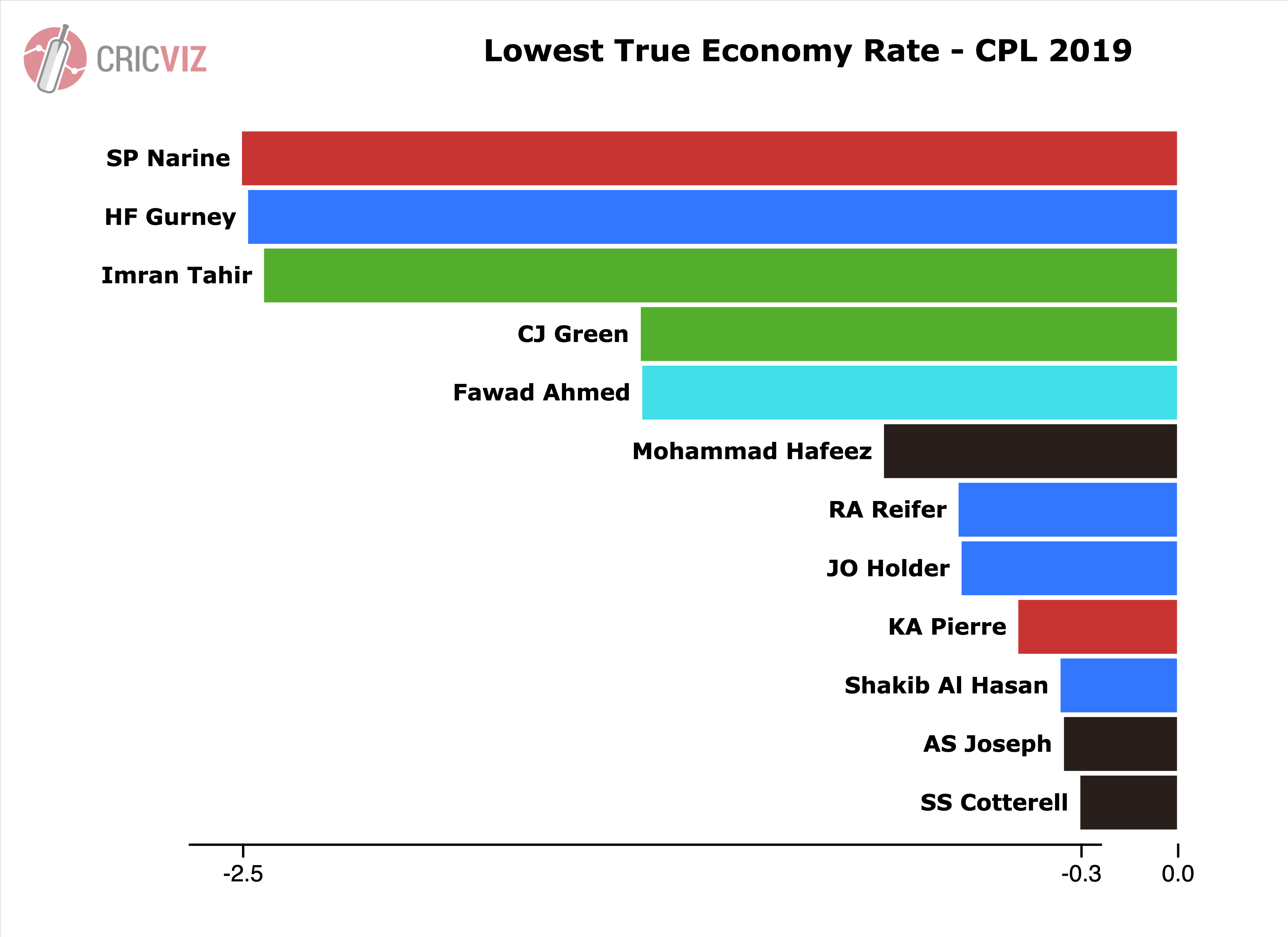 The overall run rate in the 2019 CPL of 8.30 runs per over was slightly down on last year’s historic high of 8.54 runs per over, but was still the second fastest scoring edition of a tournament where pitches have improved in recent years and seen scoring rates rise as a result. Most notably teams were particularly effective at exploiting the Powerplay this year - the run rate in the first overs of 8.04 was the highest in the CPL’s history. 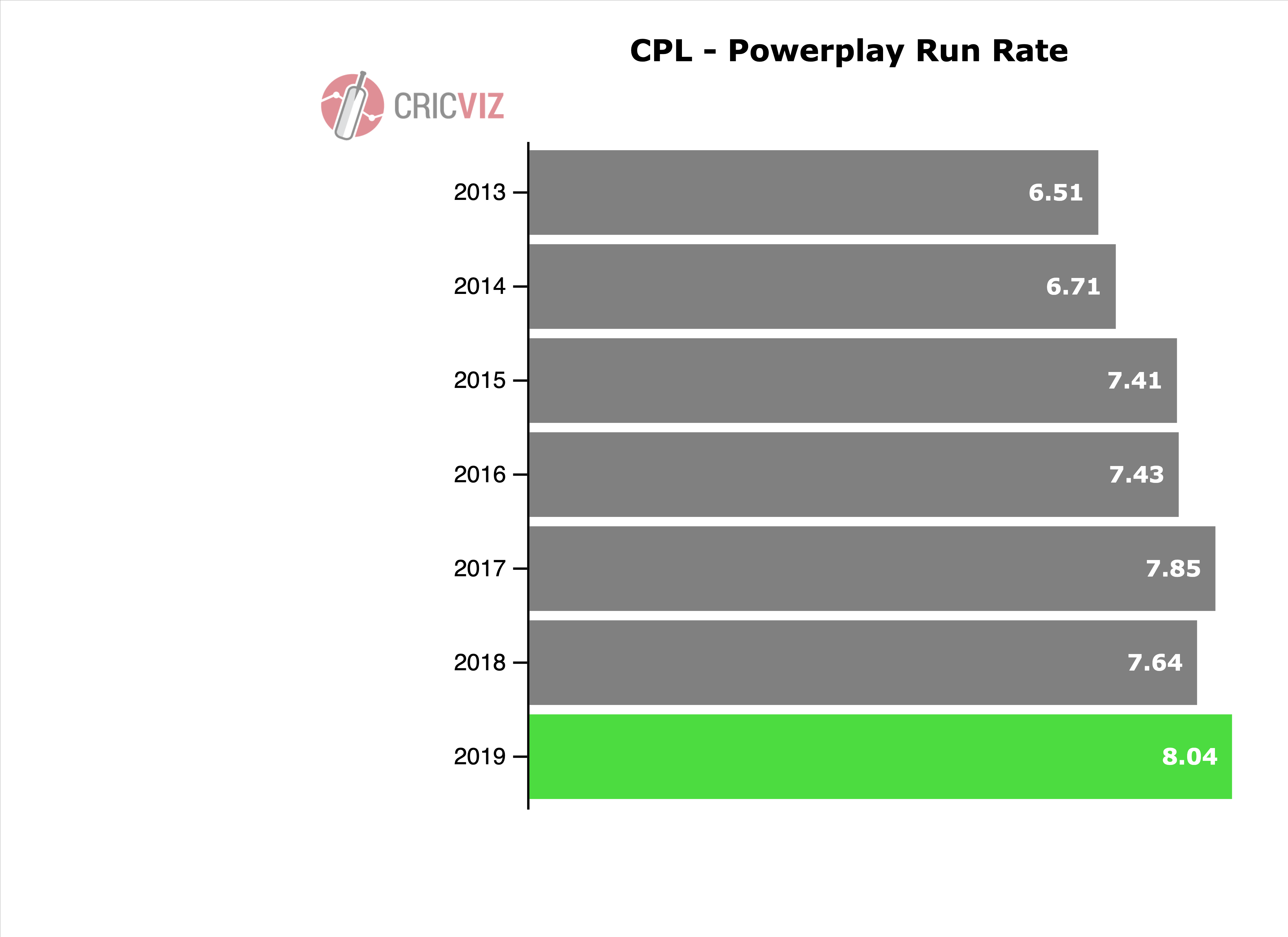 Freddie Wilde is a CricViz analyst.