ST JOHN’S, Antigua – Cricket icons Sir Vivian Richards and Lord Ian Botham unveiled the new Richards-Botham trophy which will be won by the victors in Test Series between West Indies and England Men’s Team. The trophy pays tribute to two all-time greats – whose rivalry and friendship embodies the close relationship and mutual respect between the two sides. The unveiling ceremony was held on Sunday at the Sir Vivian Richards Stadium in Antigua ahead of the first Apex Test match which starts on Tuesday, March 8. 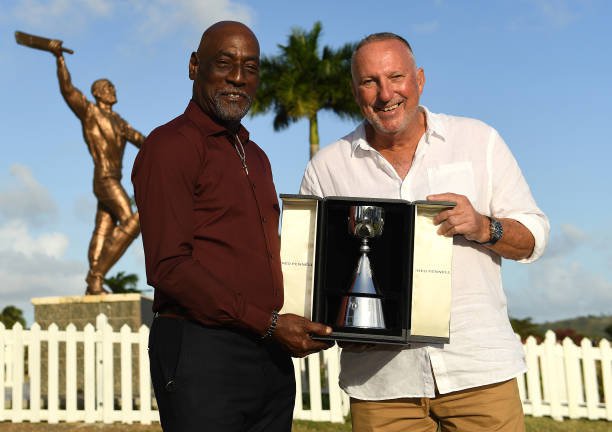 The sparkling new trophy symbolizes “Courage. Friendship. Respect” – values that represent the Test cricketing rivalry between West Indies and England, and of two legends who best define them – Sir Vivian Richards and Lord Ian Botham. It has an ultra-modern design and consists of an upside-down cup, based on a Georgian rummer, with the joining sphere a cricket ball. One end is a rummer for drinking rum and the other a wine/ale goblet. The rummer has palm fronds and the ale cup has willow leaves. The ceremonial idea is that the winning team holding the trophy would have the rummer that represents their team face upward while they held it and it would be ceremoniously turned over when the other team wins.

Test matches between these two rivals dates back to 1928 when West Indies made their first trip to England. The teams, under captaincy of Kraigg Brathwaite and Joe Root, will renew the rivalry with the Apex Test Series.

“It’s a truly special feeling to have the fantastic trophy named in honor of my great friend Ian and myself. We played a lot together and built a great friendship on and off the cricket field. As I said earlier, I am truly delighted to know that the game that I have shown my love for all my life is naming such a prestigious award in recognition of what I managed to achieve. It’s a beautiful trophy and I want to again thank everyone who came up with this idea and contributed to its creation." 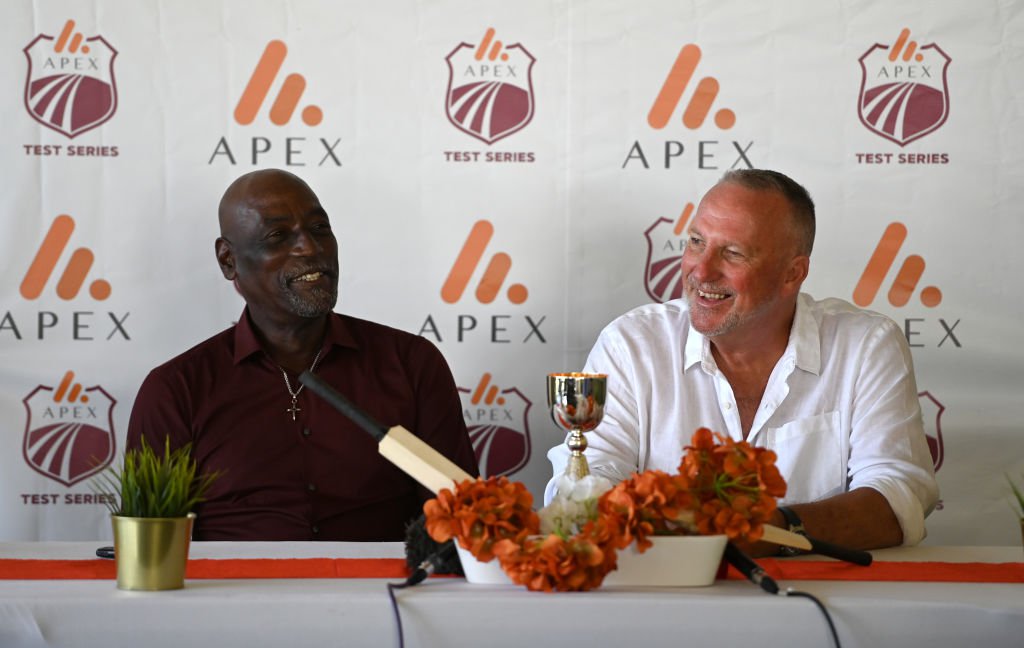 “It’s a great idea and a truly lovely trophy. It really stands out and I’m honored to have my name on the trophy alongside my friend Sir Viv. The captain who picks up the trophy at the end of the upcoming series will be a happy man.”

“We’re really excited and ready for the upcoming Apex Test Series against England. This is going to be an amazing three weeks of cricket. It’s extra special too that we’re playing for the new Richards-Botham trophy, a fitting tribute to these two great men. We want to be the first team to get our hands on it and celebrate with our fans.”

“Test series between England and West Indies are iconic, and to have a trophy named after arguably the two most outstanding England and West Indies cricketers of all-time in Lord Ian Botham and Sir Vivian Richards is a fitting tribute for this great rivalry. We are enthused about the next month of competition, and we hope to make the England fans proud by lifting the Richards-Botham trophy.”

The Apex Test Series will feature three Test matches. The first at the Sir Vivian Richards Stadium, the second Apex Test will be played at Kensington Oval, Barbados from March 16-20, with the climax in the third Apex Test at the Grenada National Stadium, Grenada on March 24-28.