Off-spinner Rahkeem Cornwall took a five-wicket haul and Nkrumah Bonner and John Campbell struck half-centuries, as West Indies dominated the second day of their three-day warm-up match against the Bangladesh Cricket Board XI on Saturday.

Cornwall finished with 5-47 as the hosts, resuming from their overnight 24-0, were bowled out for 160, about an hour after lunch at the M.A. Aziz Stadium in Chattogram.

Left-arm spinner Jomel Warrican also claimed 3-25 as the spinners bowled in tandem well on a pitch which offered turn and bounce.

With a lead of 97, West Indies finished the day on 179-5 in their second innings, thanks to a stroke-filled, unbeaten 80 with 12 fours from Bonner and Campbell’s 68, which included nine fours off 98 balls.

Cruising at 130-1 at one stage courtesy of a second-wicket stand of 129 between Bonner and Campbell, West Indies then lost three quick wickets for 14 runs in the space of 31 balls. 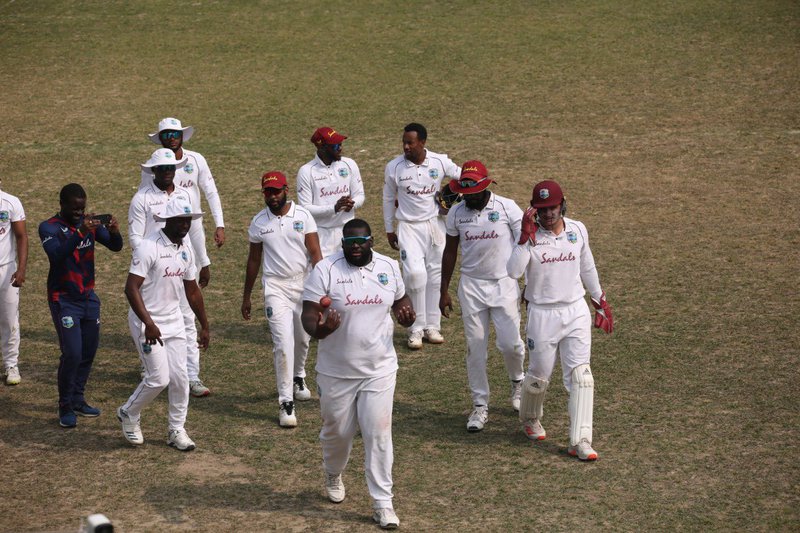 They enter Sunday’s final day with an overall lead of 276 runs, as they prepare for the start of the opening Test on Wednesday.

Bonner, who reached his half-century in the third over after tea, combined with Kavem Hodge (19) in a 33-run, fifth wicket partnership to temporarily halt the slide.

But with the close beckoning, West Indies relinquished some of their advantage when Hodge perished to an lbw decision off 20-year-old seamer Mukidul Islam in the day’s penultimate over.