CAVE HILL, Barbados –Keacy Carty’s outlook for his cricket career could be rooted in The Golden Rule of Maturity – “When I was a child, I spoke as a child, I understood as a child, I thought as a child: but when I became a man, I put away childish things”.

This biblical verse came to mind, as he responded to a question about how he was managing his transition from WINDIES Under-19 World Cup hero to Leeward Islands Hurricanes opener, looking to stake a claim for a place in the senior WINDIES team.

Carty collected his second first-class hundred to set the foundation for a 34-run victory for the Hurricanes over Barbados Pride in the first round of matches which ended last Sunday in the West Indies Championship.

He was named Player-of-the-Match, after he marked the start of the new season in style with a resolute 114 on the opening day of the day/night contest against the Pride at the Three Ws Oval here. 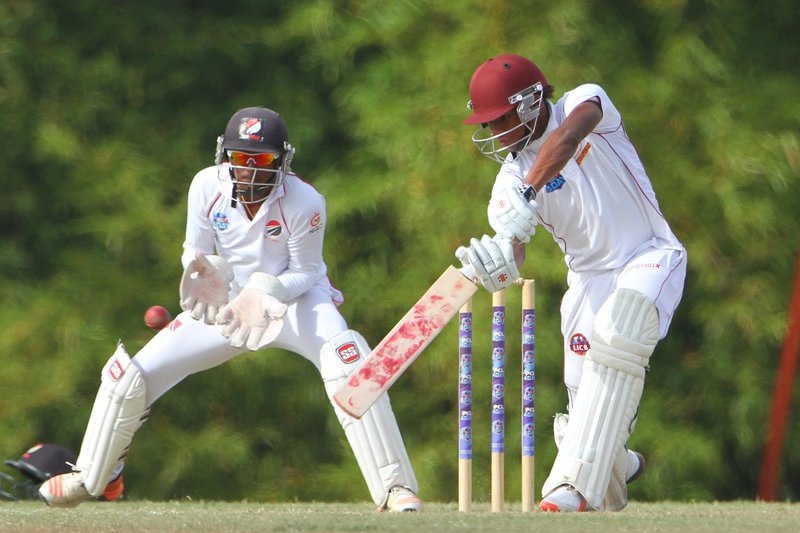 Carty shot to prominence at the 2016 ICC Youth World Cup in Bangladesh, when he stroked a stylish half-century in the Final to anchor the WINDIES Under-19s to their first title, an innings that similarly earned him the Player-of-the-Match award.

“Every day, I try to get better and better,” he told CWI Media. “I consider that Under-19 experience history. I don’t think about it anymore.

“It was a good performance, but I am trying now to make the senior WINDIES team, so what I do from here onwards is what really matters.”

The 21-year-old Carty hails from the Dutch island of St. Maarten, where there is not a huge cricket culture, but he said that the CWI Professional Cricket League set-up for the Hurricanes in St. Kitts has been of great benefit to him in maturing and setting his sights on senior colours.

“In the off-season, we have to come back to St. Kitts to train with the franchise team,” he said. “You may get two months off and you return to start training for the season, so I am currently based in St. Kitts with the rest of the players and that’s where I have been doing most of my training.

“Coming into the Hurricanes set up, playing alongside people like Alzarri Joseph, who I have been around since Under-17s and I know what he is capable of doing, Rahkeem Cornwall, Devon Thomas, Montcin Hodge and all of the guys, it’s just been about asking a lot of questions of the senior players and the support staff, and trying to get experience to elevate your game as quickly as possible.”

During last weekend’s Championship contest, Carty defied a blow to the helmet to lead a revival of the Hurricanes, after they chose to bat and slumped to 65 for four in their first innings.

Hurricanes recovered to reach 252, gaining a narrow first innings lead of four, but they were bowled out for just 165 in their second innings, leaving the Pride to chase 170 for victory.

Off-spinner Terrance Warde and WINDIES fast bowler Alzarri Joseph responded to the challenge, sharing seven wickets to bowl the Hurricanes to an unlikely victory, their second straight against this opponent in the corresponding fixture.

On the hundred: “I am very happy to start the season this way, but I am also happy that the Hurricanes got off to a good start with a win against the Pride. Hopefully, we can carry this good form into the next match against the Guyana Jaguars and into the break for the Christmas/New Year’s holidays, recuperate and get back at it again in January.”

On Hurricanes winning: “It was an all-round team performance. There was not one player that made the team, it was everybody – the batsmen, the bowlers, the fielders, the captaincy, the coaching, the management staff.”

On the team’s batting: “The bowlers have always been doing the job for the team. It’s now time for the batsmen to step up and we should be good from there. Most of the games we have won, the bowlers normally win for us. We have to hand it to them, so the batters will just have to step up.”

On the conditions during the match: “It was kind of difficult to pick up the ball at night, but once you are settled, you get your feet moving, it became easier to negotiate.”

On personal goals for the season: “I am trying to maintain an average of 40 or above throughout the season and challenge myself to get two or three hundreds. I have started with one, so I will be pushing hard to get at least two more for the season.”