Superstar all-rounder Dwayne Bravo played last match for the West Indies on Saturday as the two-time champions played their final match of the tournament. Bravo, a hero of the triumphs of 2012 and 2016 ICC T20 World Cups, made 10 runs and went wicketless in his 295th match for West Indies as the Aussies won by eight wickets. It was the West Indies fourth defeat of the Super 12 stage of the marquee event and therefore will not qualify for the semi-finals. They had one win against Bangladesh at the Sharjah Stadium.

Asked to bat first, the West Indies did well to reach 157-7, led by captain Kieron Pollard with a powerful 44 off 31 balls, while Andre Russell provided an explosive finish. Pollard hit four fours and a six as he launched a rousing second half to the innings. Russell added some muscle at the end with two massive sixes off the last two balls. He closed on 18 not out off just seven balls.

West Indies started well but slipped to 35-3 in the fourth over. Chris Gayle, who like Bravo was crucial to the two World titles in this format, was out for 15, which included two sixes. After his dismissal Gayle signalled it would be his final innings at a global tournament. As he left the playing arena, the charismatic Gayle raised his bat and both hands, hugged Bravo and received applause from team-mates and fans in the stands. 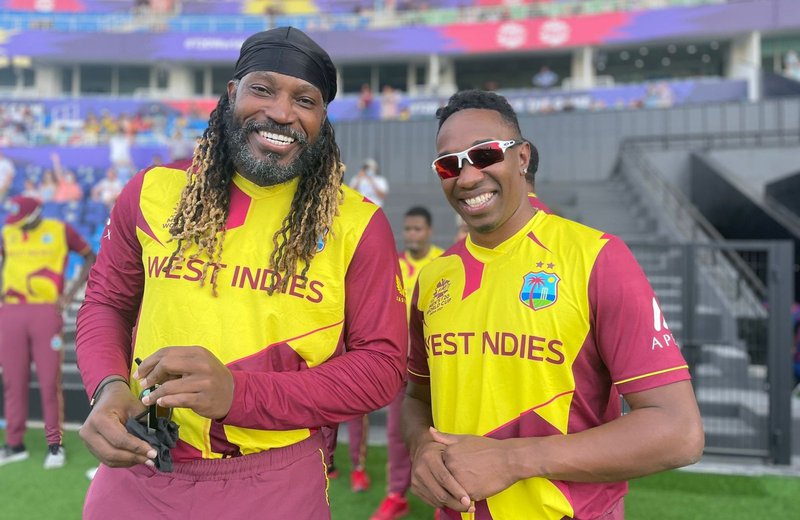 New ball bowler Josh Hazlewood was the most successful for Australia with 4-39 off four overs, while leg-spinner Adam Zampa was economical with 1-20, also in four overs.

Australia replied with 161-2 in 16.2 overs. David Warner made 89 not out to lead his team to victory. His 56-ball innings included nine fours and four sixes while Mitchell Marsh hit 53 off 32 balls. Gayle left a final mark on the match when he claimed the wicket of Marsh to end with 1-7 from his single over. The charismatic Gayle celebrated by hugging Marsh as they shared a light-hearted, “spirit of cricket” moment.

After the match both teams gave a guard of honour to Bravo, who served West Indies cricket for close to two decades, since his international debut against England in Guyana in April, 2004. There were also cheers from the spectators in the crowd, a show of appreciation for his stellar career and the way he revolutionized the T20 format. Bravo’s career statistics for West Indies are outstanding. He played 91 T20 Internationals, taking 78 wickets and scored 1,255 runs. He has also played 40 Tests and scored 2,200 runs – with three centuries and took 86 wickets. In 164 One-Day International appearances he made 2,968 runs and took 199 wickets.

Speaking after play the talismanic all-rounder signed off: “Being around the international circuit to represent my country for, let’s say, 18 years – 18 years, I’m very grateful to represent the West Indies for so long. There are some strong friendships with great people and some great players, and I’m very lucky to be playing this game.”

A dream come true and a career of passion.👏🏿 #T20WorldCup #MissionMaroon pic.twitter.com/rxBbQCm6Fi