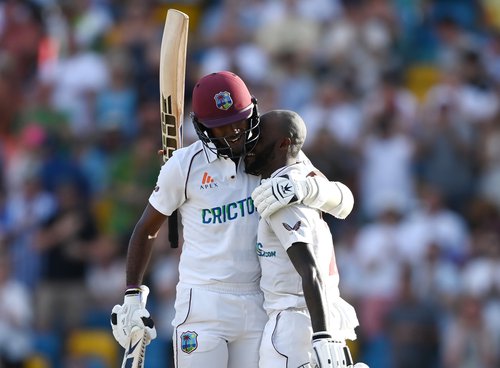 Captain Kraigg Brathwaite and vice captain Jermaine Blackwood both made excellent hundreds as West Indies left their mark on the third of this enthralling Test with an exceptional batting effort on Friday. The 29-year-old Brathwaite crafted an unbeaten 109 – his tenth Test hundred – while the 30-year-Blackwood unfurled an equally outstanding 102 – his third Test century – as West Indies marched to the close on 288-4, in reply to England’s massive first innings of 507-9 declared.

West Indies still trail by 219 runs heading into Saturday’s fourth day, they are now within 20 runs of avoiding the follow-on, leaving the contest an open affair going into the decisive stages at the historic venue.

Resuming the morning on 71-1, West Indies lost Shamarh Brooks after he added just eight to his overnight 31 and Nkrumah Bonner fell for nine, reducing the home side to 101-3, 45 minutes before lunch. However Brathwaite and Blackwood combined in a 183-run fourth wicket partnership ensuring West Indies dominated the next two session.

Unflappable and solid in defence, Brathwaite has so far faced 337 balls in just short of 8-¼ hours at the crease and counting a 12 fours, in his first Test hundred in his homeland with his parents watching.

An off the mark boundary from blackwood before lunch! #WIvENG pic.twitter.com/qIKY1BNyxU

Blackwood complemented his skipper and struck 11 fours off 215 balls in just under five hours, before finally succumbing half-hour before the close to a rare misjudgment and falling leg-before wicket to off-spinner Dan Lawrence.

“This one means a lot. Obviously I’ve never scored a Test hundred at home,” Brathwaite said afterwards. “My mother was here and she’s never watched me play a game before, and my father and all my aunts were here so it was amazing The time spent at the crease, I was very happy with that. Obviously England got a big score so I think batting the whole day was crucial for us.” Blackwood said he had his sights on something big ahead of this contest. “It was very special. The last time I played England here I scored 85 and 46 not out so this is a very special innings for me,” he said. “The last game I didn’t score any runs so I told myself this game I’m really going to settle down and bat some balls.”

The match continues on Saturday at 10am (9am Jamaica Time).