The CPL has seen numerous special knocks. So far there have been sixteen hundreds and 286 fifty-plus scores. Traditionally, the top knocks are all classified as the highest individual scores which makes the 132* off 72 balls by Brandon King in the CPL 2019 – the best knock of the competition by this measure. Top order batsmen and especially, openers, have the best chance to post these scores considering the number of overs they have at their disposal. What if we could classify the best innings in a different manner? At CricViz we have a model - Match Impact, that looks at more than just the volume of runs but looks at the specific context within which they are played to determine the best innings. Here are the top five innings in the history of the CPL based on Match Impact.

CricViz’s Batting Impact measure calculates how many runs more than the average player any given batsman contributes. It’s an alternative to scoring rate or average and it takes into account the game situation, and gives a better indicator of the actual value of a player’s innings. Performances are measured ball-by-ball using a model which prescribes a positive or negative run value based on whether the actions of the batsman have increased or decreased the expected total.

One of T20 cricket’s biggest stars - the Universe Boss and the talisman of T20 cricket in the Caribbean: Chris Gayle. The Jamaican was in belligerent form in 2015 – in the CPL and in T20s in general. On such a day in the CPL, the big left-hander unleashed his brute power against TKR (then Red Steel) with 105 runs in 57 balls. Gayle scored 47 runs in 22 balls in the powerplay, 62 runs in first 30 balls – all signs of his peak hitting in 2015. The Tallawahs ended up scoring 180 with almost 60% of the runs coming from Gayle. Gayle’s impact for this innings was +51.9 – a typical Gaylestorm - putting him at number five among all the innings in the competition. 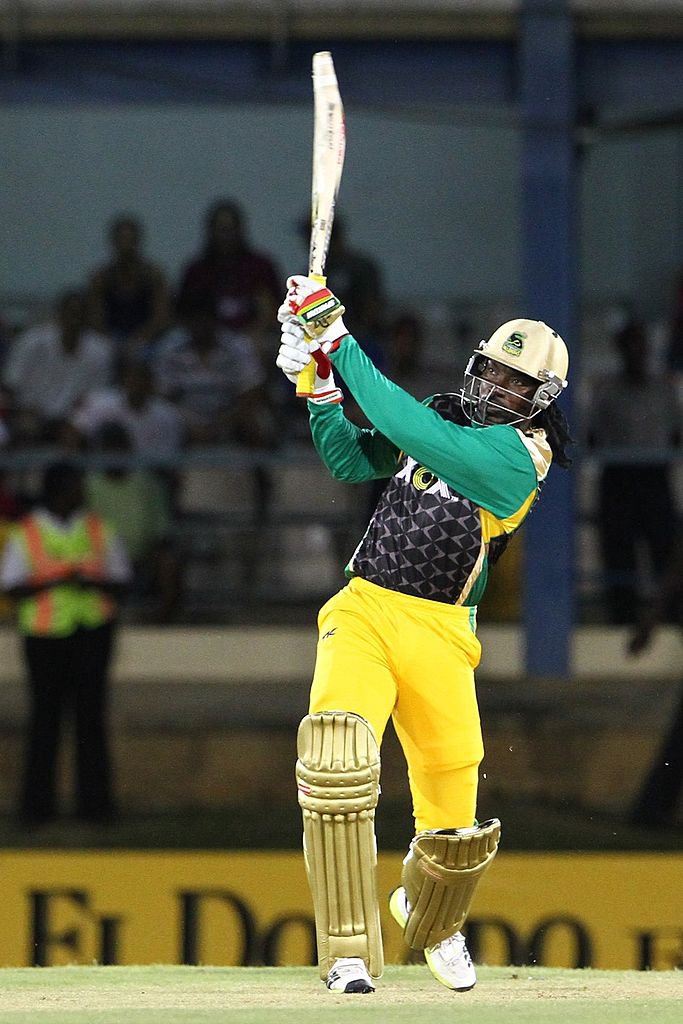 Shoaib Malik is one of the most underrated players in T20. He is the fourth highest scorer in T20 history and the highest overseas run scorer in the CPL. Malik’s highest score in the CPL – 81* was a great knock but in vain as the Tridents lost to Tallawahs looking to chase down the target of 148 but ended up with only 128. Malik walked in with the score at 11 for 2 and scored 81 of the remaining 119 runs with almost no support from the other end. The Pakistani stalwart scored 81 off 43 balls (at a strike rate of 188.4) while the rest of the team put together scored 47 runs off 77 balls (at a strike rate of 61). It was this context - a superb individual performance alongside a terrible team one and in a low scoring game - that earned Malik +52.5 runs of impact. 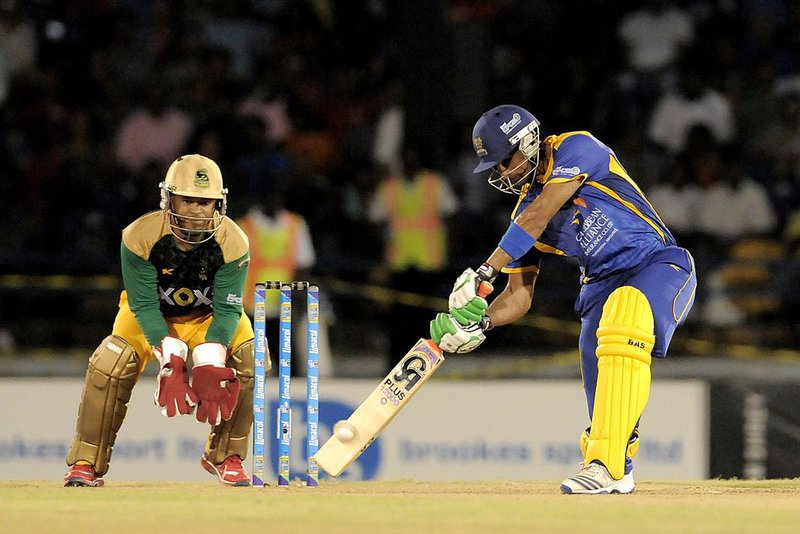 Like we mentioned earlier, 2015 was Gayle’s year in the CPL. He finished as the highest run scorer in the competition that year with 430 runs. Across all CPL seasons, only once has a player scored more runs in a year compared to Gayle’s 430 in 2015 – that was Lendl Simmons with 446 in 2014. The big Jamaican came up with a crazy knock scoring an unbeaten 90 facing a meagre 36 balls. Batting first, St Lucia struggled to get going after a decent opening stand of 39 in 34 balls, ending up with a below par 118 in their 20 overs. Gayle waltzed in the next innings, scored 90 runs off 36 balls at a strike rate of only 250, out of the Tallawah’s tally of 121 runs – that’s almost 75% of the team's runs. He scored 54 runs off 23 balls in the powerplay with 46 of those runs coming only in boundaries. The left-hander cleared the ropes in each over where he faced more than two balls in that over. The impact of this innings was +54.9 – Gayle is the only player to feature multiple times in the top five in our list – both coming in the 2015 edition. Gayle’s batting impact in CPL 2015 was +13.8 – the highest of all players to have played at least five innings in a season. 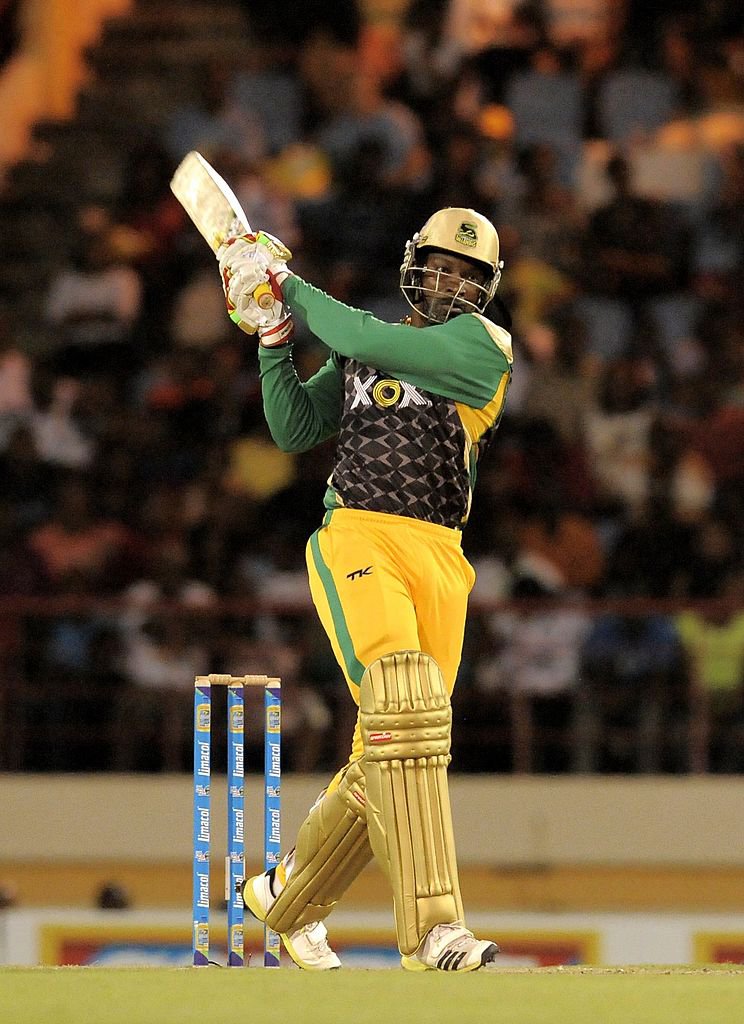 The Caribbean have produced a plethora of T20 batsmen – Evin Lewis is one of those stars. In terms of sheer volume of runs – since the start of 2015 – only Gayle, Pollard and Russell from the Caribbean have scored more runs than Lewis in the shortest format of the game. Lewis is one of the best T20 openers, and touted as the next Chris Gayle for his raw hitting prowess. In CPL 2017, on one such day, Lewis showed what makes him such a special player. Chasing a target of 129 set by the Barbados Tridents, St Kitts and Nevis Patriots reached the mark in seven overs scoring at an astounding 18.4 runs per over. The chief destructor behind that carnage was Evin Lewis, who was unbeaten on 97 facing only 32 balls. The left-hander scored 90 runs in boundaries (six 4s and eleven 6s) out of the 97. He faced 26 balls in the first six overs and scored 76 runs. In the history of T20s, only on two other occasions has a batsman scored more runs in the first six overs of a T20 innings. The pull shot, Lewis’ signature shot, fetched him 32 runs off only six shots - with fives sixes in the mix – the sign of the left-hander playing at his best. Another fact about this carnage makes this innings all the more special, while Lewis was teeing off, the man at the other end was none other than Gayle who only scored 22 runs off 14 balls. For all these reasons, this innings registered an impact score of +59.2 – putting it at number two in our list. 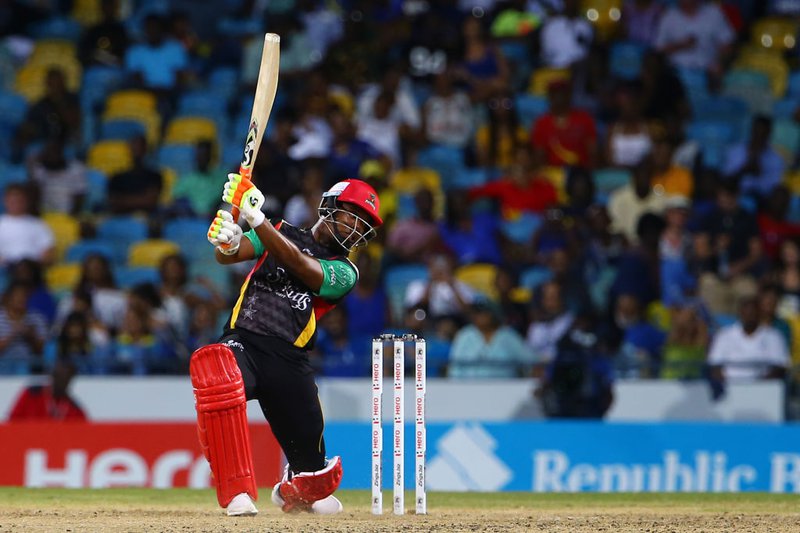 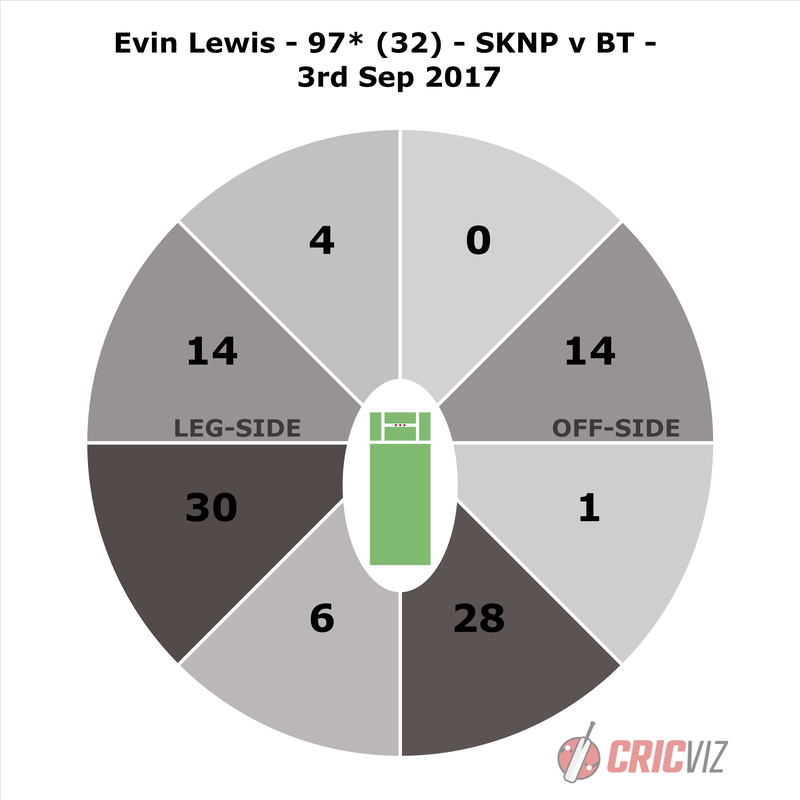 Under the lights at the Queen’s Park Oval in Port of Spain, Andre Russell produced one of the most special knocks in T20 history. Chasing TKR’s target of 224, Russell walked in to bat at number seven with the Tallawahs struggling at 41/5 after 6.1 overs. Even in the wildest imagination of the most optimistic Tallwahs fan, a win from that situation would’ve seemed impossible, to put it mildly. With 183 runs needed with 83 balls and only five wickets remaining – Russell unleashed in a way only he can, scoring 121 of those runs in 49 balls, in a knock that included six fours and thirteen sixes. All thirteen sixes came in his arc scoring towards mid-wicket, long on and long off and overall 100 off his 121 runs came in that region. The right-hander scored 40 runs off 13 balls against Dwayne Bravo & 35 runs off 14 balls Sunil Narine – that’s 75 runs off 27 balls against two of the best T20 bowlers. He reached his century in 40 balls – the fastest 100 in CPL history – the second fastest in T20 history batting at number six or lower – breaking records aplenty. The pressure of a high scoring run chase with half the team dismissed in 37 balls and successfully going to reach the target with three balls to spare makes this the most impactful innings in history of the CPL with a score of +71.8 – well ahead of Lewis’ knock in second place. In T20 history, Russell’s knock is the 12th highest in terms of impact score and considering all knocks batting at six or below Russell’s is top. In addition to his century Russell took a hattrick in the first innings – which makes it one of the best all-round performances in T20 history. 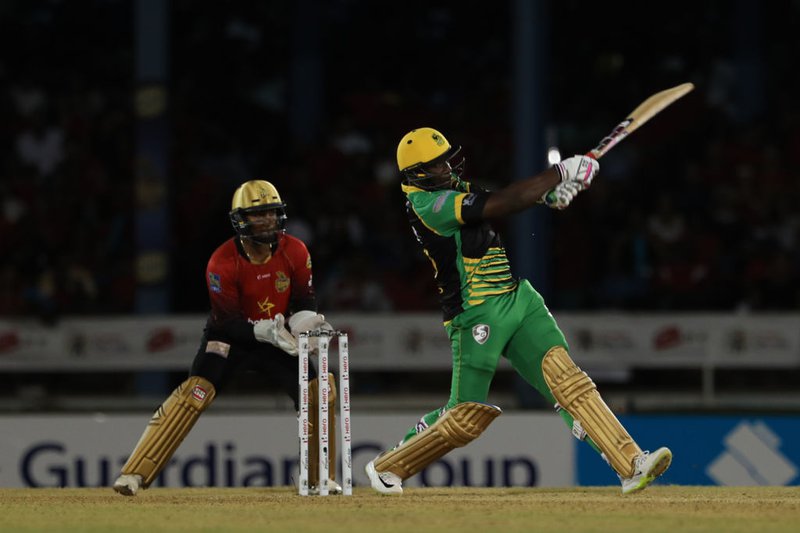 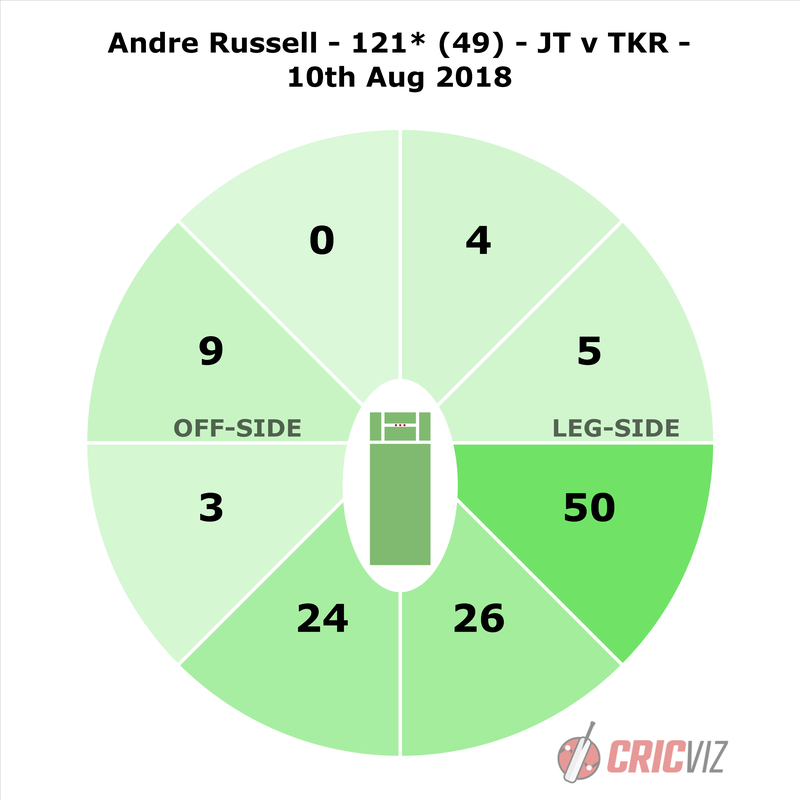 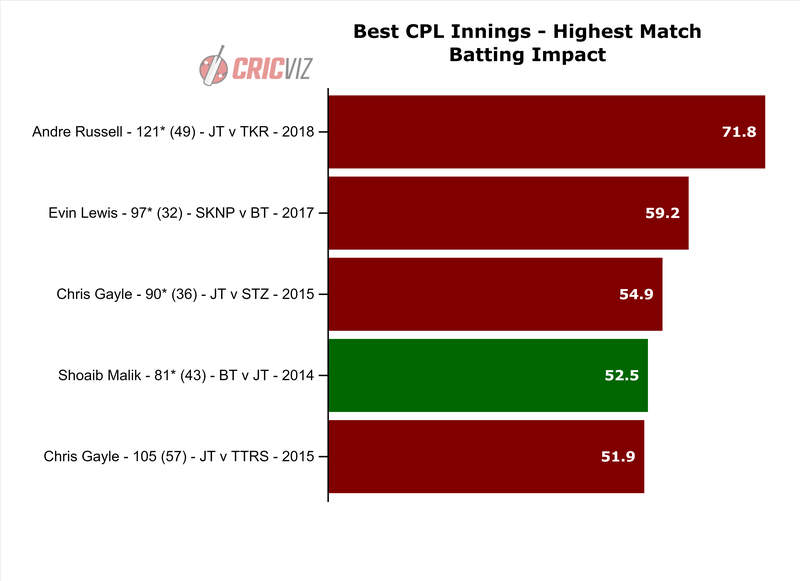