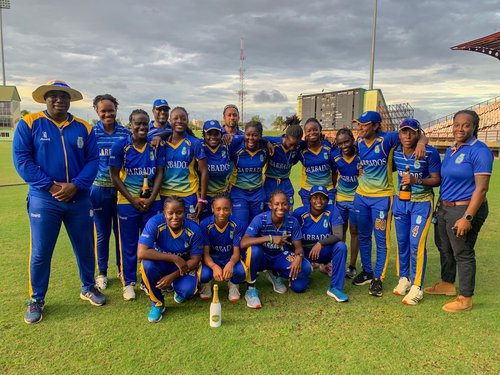 PROVIDENCE, Guyana – Barbados successfully defended their CG United Women’s Super50 Cup title as they romped to a sensational eight-wicket win over Jamaica (via the Duckworth/Lewis/Stern Method), in a rain-shortened 26-over per side match. The winners celebrated their third consecutive 50-over title in style, after they narrowly missed out on also taking the T20 Blaze title earlier this month.

It was the Bajan batting which took care of business on Saturday afternoon as they made light work of the target set by the Jamaicans. Once again, the opening pair got their team a solid start in their run-chase. Captain Hayley Matthews and experienced left-hander Kycia Knight added 56 for the first wicket in 11.4 overs. Matthews was the first to fall when she was bowled by Corrine Howell for 22, which came off 31 balls and included two fours.

Kyshona Knight joined her twin sister and the pair added 41 in nine overs to take the score to 97-2 and within sight of the victory. Jamaica’s best bowler Chinelle Henry was reintroduced into the attack as they searched for wickets and she struck almost immediately when she got Kyshona trapped LBW for 14, which came off 26 balls. But it was not enough as Kycia powered on the Bajan innings. She reached her second half-century for the tournament to finish on 60 not out off 75 balls, which included seven fours. With her was Aaliyah Alleyne on 12 from 10 balls, as Barbados reached their DLS target of 120 in 23.4 overs.

After the match, Matthews said;

“We were looking to defend both title but a bit disappointing we couldn’t defend the T20 Blaze but to be able to bounce back from that and be able to come out here and play really good cricket all tournament long, winning all our games and defend our fifty overs title means a lot and to Barbados as well.”

“With all the rain around we had to be mentally tough and get our math right. Myself and the twins Kycia and Kyshona Knight have been fantastic. One of the three of us have managed to bat through the innings almost every game which I think crucial to the totals we’ve been able to put up and it shows in the results.”

Earlier Jamaica won the toss and decided to bat but only a disciplined knock of 44 from skipper Stafanie Taylor and 19 from Natasha McLean held the innings together. McLean smashed a six over long-on on her way to a 23-ball 19. Taylor, looking for a quick single, was run out on the non-strikers end with the score at 115-7 in the last over. Jamaica ended on 118-8 in their allotted 26 overs as Matthews finished with 6-1-16-2 followed by Alleyne with 5-2-19-2.