Jediah Greaves is a young man from Barbados, who loves cricket. He’s a fan of all members of the West Indies team, top of the list is his hero is Jason Holder.

Earlier in the year, Jediah’s mother, Shanice Connell, asked him what he wanted for his birthday, and he made a list of 10 things. At the very top, was the opportunity to meet Holder. When his mother inquired as to the importance of each item, he made it clear to her that meeting the world-leading allrounder would make his entire birthday, even if it is the only thing he gets.

Jediah keeps track of Jason’s whereabouts and with the West Indies playing New Zealand in the CG United ODI Series in Barbados at the same time, he knew it was a possibility. With that in mind, Shanice went to work. She contacted two of her friends that she knew were familiar with Holder. They made contact with him and organised for Jediah and Shanice to go to the team hotel and meet him on the morning of Sunday, August 21 – the day of the third match against the Black Caps – and Jediah’s birthday.

“Sunday was the best day of my life! I felt fuzzy, I was waiting for that moment for a very long time and I’m glad it came through that day. What inspires me about Jason is his attitude towards the game and how fun of a person he is.” 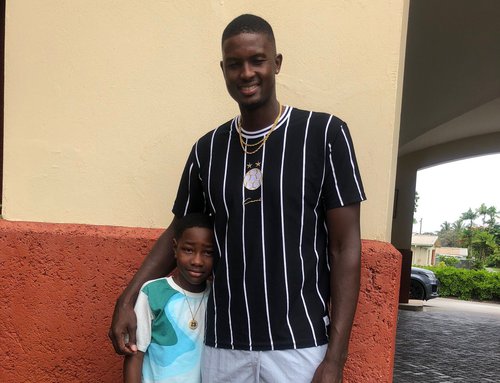 When Jediah saw Jason, who was hiding behind a wall initially, he was clearly overwhelmed. After backing away from the cricketer, Jason approached for an embrace, which brought the tears flowing from his eyes. The moment was just as special for Jason, who spends majority of the year traveling with the West Indies team and playing the sport he loves.

Jason mentioned that these are the types of experiences which help to keep professional athletes, particularly West Indian cricketers, grounded and connected to the Caribbean community. In a video he made, the gratitude was apparent, he said,

“I just want to say thank you Jediah, because you not only came and made my day, but you reminded me what it meant to be a fan. I think it’s so important from a players’ standpoint to understand that. It keeps you grounded and humble. So, I just want to express my gratitude and thanks to you.”

“I want to always encourage to reach for the stars, never limit yourself. Pursue your education just as hard as you pursue your cricket and work hard. Hard work never goes unnoticed, you will reap the benefits and rewards of hard work. Hopefully, we can meet up again in the not-too-distant future.”

Speaking to all the other Maroon Fans, Holder was very appreciative of the support that the team has received throughout the region during the recently concluded international home season. He said,

“While it may be impossible to get a moment like this with each and every one of you, I want you all to know that your love and your support doesn’t go unnoticed. We do adore and we do appreciate! I just want to keep encouraging you guys to come out and support us. All the best to all of you.”