The Home of West Indies Cricket
News
/
Special Feature
/
“Although I am saddened by your decision I totally respect it.” - Coach Phil Simmons on Kieron Pollard's retirement

“Although I am saddened by your decision I totally respect it.” - Coach Phil Simmons on Kieron Pollard's retirement

While tributes poured in from around the world for the now-retired West Indies Men’s white-ball captain, Kieron Pollard, there was still one tribute fans were eagerly waiting to hear. It was that of West Indies Head Coach, Phil Simmons. But on Sunday, the wait was over as Coach Phil broke his silence when he took to Facebook to pay homage to his compatriot. 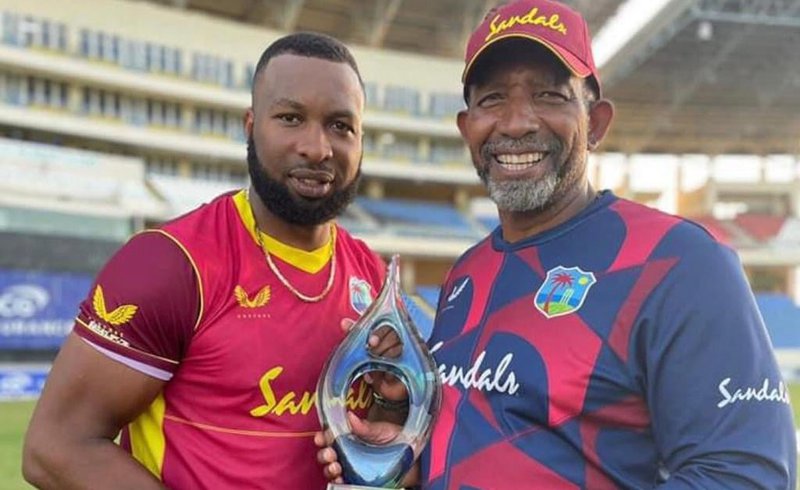 Since taking on the captaincy in 2019, “Polly” - as his teammates and fans fondly called him - led the West Indies for 24 ODIs and 39 T20Is. For 63 matches, not to mention countless practice days and team meetings, Kieron and Coach Phil worked closely together to lead the West Indies white ball teams to a resurgence in the shorter formats. Far from a walk in the park, they were met with turbulences of bubbles, strict restrictions and challenges brought about by the COVID-19 pandemic. But, these unprecedented times only served to cement their pre-existing bond and build a stronger tower of trust between the former two West Indies all-rounders.

That’s why it’s unsurprising that Coach Phil expressed sadness in response to Pollard retiring “from the Maroon shirt so early”. 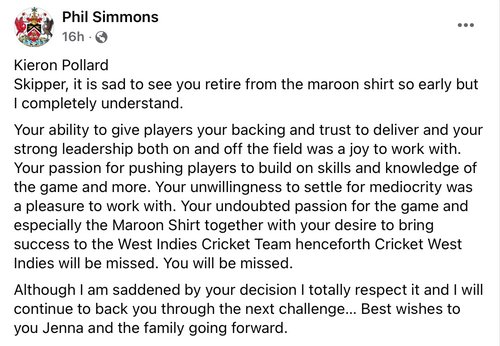 The passionate and charismatic leadership style that Pollard brought to the team saw a spirited performance from a team of youngsters that he started molding since taking over the captaincy.

“Your ability to give players your backing and trust to deliver… your passion for pushing players to build on skills and knowledge of the game and more. Your unwillingness to settle for mediocrity was a pleasure to work with.” Simmons recounted.

Simmons ended his tribute to Pollard by pledging his continued support,

Pollard hangs up his Maroon jersey after 224 matches for the West Indies which includes an ICC T20 World Cup title in 2012. And recently in 2021, he etched his name in history when he became the first West Indian and fourth player to hit six 6s in an over in international cricket.

West Indies is scheduled to travel to The Netherlands next for a three-match One Day International series starting on May 31 in Amstelveen.