Did you catch the highlights of the 2nd Sandals T20I? If not, check out the quick, Suzuki powered highlights below !

Need more of the action? See the extended version below!

BASSETERRE, St. Kitts – Reigning World Twenty20 champions WINDIES failed in their bid for a series-levelling victory in the Sandals Twenty20 International Series, as a destructive spell from Chris Jordan undermined their batting and paved the way for an England 137-run victory in the second match today here.

Chasing 183 for victory, the WINDIES, unlike their opponents, failed to recover from a shaky start and were bowled out for 45 in 11.5 overs – their lowest ever T20I total and the second lowest ever in T20Is – replying to England’s 182 for six from their allocation of 20 overs before a near capacity crowd at Warner Park.

Jordan, the Barbados-born fast-medium bowler, put a huge dent in the WINDIES’ plans from early, when he grabbed 4-6 from his two overs to leave the home team scrambling on 22 for six at the end of the Power Play overs.

No WINDIES batsman reached 20, as the home team suffered an inexplicable batting collapse, giving England an unbeatable 2-0 lead in the three-match series which concludes on Sunday at this venue.

The WINDIES were put on the back-foot from the time talismanic opener Chris Gayle was caught at mid-on for five in the third over, chipping a drive off left-arm fast-medium bowler David Willey.

Two deliveries later, Shai Hope was caught at mid-wicket for seven, trying to whip the same bowler over mid-wicket to leave the WINDIES 13 for two.

The real damage to the WINDIES pursuit occurred, when Jordan had left-hander Darren Bravo caught behind and WINDIES captain Jason Holder lbw – both for ducks – off successive deliveries in his first over.

He followed up with the scalps of Nicholas Pooran caught behind and Fabian Allen caught at slip – both for one – in the space of five deliveries in his next over.

Shimron Hetmyer and Carlos Brathwaite were the last two bastions of hope for the WINDIES, but they both fell for 10 to ill-advised pull shots and the visitors duly wrapped up the tail to claim the fourth highest margin of victory ever in a T20I.

Earlier, Allen, bowling his uncomplicated left-arm spin, triggered an early stumble for England that left them on 32 for four in the sixth over.

He grabbed 2-29 from four overs before Player-of-the-Match Sam Billings hit a career-best 87 off 47 balls that included 10 fours and three sixes, and shared successive half-century stands with Joe Root and David Willey to beef up the England total.

Cottrell made the breakthrough for the WINDIES, when Jonny Bairstow was caught at short third man for 12 in the third over, slicing a drive, and Allen struck in his first over, the third of the innings, when he had Alex Hales caught at backward square leg for six from a top-edged sweep.

Carlos Brathwaite also struck in his first over, when he had England captain Eoin Morgan caught down the leg-side for one in the fourth over, and WINDIES tightened their grip, when Joe Denly was bowled for a duck from an inside edge, essaying a back-foot drive in the fifth over.

But the WINDIES failed to make further inroads into the England batting, as Billings came to the crease and with Root, whose 55 from 40 included seven boundaries, put on 82 for fifth wicket.

A brilliant throw from Allen, running around the wide long-on boundary, to keeper Hope saw the Root run out going for a second run in the 16th over.

But Billings shared 68 for the sixth wicket with Willey, surviving a chance on 75 to Hetmyer at extra cover off debutant left-arm fast-medium bowler Obed McCoy in the final over, before he was caught behind off the last ball of the innings off the same bowler.

So much to see and do while in St. Kitts - St. Kitts Music Festival; An experience like no other. 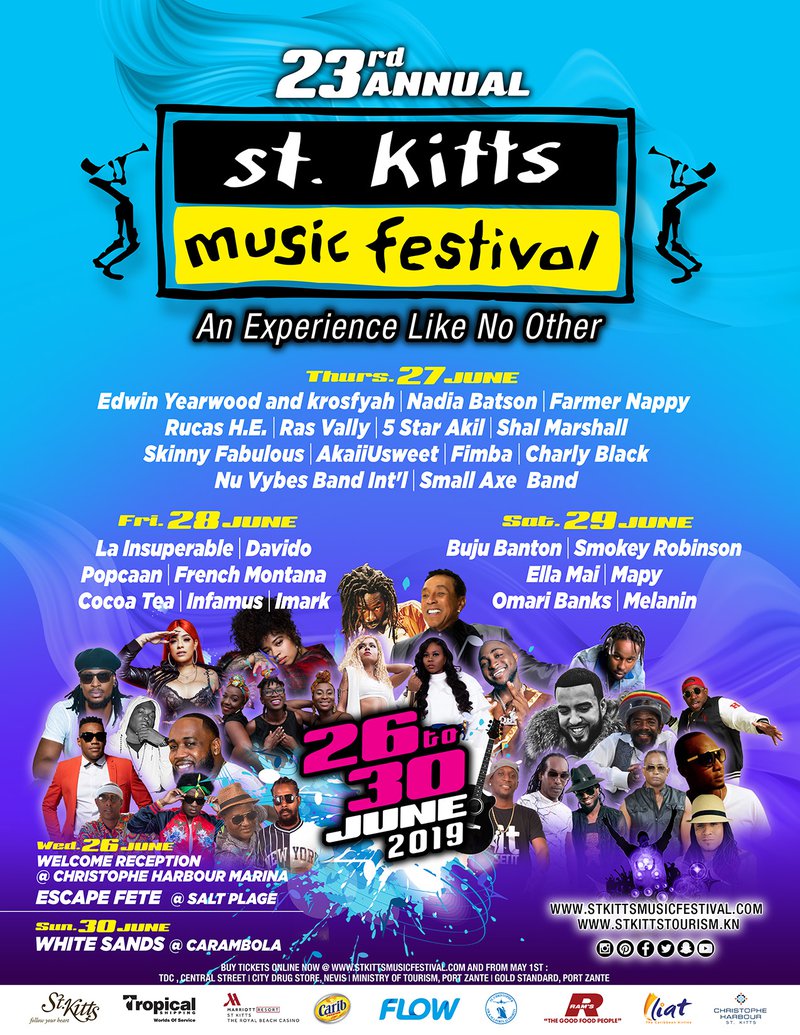