Jacqueline Williams will create more cricketing history when she joins the team of match officials for the final of the ICC Under-19 Cricket World Cup final at the Sir Vivian Richards Stadium. The 45-year-old Jamaican entered the history books when she became the first woman to stand in a U19 World Cup match earlier in this tournament. 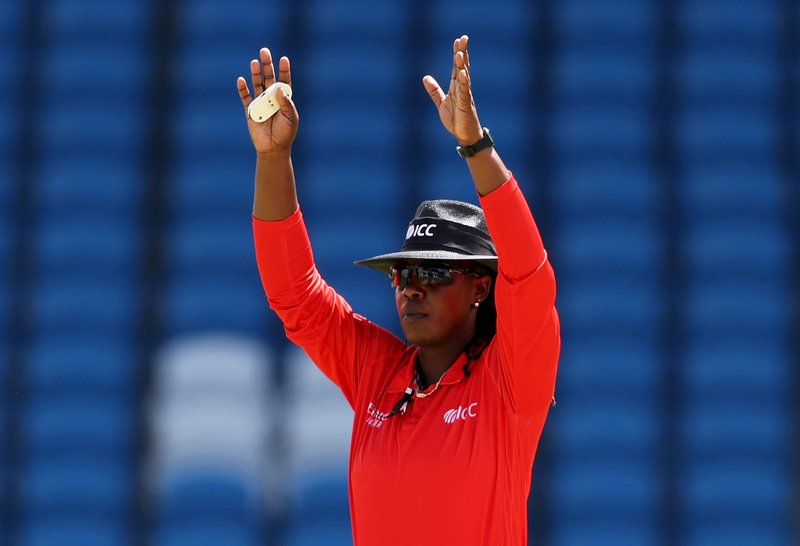 On Saturday she will be the fourth umpire in the eagerly anticipated final between the two unbeaten teams England and India. The on-field umpires will be Roland Black of Ireland and Asif Yaqoob of Pakistan, with Rashid Riaz of Pakistan as the television umpire. The match referee will be Graeme Labrooy of Sri Lanka. On Friday, Williams was the television umpire in the third-place play-off between Afghanistan and Australia at the Coolidge Cricket Ground.

“CWI is extremely proud of Jacqueline’s recent achievements of being the first female umpire to officiate at the ICC Men’s U19 Cricket World Cup and to have officiated as fourth Umpire in the finals. She continues to lead the way as a role model for female umpires in region who aspire to perform on the international stage.”

“Jacqueline has some exceptional qualities which allowed her to progress over the years she is committed, a student of the game, and determined to be the best she can be. Her appointments over the years were very deserving because of her work ethics, time and application. Her passion for the game of cricket is one of her pillars, in training she is meticulous and very attentive to details. An excellent ambassador for the game, officiating and the region, assisting others to develop anywhere possible. We congratulate her,” said Peter Nero, the Cricket West Indies Umpires Coach.

Williams is an experienced umpire who has officiated at the regional level for close to a decade. She has also stood at the international level in five Men’s One-Day International, 13 Men’s T20 Internationals, 17 Women’s ODIs and 40 Women’s T20Is.

“For me to be involved it has been a very humbling feeling and something that will be a highlight of my career. I’m particularly excited about this tournament and I’m ready to embrace everything, there is a lot to learn,” she said. “I’m very elated to be given these opportunities. I will take the opportunities to further develop myself as an umpire and hoping my involvement will strengthen the interest of more women and girls to get involved in a career in officiating, be it in cricket and any other sport.”