Where the Super 50 final was won 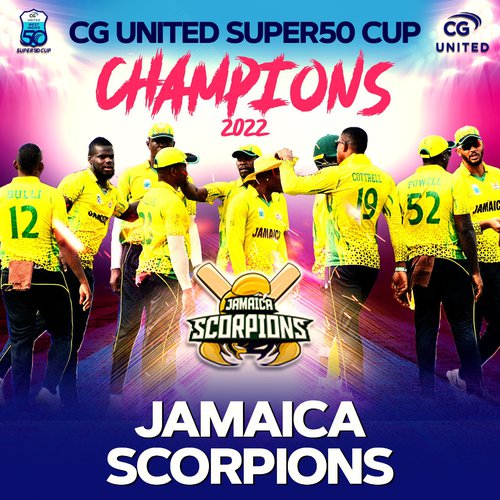 Against all expectations it was the Jamaica Scorpions who emerged victorious in the 2022 CG United Super 50 final. Not only was the victory well deserved but the comfort with which it was achieved was perhaps the most surprising aspect.

That fact notwithstanding there were however some very crucial moments in the game that laid the foundation for the Scorpions victory.

The tone for the Scorpions bowling effort was set by the recalled Merchant. He bowled his 10 overs spell uninterrupted at the top of the innings and played a crucial role in restricting the Trinidad & Tobago Red Force from getting off to a flyer. Whilst wickets were taken by his teammates, Merchant wiled away manfully only going for 23 runs and playing a large part in the Red Force only reaching 70 runs for the loss of three wickets by the 20th over.

It gave the Scorpions the early advantage and it was a position they never relinquished.

Up to that point in the tournament the Trinidad and Tobago captain was the top run scorer in Super 50 and all hopes hinged on his ability to marshal the lower middle order to a respectable total.

Having survived a reprieve when he was caught off an Odean Smith no ball, Pooran promptly lost his wicket a few balls later slashing at a ball outside his off stump to the same bowler. The dismissal left the Red Force 101/5 and in need of an unlikely rescue job. Considering the lower order hadn’t batted many balls throughout the tournament the task of setting a winnable total from therein was always likely to prove beyond them.

Yannic Cariah steps on his stumps

For all the importance of Pooran’s dismissal, some would say that Yannic Cariah’s unfortunate dismissal was more important. Well set on 43 having compiled a 56-run partnership with Akeal Hosein. The pair had looked in little to no trouble as they attempted to rebuild the Red Force innings. However, Cariah erred when he went too deep in his crease to a Nicholson Gordon delivery and disturbed the bails.

Given Cariah was the Red Force innings top scorer the significance of his dismissal cannot be understated. Only 60 more runs were added from that point onwards as the Red Force failed to bat out 50 overs.

Chadwick Walton and Andre McCarthy come to the party

Throughout the Super 50 tournament the Scorpions had relied on Brandon King and/or Rovman Powell to play match winning innings to get the Scorpions over the line. There was always a doubt about what would happen if neither came to the party in the final. However, the experienced duo of Walton (80) and McCarthy (55) assuaged those fears with the key innings in the Scorpions reply.

The two put on a partnership of 126 for the second wicket to take the drama out of the chase and when Walton fell for 80 in the 37th over the game was all but done. His innings proved to be the match winning knock and he was rightly awarded the man of the match.

For the Scorpions it was vindication for what had been a squad effort throughout the tournament. Whether it was with the ball or the bat someone was able to put their hand up each game to get the team over the line.

If catches win matches then the inverse is also true. Drop catches lose you matches. At a time when the Red Force needed some inspiration to break the Walton and McCarthy partnership both Darren Bravo and Pooran shelled chances that should have been taken. There is no guarantee that the Red Force would have won the match with those chances being taken. However, given the late wobble the Scorpions experienced maybe that would have come earlier if the Red Force hadn’t fluffed their lines in the field.

This issue was further compounded when Jason Mohammed also dropped a chance late on. There can be no doubt the Jamaica Scorpions were the better side in the final but the Red Force will certainly feel they shot themselves in the foot on several occasions.