The players in the West Indies U19s Rising Stars camp got some game-time on Thursday with a 50-over warm-up match at the Coolidge Cricket ground. After two days of intense net sessions and fitness routines, the 28 squad members got their first taste of competition with an intra-squad match. 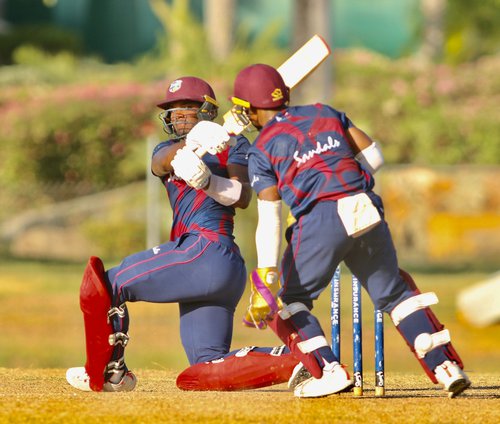 Opening batsman Anderson Armudan was the stand-out performer with a well-made half-century on a good batting surface. The strongly built right-hander topscored with 77 off 110 balls with eight fours in 2 ¼ hours at the crease. He shared a century opening stand with Shaq Parris, who made 42 off 61 balls with four fours and a six. They looked solid at the crease and led the Giovonte DePeiza Team to 212-4 off 42.3 overs to win by six wickets against Ackeem Auguste Team, who made 210 all out after being asked to bat first.

The partnership ended when Parris was smartly stumped by Carleon Bowen-Tuckett as he advanced down the pitch and missed a delivery from Amrit Dass. Teddy Bishop then showed his class with a number of well-timed strokes on both side of the wicket as he strolled to a run-a-ball 40 with five boundaries.

Leg-spinner Matthew Nandu then snapped up three wickets as he bowled Bishop with a delivery which kept low and defeated the batsman; had Armudan caught in the deep as he attempted to clear the on-side; and Kyle Kissondath was caught by Nathan Edward. Nandu ended with 3-20 off nine overs to end with the best figures for the day.

The first half of the match was dominated by a face-saving partnership between Edwards and fellow left-hander Anderson Mahase. The pair came together at 118-8 and added 80 for the ninth wicket to save the innings. Mahase made 61 not out off 72 balls with five fours and a six, while Edward contributed 25 off 22 balls including back-to-back boundaries.

The next warm-up match will be played on Monday at the same venue as they continue preparations for the ICC U19 Cricket World Cup. Cricket West Indies will host the 14th edition of the for the first time ever, as the event which showcases the future stars of the game will see 16 teams travelling to the Caribbean to compete in 48 matches from January 14 to February 5 across four host countries.

The four host countries have been confirmed as Antigua, Guyana, St Kitts and Nevis and Trinidad with 10 venues hosting matches. The format will see the top two teams from each of the four groups advance to the Super League while the remaining teams feature in the Plate across 23 days of competition.