West Indies go under to Aussies in World Cup opener 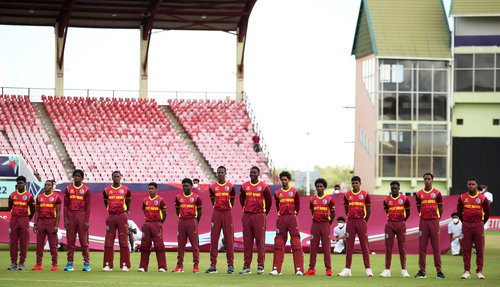 Captain Ackeem Auguste struck a half-century but West Indies Rising Stars U19s struggled with the bat went under to Australia Under-19s in their opening match of the ICC Under-19 World Cup on Friday.

The hosts made 169 all out to be bowled out in the 41st over at the Guyana National Stadium, with the left-handed Auguste stroking a fluent 57 from 67 balls. Wicketkeeper Rivaldo Clarke looked solid and the crease in with 37 from 42 balls while McKenny Clarke arrived late to smash a swift 29 from 35 balls.

In reply, opener Teague Wyllie made an unbeaten 86 as Australia Under-19s strolled to their target in the 46th over. Nivethan Radhakrishnan – the left-hander batsman and ambidextrous slow bowled – followed up his earlier three-wicket haul with 31 while Cooper Connolly made 23 after also taking a three-wicket haul with his left-arm spin.

West Indies lost early wickets and were 12-3 in the sixth over after Matthew Nandu edged the second ball of the morning from Tom Whitney (3-20) and was caught behind without scoring, and Teddy Bishop (5) and Shaqkere Parris (4) followed.

A debut World Cup half century to the Skipper Ackeem Auguste digging deep for his team! #WIRisingStars #WIU19vAUSU19

With a half-century in the last warm-up, Auguste extended his good form, hitting eight fours as he put on 95 with Rivaldo Clarke whose knock included four fours. Arriving at Number 9, McKenny Clarke opened his shoulders with two fours and three sixes to gather precious runs towards the end for his side.

Fast bowler Johann Layne then produced an early strike for the hosts, getting Corey Miller to play on without scoring in the third over, before his new-ball pace partner Shiva Sankar had Isaac Higgins (9) caught at the wicket in the eighth over at 21-2. Wyllie, faced 129 balls and hit eight fours while adding 53 for the third wicket with Connolly and 75 for the fourth wicket with Radhakrishnan.

By the time Nandu had Radhakrishnan taken at point from his off-spin in the 39th over, victory was out of West Indies grasp and Willie took the Australians safely over the line.

The West Indies Rising Stars U19s will now travel to St Kitts where they face in their second match at Warner Park on Monday.