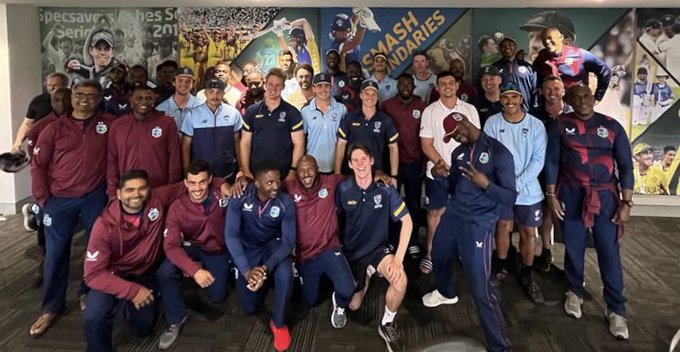 To mark International Men's Day, West Indies paid special honor to the organizers of the warm-up match against the ACT/NSW XI at Philip Oval in Canberra on Saturday. The team presented special souvenirs at the end of the three-day match, which formed part of the preparations for the two-Test series against Australia.

As part of its mantra to celebrate the spirit of the game, West Indies players interacted with their young opponents as well as several fans who attended the final day’s play.

To mark International Men's Day, West Indies paid special honor to the organizers and caterers of the warm-up match.

Special souvenirs presented at the end of what was a great three days of cricket at Philip Oval in Canberra.#SpiritOfCricket #InternationalMensDay pic.twitter.com/YNUo3P6H67

“Today as we mark International Men’s Day we want to show our appreciation for all the great men who have dedicated their time and efforts to the game of cricket. On cricket fields all across the world many men have enjoyed playing the game and off the fields several others also help to organise and ensure things are in place.”

“Today at Philip Oval here in Canberra we honored the unsung heroes on the ground staff, the organizing and logistics crew and the caterers, who worked tirelessly to make sure the game was a huge success.”

The awards were presented by allrounder Jason Holder and Zeph Nicholas, the longstanding massage therapist.