The Home of West Indies Cricket
News
/
Title race heats up! Barbados and Jamaica on fire in T20 Blaze

Title race heats up! Barbados and Jamaica on fire in T20 Blaze

PROVIDENCE, Guyana – Victories for Barbados and Jamaica in the third round of Cricket West Indies Women’s T20 Blaze, has the title race excitingly poised going into the final two rounds. In the first match on Saturday at the Guyana National Stadium, Barbados inflicted a 10-wicket victory on the Windward Islands. Shanika Bruce and Aaliyah Alleyne steamrolled the Windwards picking up five wickets between them. However, wayward bowling allowed the Windwards to gain 28 extras, taking them to a total of 87-6 from their allotted 20 overs.

Skipper Afy Fletcher (30) and Zaida James (23) were the backbone of the Windwards batting performance. The pair posted a 64-run partnership for the third wicket. Bruce was the most successful Bajan bowler with figures of 4-1-13-3, while Alleyne had 4-1-6-2. 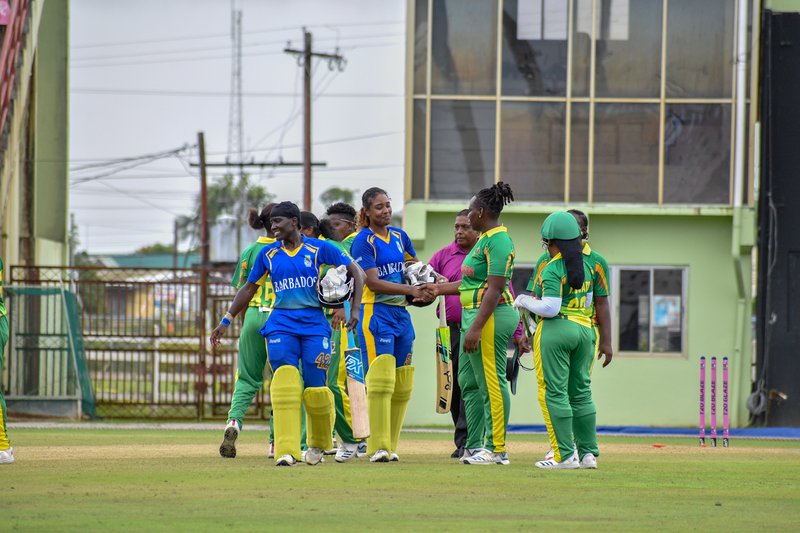 The Barbados openers knocked off the 88-run target in 11.3 overs. Kycia Knight looked in vintage form, opening the face of the bat to guide the ball for a well-played 32 off 36 balls with two fours and a six. Captain Hayley Matthews continued her good run of form, smashing 41 off 34 balls with four boundaries.

A solid unbeaten innings from Rashada Williams gave Jamaica Women a comfortable win over home team Guyana in the day’s second contest.  Asked to make 91 for victory the Jamaica got there with 13 balls to spare and record their third win. They are alongside Barbados at the top of the points table.

Williams made the run-chase look easy, as she together with Chedean Nation shared a 68-run partnership. Williams struck six fours on her way to 41 from 52 balls and Nation with 32 off 39 balls with four boundaries. Tremayne Smartt was the “smartest” bowler for Guyana finishing with figures of 4-0-12-2. 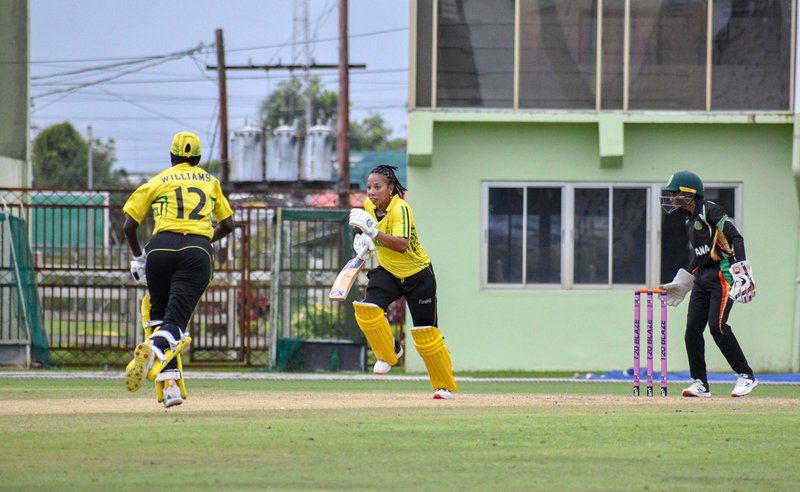 Earlier, Chinelle Henry put her side on the road to victory with impressive figures of 4-0-12-3 with the new ball alongside Corrine Howell who also impressed with 4-0-19-2. The Guyana top-order collapsed, leaving them at one point tottering on 36-5 but Shabika Gajnabi and Cherry-Ann Fraser rebuilt their innings.

Fraser retired not out but not before a 39-run partnership with Gajnabi, as Guyana posted 90-6 from their 20 overs. Gajnabi remained not out on 29, while Fraser had the next best score of 20 not out. The defeat was impactful for the home team as they saw their hopes of winnings the title reduced significantly. They now have two points from three matches – two defeats and a wash-out.

Trinidad and Tobago earned their first win of the tournament in a nervous battle with the Leeward Islands. Being sent in to bat first, Trinidad and Tobago were staring a batting collapse head on. At one stage they were 36-5, their entire top-order back in the dugout courtesy Tiffany Thorpe and Rozel Liburd, who picked up two wickets each.

However, a 53-run sixth wicket partnership between Lee-Ann Kirby and the debutant Djenaba Joseph, resuscitated life back into the innings. This partnership ensured their total crossed 100, giving their bowlers a decent target to defend. Kirby was run out for 26 off 25 balls (3x4) and Joseph ended on 23 off 44 balls (2x4). Thorpe had figures of 4-0-10-2 while Liburd had 4-0-14-2. 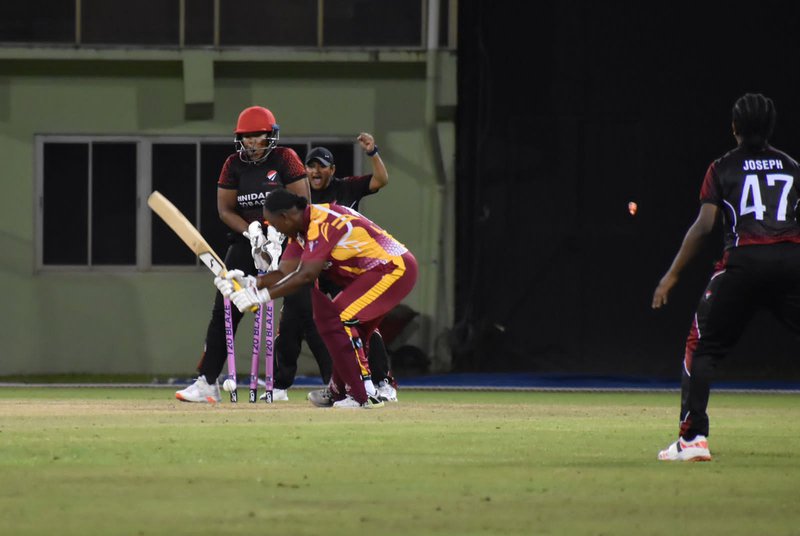 Jenison Richards and interim captain Saneldo Willett were the only Leewards players to reach double figures as the Trinidad and Tobago bowlers were consistent in their line and lengths. Richards struck two fours on her way to a 32-ball 24, while Willett also struck two fours in 19.

Spinners Karishma Ramharack 4-1-4-3 and Steffie Soogrim 4-0-17-2, had the Leewards caught firmly in their web, as they led Trinidad and Tobago to victory.

Points standings after Round 3 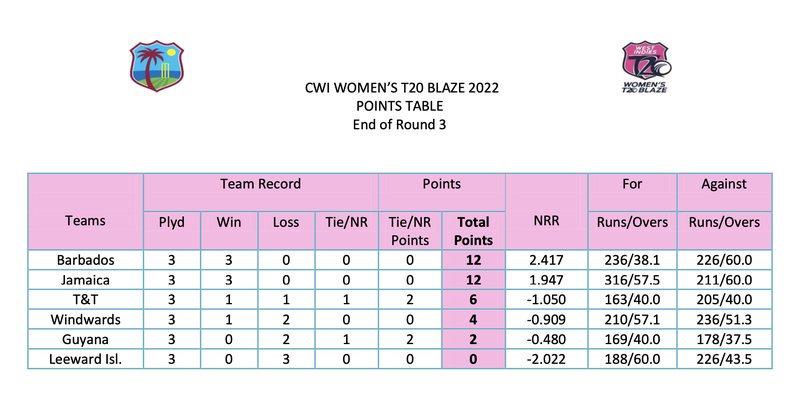